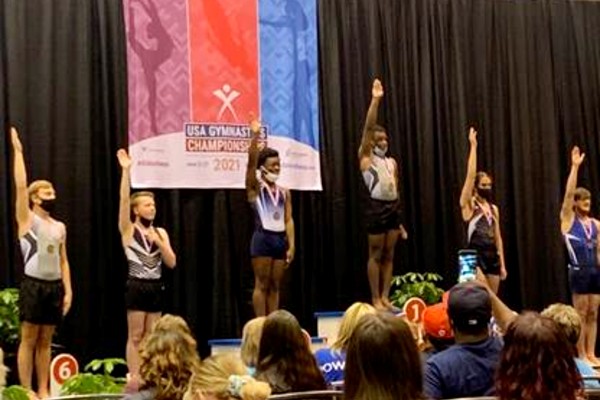 He was named to the Junior National Team during the June 21-27, 2021, National Tumbling and Trampoline Championships in St. Louis.

Carter represents the Wendy Hilliard Gymnastics Foundation (WHGF) while Mensah is a WHGF scholarship athlete, they both train at CAVU with renowned coach Roger Walker, who offered to train the WHGF athletes due to the COVID shutdown of the WHGF facility in Harlem.

Carter, 14, soared during both Tumbling preliminaries and finals to claim the best-of-the-best in the country in his division.

Mensah had a stellar showing in St. Louis – to go along with two top placements in major competitions this season – to nail down a spot on the highly-coveted Junior National Team for both Tumbling and Double Mini Trampoline.

“It was very exciting for BJ to make the National team and it’s quite an honor. It means you can represent our country in international competition.”

“I’m very proud of all our athletes who went,” Hilliard added. “It’s very, very difficult to compete on this level. All our kids came through. Most importantly, they were able to attend the National Championships that were being held along with the USA Olympic Gymnastics Trials. They were able to see Simone Biles win her Olympic Trials and to see all of the top athletes.

“It put them in a situation where they could be with the country’s best athletes in all types of gymnastics. I’m sure it motivated them to see the Olympic Trials and see the men and women who were going to make the Olympic team.”

Please click HERE to see both Carter and Mensah perform during the recent National Tumbling and Trampoline Championships.

This marked the first time Carter qualified for the National Tumbling and Trampoline Championships, while Mensah is as a multiple qualifier and recognized as the 2019 National Champion in Tumbling.

The five WHGF qualifiers earned a trip to the nationals by virtue of recent outstanding performances in either New York State Championships or the Regional Championships.

This year WHGF in New York City is celebrating its 25th anniversary. WHGF is headquartered in Harlem and has a location in Hilliard’s hometown of Detroit, which opened in 2016.

Since its inception, WHGF has provided FREE and low-cost gymnastics to underserved communities, serving nearly 25,000 urban youth to date.

Born and raised in Detroit, Michigan, Wendy started gymnastics at age 12. She trained through the Detroit Recreation Department with coaches from the former Soviet Union.

She was the first Black to represent the U.S. in international competition in rhythmic gymnastics and competed in three World Championships.

In 2008 she was inducted into the USA Gymnastics Hall of Fame. Following her competitive and award-winning experience as a world-class athlete and coach, Wendy recognized the lack of gymnastic opportunities among urban youth, which inspired her to launch the Wendy Hilliard Gymnastics Foundation in 1996 in Harlem, New York, and expanded to Detroit in 2016. 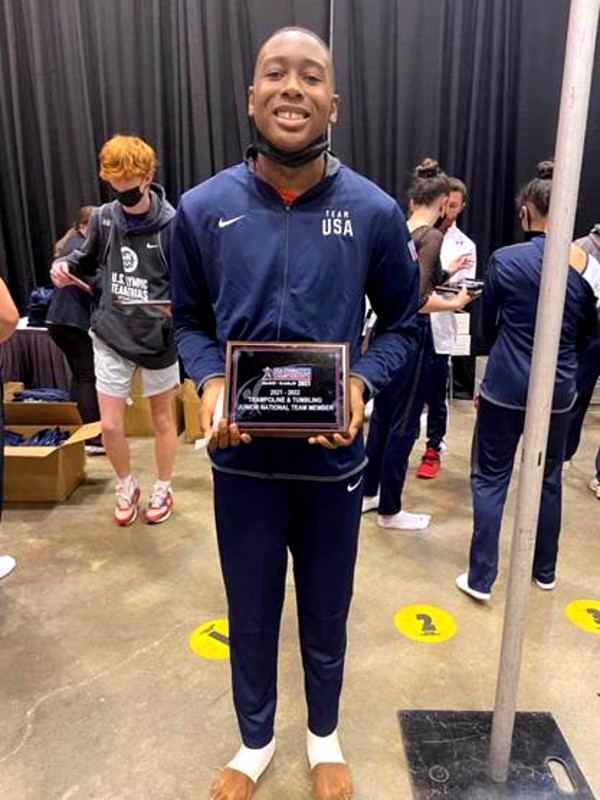 Throughout the years, WHGF has developed elite athletes and competitive gymnasts who have gone onto the global stage, including current WHGF head coach Alexis Page who was on the U.S. Rhythmic Gymnast National Team.

Alexis Page joined the WHGF foundation in 2003, and by 2012, she started teaching to inspire the young gymnasts to chase after their dreams, as she did.

Left photo: 1) ZaQuae Carter (on top podium) is recognized as the country’s No. 1 Tumbling sensation in the 15-and-over division while (right) 2) Bailey Mensah earns selection to the Junior National Team. By Photos courtesy of WHGF.