Democratic voters in East Harlem, one of the country’s most diverse and economically challenged communities, picked Joe Biden as their first choice for the 2020 Democratic presidential nomination, in a poll released today. Biden received 30.5% of the first-place votes, followed by Elizabeth Warren (22.9%), Bernie Sanders (17.8%) and Kamala Harris (14.4%). The poll was conducted by Union Settlement (www.unionsettlement.org), the oldest and largest social service provider in East Harlem.

“So far in this electoral cycle, almost all of the attention has focused on the largely rural “early voting” states – Iowa, New Hampshire, Nevada and South Carolina,” said David Nocenti, Executive Director of Union Settlement. “There is a great risk that the presidential field will be narrowed significantly without any test of the candidates’ strength in dense, low-income urban areas like East Harlem, and that’s why Union Settlement decided to conduct this poll.”

“Union Settlement has been serving the residents of East Harlem and its surrounding communities for almost 125 years, and we have always been a strong advocate for the needs of underserved communities everywhere,” said Mr. Nocenti. “We believe it is important that the voices of these communities be heard.”

The online poll, which was conducted from July 10-19, was completed by over 150 East Harlem residents who were asked to rank the candidates in order of preference and to respond to certain demographic questions. Of those respondents, 118 were Democratic “likely voters.” [1] 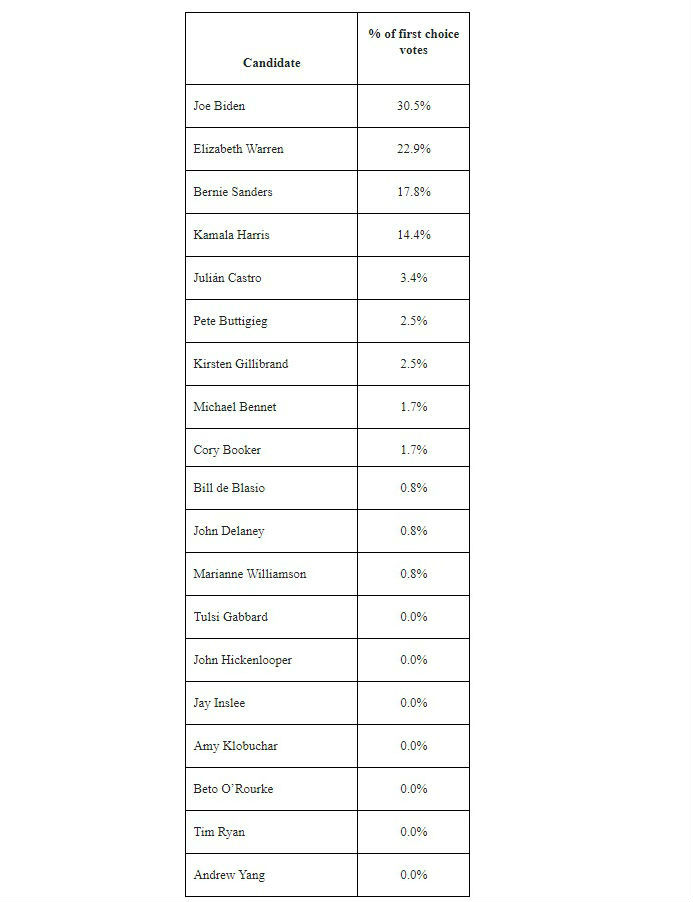 Although there was a clear divide between the top four candidates (Biden, Warren, Sanders, and Harris) and everyone else in terms of first-place choices, the Union Settlement poll was a “ranked preference” poll, allowing respondents to rank as many choices as they wished in order of preference.  This shows the potential strength of candidates who might not be the top choice of many voters, but who have broad overall appeal and are ranked high consistently across the board.

Kamala Harris and Cory Booker demonstrated the breadth of their support in this way, with Harris rising from 4th place to 2nd place, and Cory Booker from 9th place to 3rd place, based on their average ranking.  In addition, Pete Buttigieg and Julián Castro substantially narrowed the gap with the top-tier candidates.  Bernie Sanders, in contrast, dropped from 3rd place to 7th place once voters’ other preferences were considered.

The following chart shows the average point totals[3] for all 19 candidates: 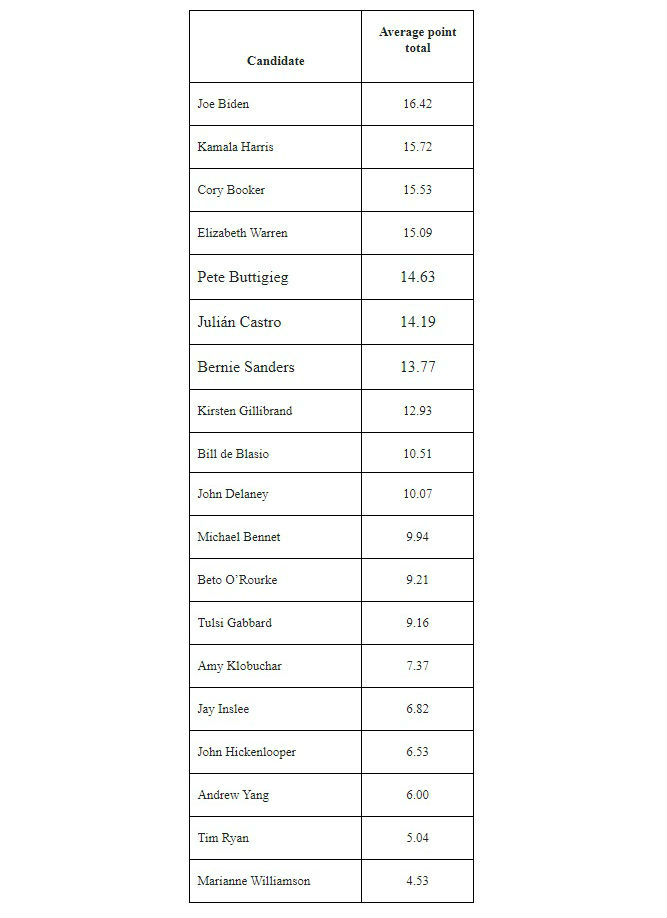 Union Settlement serves individuals not just from East Harlem, but also from surrounding communities, and the Democratic primary results were similar when the responses of those voters (165 total) were counted.

Union Settlement works hard to solicit and amplify the voices of local residents.  For example, every two years Union Settlement conducts a survey of the participants in its programs, including asking about the issues of most concern to them.  In the most recent survey in 2018, the respondents indicated that their top concerns were improving schools, reducing crime, building more affordable housing, creating jobs, and providing affordable health care.