Harlem’s The Cathedral Of St. John The Divine Rings In 2022 Virtually With New Year’s Eve Concert For Peace 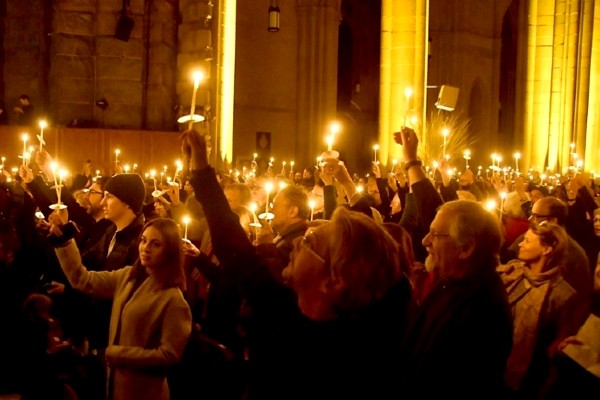 The Cathedral of St. John the Divine closes out the year with celebration and song online with the annual New Year’s Eve Concert for Peace.

The New Years’ Eve Concert for Peace, a NYC tradition founded at the Cathedral by Leonard Bernstein in 1984, is a joyous tradition with the music of inspiration and social conscience.

The 2020 in-person concert was postponed due to the pandemic. For 2021, the emerging Omicron variant has prompted the Cathedral to transform the performance into a free online offering for all to safely enjoy from home.

This year’s concert will be hosted by renowned journalist and Cathedral friend, Harry Smith and features the Cathedral Choir and Orchestra with vocal soloist Jamet Pittman.

Kent Tritle is one of America’s leading choral conductors. Called “the brightest star in New York’s choral music world” by The New York Times, Kent is Director of Cathedral Music and Organist at the Cathedral of St. John the Divine in New York City and Music Director of the Oratorio Society of New York.

In addition, he is marking his 15th season as Musica Sacra Music Director and is Director of Choral Activities at the Manhattan School of Music. An acclaimed organ virtuoso, Kent Tritle is the organist of the New York Philharmonic, a member of the organ faculty of the Manhattan School of Music, and a member of the graduate faculty of The Juilliard School.

Kent Tritle founded the sacred Music in a Sacred Space series at the Church of St. Ignatius Loyola, leading its choir and orchestra in 150 concerts from 1989 to 2011. From 1996 to 2004, Tritle was Music Director of the Emmy-nominated Dessoff Choirs. Kent hosted “The Choral Mix with Kent Tritle,” a weekly program devoted to the vibrant world of choral music, on New York’s WQXR from 2010 to 2014.

Kent is the 2020 recipient of Chorus America’s Michael Korn Founders Award for Development of the Professional Choral Art. Other recent honors include the 2017 Distinguished Achievement Award from Career Bridges and the 2016 President’s Medal for Distinguished Service from the Manhattan School of Music. Kent is on the advisory boards of the Choral Composer/Conductor Collective (C4) and the Clarion Music Society, and was the 2016 honoree at Clarion’s annual gala.

Kent Tritle holds graduate and undergraduate degrees from The Juilliard School in organ performance and choral conducting. He has been featured on ABC World News Tonight, National Public Radio, and Minnesota Public Radio, as well as in The New York Times and The Wall Street Journal. He was featured in Episode 6 of the first season of the WIRED video series “Masterminds,” an installment titled, “What Conductors Are Really Doing.”

Bryan Zaros is a young American conductor recognized for his “strong musical imagination” and “deep sense of musicality and communication.” He is the Associate Choirmaster at the Cathedral of Saint John the Divine and made his conducting debut with the Cathedral Choirs at Westminster Abbey, London. A native New Yorker, Zaros began his professional musical training as a member of the Metropolitan Opera Children’s Chorus and as a boy chorister at The Church of the Transfiguration, NYC.

He is the Music Director of the Pro Arte Chorale, an ensemble with a 55-year legacy specializing in the performance of choral/orchestral masterworks and is a frequent guest lecturer at the Manhattan School of Music and at music conferences throughout the USA.

He received a Bachelor of Music in Sacred Music from Westminster Choir College and a Master of Music in Conducting from the University of Michigan. He is currently a candidate for the Doctor of Musical Arts degree in Conducting at the Manhattan School of Music. Recent conducting engagements have included invitations with choirs and orchestras in England, Italy, Switzerland, Canada, Sweden, Argentina, Greece, Slovenia, Ireland and Romania.

Most notably he has conducted ensembles at Alice Tully Hall-Lincoln Center, the National Cathedral in Washington D.C., at American Choral Director’s Association Conferences and various cathedrals in England including St. Paul’s Cathedral-London, Canterbury Cathedral and Salisbury Cathedral. He is a recipient of several conducting awards including an American Prize award in Conducting. For more information about Bryan, visit www.bryanzaros.com.

Jie Yi, a member of the Music Department at the Cathedral of St. John the Divine and the Music Director at Unitarian Universalist Fellowship of Huntington, holds a Doctor of Music Arts degree in conducting from Manhattan School of Music, mentored by Kent Tritle. He is the author of Chinese for Singers, the first comprehensive guide for Western singers to use in singing Chinese texts. In China, he was Chorus Master and Assistant Conductor at the Shanghai Opera, and a teacher at the Shanghai Conservatory of Music.

In 2006, he was selected by the Internship and Overseas Fellowship for Young Conductors to study with Maestro John Nelson in Paris, sponsored by the U.S. China Cultural Institute. In 2010, he received the Huang He Fellowship sponsored by Asian Culture Council to study at the Metropolitan Opera under Chorus Master Donald Palumbo.

Jamet Pittman, soprano, earned both B.M and M.M. degrees in Voice from The Catholic University of America. While there, she competed in the Metropolitan Opera National Council Auditions and one of the judges took note and invited her to study in New York at the Manhattan School of Music, where she was a Paul Robeson Scholarship recipient. Since then, Ms. Pittman has performed as a classical soloist and also in professional choral groups, such as Musica Sacra, NY Choral Artists, and the esteemed Choir of St. Ignatius Loyola.

She has also performed on Broadway (Baz Luhrmann’s “La Boheme”), and in non-classical genres with the group “Just Friends” (specializing in music from the African-American experience). More recently, Jamet was part of “3 Mo’ Divas,” which was showcased in a PBS special, and showed her ability to sing several styles, including opera, musical theater, spirituals and R&B.

In 2019, she performed as part of Jason and Alicia Hall Moran’s “Work Songs” exhibit at the Biennale Art Festival in Venice, Italy. Jamet is honored to be a member of the professional Choir of the Cathedral of St. John the Divine.

Mount Sinai advances medicine and health through unrivaled education and translational research and discovery to deliver care that is the safest, highest-quality, most accessible and equitable, and the best value of any health system in the nation.

The Mount Sinai Hospital is ranked on U.S. News & World Report’s “Honor Roll” of the top 20 U.S. hospitals and is top in the nation by specialty: No. 1 in Geriatrics and top 20 in Cardiology/Heart Surgery, Diabetes/Endocrinology, Gastroenterology/GI Surgery, Neurology/Neurosurgery, Orthopedics, Pulmonology/Lung Surgery, Rehabilitation, and Urology. New York Eye and Ear Infirmary of Mount Sinai is ranked No. 12 in Ophthalmology. Mount Sinai Kravis Children’s Hospital is ranked in U.S. News & World Report’s “Best Children’s Hospitals” among the country’s best in four out of 10 pediatric specialties.

The Icahn School of Medicine is one of three medical schools that have earned the distinction by multiple indicators: ranked in the top 20 by U.S. News & World Report’s “Best Medical Schools,” aligned with a U.S. News & World Report “Honor Roll” Hospital, and No. 14 in the nation for National Institutes of Health funding. Newsweek’s “The World’s Best Smart Hospitals” ranks Mount Sinai Hospital as No. 1 in New York and in the top five globally, and Mount Sinai Morningside in the top 20 globally.

Concerts take place in many locations: the vast space of the Crossing, the more intimate setting of the Great Choir, and the exquisite Chapels of the Tongues. The beloved holiday traditions of the Christmas Concert and New Year’s Eve Concert for Peace are an integral part of our concert series.

During the COVID-19 pandemic, the Cathedral has responded to changing needs in the local community and across the city and state. People from many faiths and communities worship together in daily services held online and in person; the soup kitchen serves roughly 50,000 meals annually; social service outreach has an increasingly varied roster of programs to safely provide resources and aid to the hardest-hit New Yorkers; the distinguished Cathedral School prepares young students to be future leaders; Advancing the Community of Tomorrow, the

No tickets or advance reservations are needed to watch the Livestream.

For more details and information on all the Cathedral’s programs and services, visit stjohndivine.org.