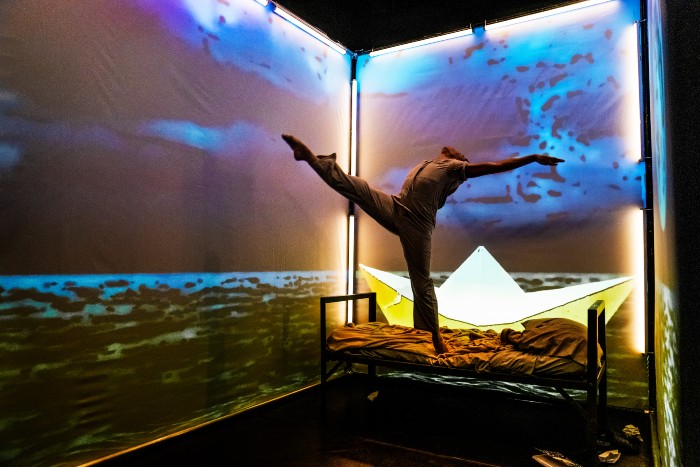 A new ballet from Emmy-nominated choreographer Jeremy McQueen and his Black Iris Project.

The performance will also be streamed via the Schomburg Center’s livestream page.

The new series will allow the institution to expand its artistic footprint and to further develop partnerships and collaborations with artists and other arts organizations.

Loosely inspired by Maurice Sendak’s Where the Wild Things Are children’s book, WILD follows a young boy’s journey as he celebrates his 14th birthday while incarcerated.

Frequently harnessing the power of his imagination, he transports himself to an alternate universe where he is not treated like a wild animal.

This cutting-edge ballet utilizes physical movement to illustrate and honor the history of Black bodies moving through space while encountering oppression and transforms countless men’s stories into an artistic dance work, intended to be a reclaiming of time, unity, space, and Black culture.

“Since its inception in 2016, The Black Iris Project has been committed to telling Black narratives through ballet, using art as a mirror to reflect the times and consistently intertwining themes of social justice in everything we do. As someone who has worked to break through many doors in the world of dance, particularly ballet, I feel it is our duty as artists to be a catalyst for those that are unheard, unseen, and undervalued,” said McQueen. “I am committed to, now more than ever, dismantling those barriers through my art. This fervent effort stems from the need to address issues currently plaguing our nation from civil unrest to systemic oppression to the societal ripple effects of COVID-19. In order for us to heal as a society, we have to expose the wounds that have historically been overlooked. With “WILD” specifically – which I view as a tough work centered around healing – we wanted to continue to uplift diversified voices while breaking down the ivory silos and pillars so that we not only have a seat at the table and our work on the table, but to ensure that the voices of the voiceless are heard and amplified.”

“We are thrilled to partner with the Schomburg to present this work. WILD marks not only the launch of our new LIVE @651ARTS Series, but it will also be the first live in-person performance for 651 ARTS since the beginning of the pandemic. To come back in this way with such a compelling piece from such a dynamic artist is truly a presenter’s dream collaboration,” said Monica L. Williams, 651’s Chief Curator and Director of Programs. “At the core of our mission and DNA is always the artist and true creatives such as Jeremy McQueen will always have a home at 651. As the newest addition to our 2022 season – FOREWORD, FORWARD: A Bridge Season – WILD is the embodiment of this period of transition and transformation for 651 as the organization prepares to move into its first-ever home later this year. I’m so excited to see the response to the piece!”

Tickets for WILD are free but reservations are required; For more information on WILD, please visit www.blackirisproject.org/wild

Founded in 2016 by choreographer Jeremy McQueen, The Black Iris (BIP) is a ballet collaborative and education vehicle that creates new, relevant classical and contemporary ballet works that celebrate diversity and Black history. Based in New York City, the project hosts a team of predominantly artists of color delivering cross-disciplinary and original works.

Championing individuality, the collaborative harnesses the Black Community’s inherent creative spirit to encourage and inspire the youth of color to pursue art. Movement, and music as an expressive outlet and a means for collective healing.

Since its inception, The BIP has been awarded generous support from the Rockefeller Brothers Fund, Ford Foundation, New Music USA, BET, Shea Moisture, CUNY Dance Initiative, and has been featured in New York Times, Elle Magazine, Village Voice, Out Magazine, amongst other publications.

Recently, the film adaption of The BIP’s 2018 ballet A Mother’s Rite received a 2020 Emmy Award nomination from The New York Chapter of the National Academy of Television Arts and Sciences, and Pointe Magazine recognized our Houston, TX debut (Summer 2019) as one of the Standout Performance of 2019: Audience Favorite.

Most recent, The BIP was personally invited by American Ballet Theatre Principal Dancer, Misty Copeland) to perform MADIBA, a new ballet tracing the journey of Nelson Mandela, at The John F. Kennedy Center for the Performing Arts as part of the Ballet Across America festival.

To date, BIP has brought together over a dozen artistic collaborators and 70 performers to create nine original works for over 20 performances around the country.

Jeremy McQueen is an award-winning choreographer, dedicated to story-telling rooted in experience and social engagement.

His work aims to create spaces of comfort, solace, and connection through reflection—a sharing of observations of what is going on around him.

Born and raised in San Diego, California, McQueen is a 2008 graduate of The Ailey School/ Fordham University, B.F.A. in the dance program and has also trained in the schools of American Ballet Theatre, San Francisco Ballet, and Alonzo King’s LINES Ballet.

McQueen is a 2020 Emmy® Award-nominated director/choreographer, a 2019 recipient of the Bronx Council of the Arts’ BRIO (the Bronx Recognizes Its Own) Award, a 2013 recipient of the Joffrey Ballet of Chicago’s Choreographers of Color Award [Winning Works] and two-time finalist of the Capezio Award for Choreographic Excellence (2012 & 2013).

McQueen was recently named a 2020/2021 recipient of the Soros Justice Fellowship from Open Society Foundations and is the only choreographer to receive the fellowship since the fellowship’s inception in 1997.

McQueen has performed in Broadway’s Wicked and The Color Purple, the Radio City Christmas Spectacular, and numerous Metropolitan Opera productions. McQueen cites two influential instructors as a source for his work and creative energy.

From Donald Robinson, McQueen learned his guiding principle of discipline, doing what you know you’re supposed to do even when no one is there to make sure you do it.

At a time when McQueen was struggling to make his way as a dancer, Kazuko Hirabayashi encouraged him to choreograph about it.

It is in the craft of story-telling and making a way for yourself through discipline and focus that McQueen was led to start The Black Iris Project, a space for like-minded artists to reflect their experiences. McQueen is the founding artistic director and choreographer of The Black Iris Project.

As a research division of The New York Public Library, the Schomburg Center features diverse programming and collections totaling over 11 million items that illuminate the richness of global black history, arts, and culture.

For over 125 years, The New York Public Library has been a free provider of education and information for the people of New York and beyond.

With 92 locations—including research and branch libraries—throughout the Bronx, Manhattan, and Staten Island, the Library offers free materials, computer access, classes, exhibitions, programming and more to everyone from toddlers to scholars, and has seen record numbers of attendance and circulation in recent years.

The New York Public Library receives approximately 18 million visits through its doors annually and millions more around the globe who use its resources at www.nypl.org.

Founded in Brooklyn, NY in 1988, the mission of 651 ARTS is to deepen awareness of and appreciation of contemporary performing arts and culture of the African Diaspora, and to provide professional and creative opportunities for artists of African descent.

As part of its commitment to the furtherance of conversations and celebration of Diaspora music, the institution has presented dialogues and performances by Somi, Hugh Masekela, and Grammy-winning artist Betty Carter, to name a few.