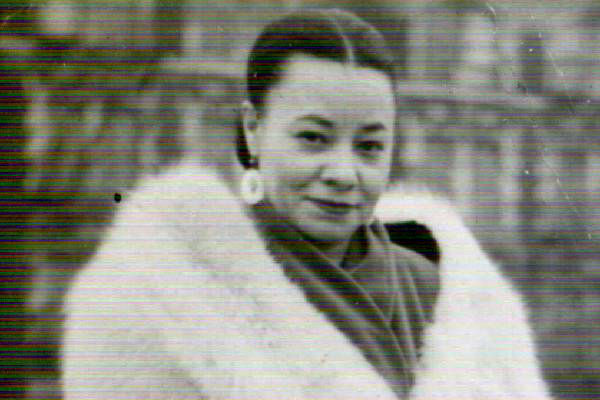 The legendary Mayme Hatcher Johnson was born in North Carolina, in 1915, and moved to Harlem, NY in 1938.

Harlem was where she found work as a waitress at a club owned by singer and actress Ethel Waters.

She met Johnson, who was called “Bumpy” because of a bump on the back of his head, in a Harlem restaurant. In 1948, Mrs. Johnson married Ellsworth “Bumpy” Johnson, portrayed in American Gangster, the 2007 film that focused on another Harlem underworld figure, Frank Lucas.

Her husband died in 1968, and after moving to Philadelphia in 2004, Mrs. Johnson wrote Harlem Godfather: The Rap on My Husband, Ellsworth “Bumpy” Johnson, published in 2008.

Here’s the podcast of an interview with Miller:

“She was tickled pink to tell people she was an author at age 93,” said Henry Perkins, owner of Perks, a restaurant on Manhattan Avenue near 122d Street in Harlem.

“Boy, it really made her proud to finally get that book done.”

The quotes came from the coauthor of the work, Karen E. Quinones Miller, her goddaughter, a former Inquirer reporter and chief executive of Oshun Publishing, which brought out the book.

Miller said the book had been optioned for a movie.

Mrs. Johnson was born near Ashville, N.C., Miller said and moved to New York in 1938, where she became a waitress at Hagar’s, a Washington Heights club owned by actress Ethel Waters. Mrs. Johnson later was a hostess at a Manhattan restaurant.

“Bumpy had just come out of Dannamora,” Miller said after he had served 10 years at that state prison in northern New York.

Mrs. Johnson was having dinner at a restaurant on Seventh Avenue near 122nd Street when Johnson walked in, and though she brushed him off, “he sat down and proceeded to talk about everything in the world,” Miller said.

“She became so fascinated that they left the restaurant together, went to the movies, and that was it. They were married three months later.”

“In the early 1930s,” the review stated, “Johnson got his big break when he was hired as a leg-breaker and bodyguard by the reigning queen of uptown crime, Madame Stephanie St. Clair,” who was among the leaders in the Harlem numbers rackets.

Black past reports that after a gang war, Johnson took over the Harlem rackets “in exchange for protection by the Mafia then led by Lucky Luciano. The arrangement lasted for four decades.”

The Philadelphiia Inquirer writes, “In October that year, we were driving past 116th Street and St. Nicholas Avenue in his Cadillac when he suddenly turned to me and said, ‘Mayme, I think you and I should go ahead and get married.’

“I was stunned, but I kept my composure. I said simply, ‘Is that right?’ He said, ‘Yes, that’s right,’ and kept on driving.”

They were married in a civil ceremony two weeks later. Bumpy collapsed and died of a heart attack in a Harlem restaurant on July 7, 1968.

Mayme, a longtime member of St. Martin’s Episcopal Church in Harlem, was known for her charitable and volunteer activities.”

“Mayme was a class act, and had a big heart,” said Henry “Perk” Perkins, a Harlem restaurateur and close friend of both Mayme and Bumpy.

“She was the sweetest woman in the world, but she didn’t take any nonsense. She carried herself like a real lady and expected to be treated as such.”

Mrs. Johnson is survived by a granddaughter, Margaret; a great-grandson Anthony; a brother, Melvin; and a sister, Lily Andrews.

Mayme Hatcher Johnson, died of heart failure on May 1, in 1994 at Kearsley, a West Philadelphia retirement community in 1994 (source).