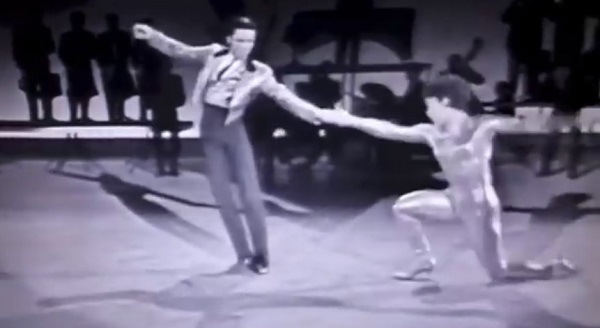 Margo Rodriguez, half of the husband-and-wife team Augie and Margo, who danced the mambo on television and before presidents and helped it evolve from a nightclub craze into popular entertainment.

Augie and Margo’s dance career took shape at the Palladium Ballroom, a haven for Latin music in midtown Manhattan, where they often danced to the music of Tito Puente and his orchestra.

Here’s a video of the two dancers:

In the 1950s, ’60s, and ’70s, the pair were among mambo’s best-known ambassadors, dancing on concert stages, on TV, and in nightclubs worldwide. They appeared repeatedly on “The Steve Allen Show,” “The Arthur Murray Party” and “The Ed Sullivan Show” and opened for entertainers like Harlemite Sammy Davis Jr., Frank Sinatra and Dean Martin in Las Vegas.

At the height of their fame, they danced for Queen Elizabeth II and at the White House for Presidents John F. Kennedy and Richard M. Nixon.

Mambo, a torrid but elegant dance style, was born in Cuba in the early decades of the 20th century. Augie and Margo, who studied different forms of dance when they were not dancing in nightclubs, augmented mambo with elements of ballet, jazz, and modern dance, adding raw physicality and acrobatics worthy of a gymnast.

The hybrid they created sped the development of salsa dancing, one of the most popular forms of Latin dance.

Margarita Bartolomei was born in Harlem on April 6, 1929. She started dancing at about 10. In 1948 she graduated from a trade school in downtown Manhattan. She met Augustin Rodriguez the next year, and he became her dance partner at the Palladium. They won a slew of amateur dance competitions and married in 1950. They later learned other dance styles at Katherine Dunham’s school in Manhattan.

In addition to her son, Margo Rodriguez is survived by two sisters, Alice and Gladys, and two grandchildren.

Augie and Margo mostly retired from professional dancing in 1980. Her son said their last engagement was in the first decade of this century in Las Vegas.

In that show, they’d pose as spectators, then come to the stage when the performers asked for volunteers.

“They would go up,” Richard Rodriguez said, “and bring down the house.”

She died Tuesday in West Palm Beach, Florida. She was 89.

Her son, Richard, said the cause was pneumonia wrote our source.