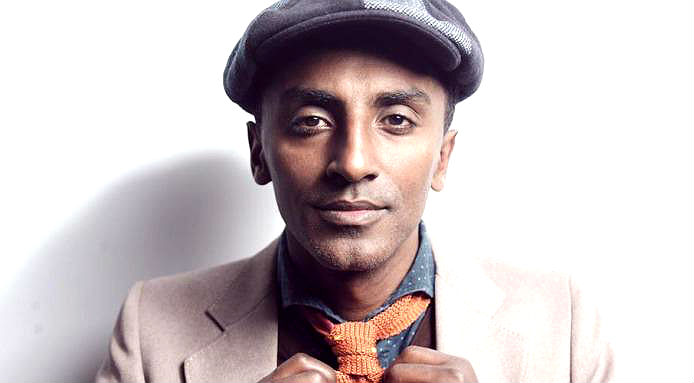 The festival will take place at NeueHouse, at Madison Square – 110 East 25th Street, in New York City, the immigrant capital of the world. Following its debut in New York, NAE will bring the New American Festival to cities across the U.S., including Anchorage, Atlanta, Boston, Kansas City, Nashville, Houston, and Oakland, among others.

Musical headliners, curated by the music community and incubator Treble, represent a cross-section of genres and bold styles, including:

Comedy Central is the official partner for the festival’s comedy programming. They will screen a reel of sketches featuring immigrant artists or relating to the themes of the festival. NAE will also host a stand-up hour featuring:

, this work brings participants into an artificially intelligent room emulating a sitcom set, where a laugh track is triggered whenever someone says something the room’s algorithm deems laughter-worthy.

Smorgasburg, the largest weekly open-air food market in America and the official food partner for the festival, will offer cuisines representing a variety of nationalities and ethnicities. For Freedoms,an artist-run platform for civic engagement, discourse, and direct action for artists, will serve as the official art partner. They will host a town hall that explores the notion of Freedom from Fear through the topic of immigration.

“The festival’s programming celebrates the visionary contributions that immigrants make to the fields of art and culture,” said New American Economy’s Katherine Steinberg. “Immigrants have revolutionized cuisine, and altered our perceptions through convention-breaking comedy, music, literature, and performance. The New American Festival highlights how our cultural diversity is our national strength across each of these fields.”

Festival partners include Artadia—a national non-profit organization that identifies innovative visual artists and supports them with unrestricted, merit-based financial awards and connections to a network of opportunities—and Lingua Franca, who make sustainably-sourced, fair trade luxury cashmere sweaters, all hand-stitched by women in NYC.

According to NAE’s recent analysis of the 2017 American Community Survey, more than 400,000 immigrants are working in creative or artistic occupations, helping support the nearly $1 trillion creative industry sector in the United States. There are more than 25,000 immigrant actors, producers, and directors; nearly 23,000 immigrant musicians; more than 17,400 immigrant photographers; and more than 16,000 immigrant writers and authors nationwide.

Tickets for individual events are $25-45. A limited number of all-access day passes are available for $125. Interested attendees can get tickets to the New American Festival at www.newamericanfestival.com.

Related: Check out our Online & Mobile Services to help your business on Harlem World Partners here.

New American Economy (NAE) is a bipartisan organization founded to educate, empower and support policymakers, influencers, and citizens across the country that see the economic and social benefits of a smart approach to immigration reform. NAE has created a coalition of civic, business, and cultural leaders who span the political spectrum and represent all 50 states. NAE makes the case for smart immigration reform in four ways: 1) we use powerful research to demonstrate how immigration impacts our economy, 2) we organize champions at the grassroots and influencer levels to build support for immigration, 3) we partner with state and local leaders to advocate for policies that recognize the value immigrants add locally, and 4) we show immigrant contributions to American culture through film, food, art, sports, comedy, and more.

NeueHouse is the home of the new – new ideas, people, conversations and experiences – where creators, artists and entrepreneurs come together to push culture forward. The NeueHouse creative system sits at the intersection of culture and commerce – underpinned by the unique confluence of elevated design-driven spaces, thought-provoking cultural programming and experiences, and unparalleled hospitality and creative resources. These all combine to inspire a creative and curious mindset, foster new connections and provide the stage for cultural experiences. NeueHouse membership currently comprises a prominent community of creators across locations in New York and Los Angeles.