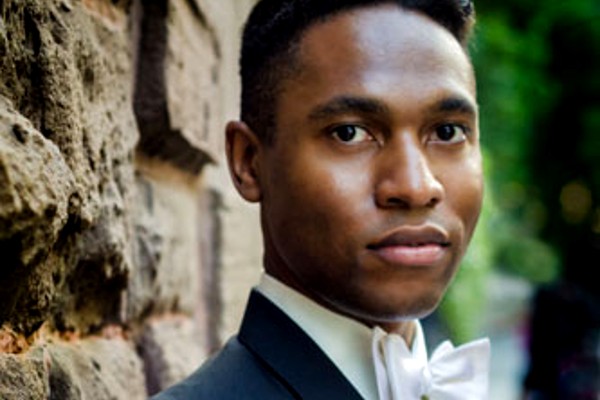 Hailed as “one of the great amateur choruses of our time (New York Today) for its “full-bodied sound and suppleness (The New York Times),” The Dessoff Choirs continues its season celebrating African American composer Margaret Bonds (1913-1972).

We are thrilled to cast a spotlight on Margaret Bonds’s neglected, but important contribution to the American music canon. She is a forgotten voice for civil rights that must be remembered, appreciated, and cherished. It seems the time has come for Bonds’s voice to be heard!”

The evening begins with Dr. Rollo Dilworth’s edition of Credo (1965-67), a seven-movement choral symphony for full orchestra, chorus and soloists. Portions of the work were performed in 1972, just four weeks after the composer’s untimely death.

In the mid-1960s, Bonds focused her attention on the writings of civil rights activist and sociologist W.E.B. Du Bois.

Du Bois’s essay Credo (1904) so inspired Bonds that she immediately began to compose her cantata on its text. So begins the prose: “I believe in God who made of one blood all races that dwell.” Dedicated to the memories of the poet Langston Hughes and singer-actress Abbie Mitchell, the text promotes unity and social equality which Bonds expertly portrays with rich harmonies and exciting motifs.

Credo shares the program with Bonds’s Easter cantata, Simon Bore the Cross (edition by Malcolm J. Merriweather), with text by her long-time collaborator Langston Hughes, based on the spiritual “He Never Said a Mumblin’ Word.” Bonds met Hughes in 1936, and a lifelong friendship ensued.

They collaborated on numerous projects both using the arts to build pride and excitement in African American heritage, community, and identity.

In much of their work, they place Black characters at the center of the action including Simon Bore the Cross pulling out an African biblical motif: Simon of Cyrene, from North Africa, figures in the Gnostic Gospels as a man who carried Jesus’s cross on the way to Calvary.

Simon Bore the Cross was thought to be lost until a complete piano-vocal score was found at a book fair in a dumpster, waiting to be thrown out.

This concert marks the latest in Dessoff’s ongoing exploration of Bonds’s important work. In 2019, Dessoff released The Ballad of the Brown King (ArkivMusic/Avie) to much acclaim. According to WQXR Radio it was one the Best Classical Recordings of the year.

“Nearly 60 years after its premiere, conductor Malcolm J. Merriweather and the phenomenal New York-based Dessoff Choirs have at last provided a way to experience Margaret Bonds’ genius cantata, The Ballad of the Brown King.”

Dessoff performed Bonds’s Ballad in December 2021 at The Metropolitan Museum of Art. As Dessoff did with Ballad, Dessoff will produce premiere recordings of both Credo and Simon Bore the Cross, making this music accessible to audiences everywhere.

The Dessoff Choirs, one of the leading choruses in New York City, is an independent chorus with an established reputation for pioneering performances of choral works from the Renaissance era through the 21st century.

Since its founding in 1924, Dessoff’s concerts, professional collaborations, community outreach, and educational initiatives are dedicated to stimulating public interest in and appreciation of choral music as an art form that enhances the culture and life of our times.

With repertoire ranging over a wide variety of eras and styles, Dessoff’s musical acumen and flexibility has been recognized with invitations from major orchestras for oratorios and orchestral works.

Past performances include Britten’s War Requiem and Mahler’s Symphony No. 8 with Lorin Maazel in his final performances as Music Director with the New York Philharmonic.

Over the course of its nearly 100-year history, Dessoff has presented many world premieres, including works by Virgil Thomson, George Perle, Paul Moravec, and Ricky Ian Gordon; the first American performance in nearly 100 years of Montemezzi’s opera La Nave with Teatro Grattacielo; and the American premieres of Philip Glass’s Symphony No. 5 and Sir John Tavener’s all-night vigil, The Veil of the Temple.

Dessoff’s recent discography includes REFLECTIONS, featuring music by Convery, Corigliano, Moravec, and Rorem; GLORIES ON GLORIES, a collection of American song featuring composers from Billings to Ives; and MARGARET BONDS: THE BALLAD OFTHE BROWN KING AND SELECTED SONGS, a debut recording of Margaret Bonds’s crowning achievement, which was cited as a “Best Classical Recording of 2019” by WQXR-FM Radio.

Conductor Malcolm J. Merriweather is Music Director of The Dessoff Choirs, founded in 1924, and known for pathbreaking performances of choral works from the pre-Baroque era through the 21st century.

Merriweatherenjoys a versatile career with performances ranging from the songs of Margaret Bonds to gems of the symphonic choral repertoire.

The baritone can be heard on the GRAMMY-nominated recording of Paul Moravec’s Sanctuary Road (NAXOS). Hailed by Opera News as “moving…expertly interpreted,” Margaret Bonds: The Ballad of the Brown King & Selected Songs (AVIE) has earned considerable praise around the world.

An Associate Professor, he is Director of Choral Studies and Voice Department Coordinator at Brooklyn College of the City University of New York, and the Artistic Director of “Voices of Haiti,” a 60-member children’s choir in Port-au-Prince, Haiti, operated by the Andrea Bocelli Foundation.

Merriweather is excited to resume in-person rehearsals and concerts. Highlights of his 2021-2022 season include the world premiere performance and recording of Credo and Simon Bore the Cross by Margaret Bonds; a performance at the Metropolitan Museum of Art of Margaret Bonds’s Ballad of the Brown King; and performances with Syracuse Opera, North Carolina Opera, and the Columbus Symphony Orchestra.

During the pandemic, Merriweather’s 2020-2021 season has been enriched with guest lectures and virtual appearances around the world, most notably at Yale University and Columbia University in Harlem. He has inaugurated a series of virtual events entitled “Dessoff Dialogues.”

These conversations emphasize matters of social justice, equity, and inclusion as they relate to classical music and choral art.

He was engaged by the Columbus Symphony Orchestra for Paul Moravec’s Sanctuary Road, and at the Eastman School of Music for the American Choral Directors Association Eastern Division Conference in Benjamin Britten’s War Requiem.

Merriweather holds a Doctor of Musical Arts degree in Conducting from the studio of Kent Tritle at the Manhattan School of Music, where his doctoral dissertation “Now I walk in Beauty, Gregg Smith: A Biography and Complete Works Catalog” constituted the first complete works list for the composer and conductor.

His professional affiliations include membership in Pi Kappa Lambda, the American Choral Directors Association, and Chorus America. Connect with him on Twitter and Instagram @maestroweather.