Harlem’s Leslie Uggams, Lynn Whitfield And Others Are Blue At The Apollo Theater 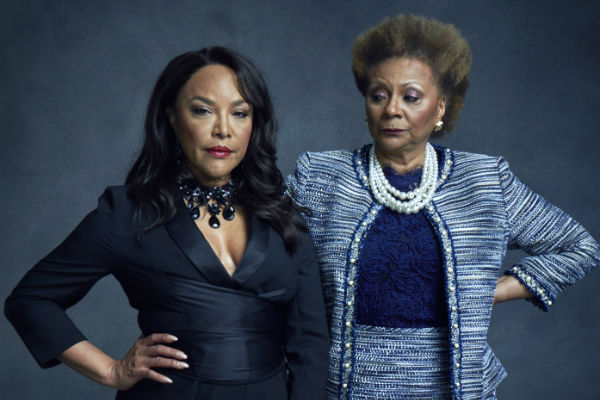 Rashad starred in both the play’s 2000 world premiere at Arena Stage and 2001 New York premiere at Roundabout Theatre Company. Music for Blue is by Nona Hendryx

with lyrics by Randolph-Wright and Hendryx.

With fierce wit and astonishing honesty, Blue explores the complexities of identity and trust behind the carefully constructed façade of the Clarks, a socially prominent family that is struggling with the legacy and pitfalls of their own good fortune. Infused with a searing jazz and soul score, Blue celebrates the love and spirit of a family coming to terms with itself.

Leslie Uggams (Tillie Clark) is a Tony and Emmy Award-winning actress who made her first professional appearance at the age of 9 at the Apollo Theater where she opened for such musical legends as Louis Armstrong, Ella Fitzgerald, and Dinah Washington. She then went on to Broadway (Tony Award for Hallelujah, Baby!) to the big screen (Deadpool, Skyjacked) and to television (“Empire,” “The Leslie Uggams Show”). She is perhaps best known for her stirring performance in the landmark television miniseries Alex Haley’s “Roots” (Critics Choice Award, Emmy, and Golden Globe nominations). Other Broadway roles have included starring in Blues in the Night, Her First Roman with Richard Kiley, Jerry’s Girls, Anything Goes (Lincoln Center Theatre), Thoroughly Modern Millie, King Headley II with Brian Stokes Mitchell, and On Golden Pond opposite James Earl Jones. Regional credits include A Little Night Music; The Rink; Into the Woods; Master Class; Call Me Madam; and Hello, Dolly! She also toured nationally with her autobiographical one-woman musical Uptown/Downtown.

(Peggy Clark) is an Emmy Award winner and current star of Oprah Winfrey Network’s “Greenleaf”, where she plays Lady Mae. She is also currently seen opposite Sanaa Latham in the Netflix movie Nappily Ever After. Whitfield has had recurring roles in the hit series “How to Get Away with Murder,” “Mistresses,” and on the cable drama “Hit the Floor.” It was on series like “Cagney and Lacey,” “Miami Vice,” and “Hill Street Blues” where television audiences first saw Whitfield. Other films include: Eve’s Bayou and A Thin Line Between Love and Hate (with Regina King and Martin Lawrence). She has starred in numerous television movies and miniseries including “Sophie and the Moonhanger,” “The George McKenna Story” (opposite Denzel Washington), “The Women of Brewster Place” (alongside Oprah Winfrey) and “The Josephine Baker Story” for which she received an Emmy Award for Outstanding Lead Actress as well as an NAACP Image Award. Off-Broadway, Whitfield starred in The Vagina Monologues.

Gabriel Brown (Adult Reuben Clark) is an actor originally from Durham, North Carolina trained at the prestigious University of North Carolina School of the Arts. Following graduation, he moved to New York, where he has worked extensively on stage and screen. He has had the fortune of being directed by Tony winner and Emmy nominee Phylicia Rashad in productions of both A Raisin in the Sun and Joe Turner’s Come and Gone where he was awarded an Los Angeles Stage Alliance Ovation Award for his performance. He has made several Off-Broadway appearances including Bathsheba Doran’s The Mystery of Love and Sex at the Lincoln Center, starring Diane Lane and Tony Shalhoub, directed by Tony Award winner Sam Gold, the lead in the late Pulitzer Prize nominee A.R. Gurney’s final full length play Love and Money, as well as appearing in Bobbie Clearly at the Roundabout Theatre Company. His television credits include appearances on “Madame Secretary,” “I’m Dying Up Here,” and in 2017 he was cast as the lead in the Issa Rae

Chauncey Chestnut (Young Reuben Clark) is a Washington, D.C. resident and a sixth grader at Capitol Hill Montessori in the D.C. Public School System. At the age of four, Chestnut, showed great interest in entertainment. He often controlled the television remote in the family room watching networks like Disney and Nickelodeon channels and would practice scripting and performing his own television commercials. He expressed an interest in having his own television show because he was sure he was as funnier than the kids he’d seen on television. In 2012, Chauncey was afforded an opportunity to audition for Linda Townsend Management, a talent manager in the Washington, D.C. metro and his career soon took off on a regional level. In 2019, Chauncey was thrilled to fly to Neverland in his stage performance role as Michael Darling in the world premiere of Peter Pan & Wendy written by Laura Gunderson and directed by Alan Paul. Chauncey has also appeared in television commercials, the Hulu miniseries, “Wu-Tang,” Off-Broadway plays, dance productions, and he has experience modeling. He is a triple threat and seeks to continue to develop skills through performing arts training at Divine Dance Institute in Capitol Heights, Maryland and through classes with Linda Townsend, his talent manager.

(Sam Clark Jr.). Broadway: A Free Man of Color at Lincoln Center Theatre. Off-Broadway: Curse of The Starving Class at Signature Theatre. Television: “Prodigal Sun” (recurring), “Blacklist,” “The Night Of,” “Law & Order: SVU,” “Orange is the New Black,” “Chicago PD,” “Betty,” and “FBI.” Regional: Troy Maxson in the McCarter Theatre/Long Wharf Theatre co-production of Fences, directed by Phylicia Rashad; King Henry, The Lion In Winter at Pioneer Theatre; John Proctor inThe Crucible at Cleveland Playhouse; Antony in Antony And Cleopatra at McCarter; Marc Antony in Julius Caesar at Orlando Shakespeare; One Night In Miami at Baltimore CenterStage; Othello in Othello and The Fall Of Heaven at Cincinnati Playhouse; A Midsummer Night’s Dream at Hartford Stage; Trojan Women and To Kill A Mockingbird at Alabama Shakespeare Festival.

(Sam Clark III) is the star of the CBS hit drama series “God Friended Me,” executive produced by Greg Berlanti, which was awarded the Humanitas Prize for Television and is now in production on a second season. It is the reigning most-watched Sunday night scripted program. Hall can also currently be seen recurring on the final season of the hit show “Power” for Starz. Previously, Brandon starred as the title role in the ABC half-hour comedy “The Mayor” from executive producers Daveed Diggs, Jeremy Bronson, and Jamie Tarses, which earned him a spot in Variety’s “Top Ten Television Stars to Watch” and People Magazine’s“ Ones to Watch.” His breakout performance came in the critically acclaimed TBS series “Search Party,” created by Michael Showalter and Lily Burns where he co-stars with Alia Shawkat, which he will return to in the upcoming third season. While still a student at Juilliard, Hall landed the lead of the CBS pilot “Life,” opposite Melissa Leo. Hall has made memorable turns on the Comedy Central series “Broad City,” Netflix’s “The Characters” (opposite Paul Downs), and A&E’s “Unforgettable.” On the feature side, he was most recently seen in Monster Party for Automatik and Lez Bomb which premiered at the Bentonville Film Festival and played in competition at NewFest in New York City. On stage, he starred in the world premiere production of Transfers, under the direction of Jackson Gay, at New York Stage & Film. Hall trained at the Juilliard Drama Division, the British American Drama Academy, and the South Carolina Governor School of the Arts and Humanities.

Alicia Stith (LaTonya Dinkins) is an actor born and raised in Baltimore, Maryland. She is a recent graduate of the drama program at New York University’s Tisch School of the Arts. This is her professional acting debut.