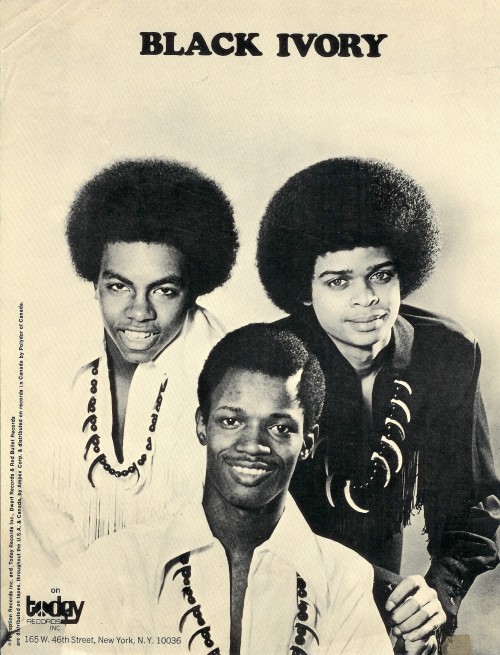 Black Ivory is an R&B group from Harlem, which had a number of hits in the 1970s, including “Don’t Turn Around

“, “You and I” (which featured Larry Blackmon from Cameo on drums).

Some of the other hits include “I’ll Find a Way (The Loneliest Man in Town)”, “Spinning Around”, “What Goes Around (Comes Around)”, “Will We Ever Come Together

The group features songwriter and prolific disco producer Leroy Burgess, Stuart Bascombe, and Russell Patterson. They were managed by Patrick Adams, an executive at the Today/Perception record company. Burgess was the lead voice of the majority of their hits in the early 1970s. With Today/Perception being a small label, the promotion of Black Ivory’s singles scarcely got beyond the East Coast. This lack of exposure, coupled with the rise of disco and the fact Adams was beginning to branch out into other projects, caused Black Ivory to lose steam.

Early in their career, Black Ivory’s songs were covered by other artists on Today/Perception, a common practice with the label. Label-mates J.J. Barnes, The Eight Minutes, Debbie Taylor, and Lucky Peterson all covered Black Ivory tunes.

The group recorded several uptempo songs in the disco vein, such as “Big Apple Rock,” “Walking Downtown (On A Saturday Night)”, “What Goes Around (Comes Around),” “Don’t Turn Around Live

,” and, later, “Mainline” but, not being known for the style, they were unable to compete when disco became the dominant music style. While he was with Black Ivory, Burgess frequently collaborated with Adams in writing songs. He also wrote the groups’ hit, “Mainline,” which featured Russell Patterson on lead and was recorded while he was on hiatus from the group.

In the last few years, the group has returned to the stage on the Oldies circuit, featuring all three original members, with Stuart Bascombe doing most of the leads. In December 2011, they released a new CD called Continuum.

In recent years, some of Black Ivory’s work has been sampled by a number of artists. Raekwon sampled “I Keep Asking You Questions

” for his song Criminology on his acclaimed 1995 album, Only Built 4 Cuban Linx. In 2000, Barbara Tucker reached number one on the Billboard dance chart with here single, “Stop Playing with My Mind”, which sampled “Mainline.” In 2005, Omarion sampled “Don’t Turn Around” on the remix of his song “I’m Gonna Try (Pt. 2)”. 9th Wonder sampled “Love Won’t You Stay” on Kaze’s “For The Record

” on his track “Love On Display”. Brand Nubian also sampled the introduction from “Wishful Thinking” for their song “Where are you now?”. In his 2006 Beat Konducta Vol.1-2: Movie Scenes, Madlib sampled “You and I” in his beat titled “The Understanding (Comprehension)”. Later on, in 2008; Q-Tip also sampled “You and I” for his single “Gettin Up”. In 2012, Lil B sampled “Surrender” for his track “Surrender To Me” on the White Flame mixtape.

In addition, poet Wanda Robinson, on her album Black Ivory, used the instrumental track of “Don’t Turn Around” as the background for her poem “The Final Hour” and “I Keep Asking You Questions” for her poem “Instant Replay.” Robinson was Black Ivory’s label mate at Today/Perception.