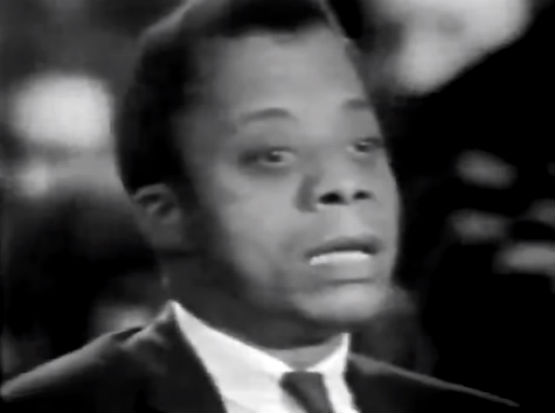 Harlem’s James Baldwin delivers an earth-shattering speech with Harlem as his starting point in talking about all black folks at Cambridge University during a debate with William F. Buckley in 1965.

When you ride out of Harlem:

If you walk out of Harlem, ride out of Harlem, downtown, the world agrees what you see is much bigger, cleaner, whiter, richer, safer than where you are. They collect the garbage. People obviously can pay their life insurance. Their children look happy, safe. You’re not. And you go back home, and it would seem that, of course, that it’s an act of God that this is true! That you belong where white people have put you.

In the Harlem barbershop:

I remember, for example, when the ex Attorney General, Mr. Robert Kennedy, said that it was conceivable that in forty years, in America, we might have a Negro president. That sounded like a very emancipated statement, I suppose, to white people. They were not in Harlem when this statement was first heard. And they’re not here, and possibly will never hear the laughter and the bitterness, and the scorn with which this statement was greeted. From the point of view of the man in the Harlem barber shop, Bobby Kennedy only got here yesterday, and he’s already on his way to the presidency. We’ve been here for four hundred years and now he tells us that maybe in forty years, if you’re good, we may let you become president.