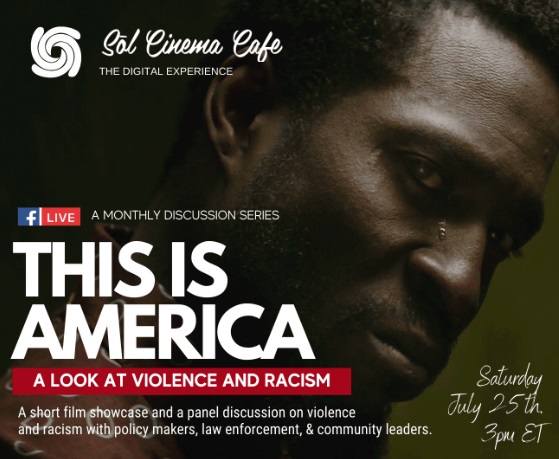 The Facebook Live event will take place Saturday, July 25th, 2020 at 3PM EST and be the first edition of a monthly discussion series that takes a close look at America from different perspectives and moderated by ImageNation Founder, Moikgantsi Kgama. The recent George Floyd national uprisings greatly influenced the topic of the first event. THIS IS AMERICA: A LOOK AT VIOLENCE AND RACISM will be a multi-city discussion on violence and racism in America with policy makers, law enforcement, community leaders from across the country and a film component. The 3 initial cities selected are New York City, Chicago and Indianapolis with many additional other cities across America participating. The event will be streamed on Facebook Live and accessible to all 3.5 billion Facebook Live broadcast viewers. People can view the event by going to https://www.facebook.com/SolCinemaCafe/live and will be encouraged to join the conversation by leaving questions and comments in real time via the facebook portal.

A segment of the film, Breathe, will play during the July 25th discussion and the entire film along with other related films will be available anytime on the Sol Cinema Cafe online platform.  Breathe was made by filmmakers Darye and Dija Henry. The married couple are a central Indiana family rocked by gun violence with the hopes their message in a movie will help other families experiencing the same heartache and cope with their own grief and pain of losing a loved-one to gun violence.

This is America films on the Sol Cinema Cafe online platform include:

ImageNation is led by Moikgantsi Kgama (Founder & Executive Director) and Gregory Gates (Executive Producer). The Harlem-based media arts group, founded with the goal of establishing a chain of art-house cinemas, dedicated to progressive media by and about people of color (Sol Cinema Cafe). Through a variety of exhibitions and programs, ImageNation edifies its audience. We foster media equity, media literacy, solidarity, cross-cultural exchange and highlight the humanity of Pan-African people worldwide. ImageNation has presented internationally in South Africa, Scotland and Canada and domestically at Harvard University, MASS MOCA, Columbia University and in Dallas, TX, Los Angeles, CA, Baltimore, MD and Washington DC. Programs have featured appearances by leading filmmakers such as Spike Lee, Lee Daniels, Stanley Nelson and Ava Duvernayto name a few.