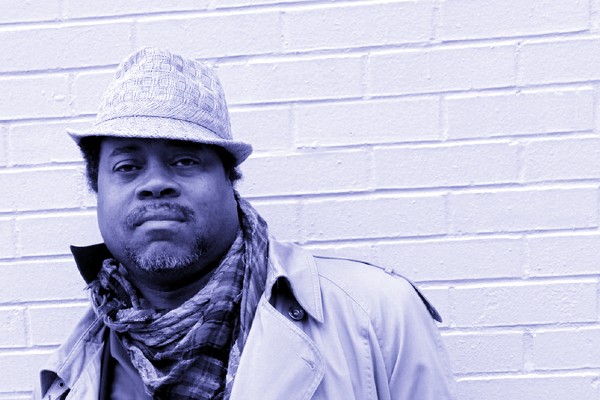 Greg Tate’s Burnt Sugar The Arkestra Chamber are celebrating over two decades of intrepid musical exploration with the release of Angels Over Oakanda. Angels Over Oakanda is a four-song suite that is the group’s first new studio-generated album of original material since 2017’s All You Zombies Dig The Luminosity. The album is being released on CD and as a digital download by Avant Groidd Musica this year with a 12” vinyl release to follow in 2022.

In the meanwhile listen here.

Angels Over Oakanda is a unique body of compositions that draws upon the high bar of creativity and musicianship within the ensemble in unprecedented ways.

The opening track, which gives the album its name, was recorded in Brooklyn with a full complement of the current gigging and touring Burnt Sugar instrumental band.

Activating a 140 bpm groove-loop by Tate for its rhythmic and ‘ill-bient’ foundation, the group launches on a dizzying 18-minute journey of extemporaneous conjuration — one directed and disciplined under Tate’s baton by the seasoned deployment of their late sensei Lawrence Butch Morris’ Conduction System for Ensemble, practicing what Ornette Coleman called ‘The Art of the Improvisors.’

Next on this EP is a 12-minute Beat-and-Bass remix variation of the Oakanda suite entitled ‘Repatriation of the Midnight Moors’, produced, composed, and arranged by longtime Burnt Sugar guest drummer and arrangement collaborator, Marque Gilmore tha’ Inna•Most. ‘Repatriation’ is remix #2 extracted from a 5-track, 41-minute ReMiX MiXTaPe Suite of its own.

Gilmore has a relationship with several Burnt Sugar members that goes back to his formative years as a founder-member of the Black Rock Coalition in 80s and 90s Gotham. Brother Gilmore drew on discrete musical elements and thematic impulses of Angel’s long-form version to create a wholly original work — one which distills the artist’s deep history in Cambridge, as a teen in his father Marvin Gilmore’s reggae-centric club The Western Front, then later in New York with the BRC-massive, his 14-year stint in London being a pioneering member of its Black Poetic and Drum’n’Bass communities from the mid- 90s (alongside such now well-known UK literary pillars as Roger Robinson and Malaika B), along with his journeyman tenure with Joe Zawinul in the post-millennial oughts, through to his decade of contributions to the touring ensemble and Grammy nominations for his production work with Cuban pianist Omar Sosa.

‘Repatriations’ Gilmore has this to say: I am truly humbled and honored each and every time I am invited as a guest artist with Burnt Sugar, and even with my Acousti-Lectric drum-arrangement infusions, I have YET to hold that Dang-Blessed BATON! So, I created a full-length remix suite entitled: “The Reconstru-Ducted Repatriation Road-Rage ReMiXeS” – Based on my Live-Remix production style (preserving an artist’s live performances and ensemble instrumentation), I basically re-conducted the entire Oakanda affair digitally and created the beat-structures and harmonic production utilizing the combined sciences of Archeo-Astronomy and ancient Sumerian time-keeping (hence, the 12-minute remix of ‘Midnight Moors’) connected to Vibez on the long road ahead in The Struggle with contemporary BLM-based activist thought in the titles and text.

Smith, a co-founder of The Family Stand, is also a co-composer of their international hit ‘Ghetto Heaven’; and is known for his tenor playing on all of Billy Ocean’s Eighties hits including the Grammy-award-winning-number-one-Billboard-charting-classic ‘Caribbean Queen’, which also shows up frequently on lists giving love to the greatest sax solos in pop music history.

The suite’s finalé, ‘Lisala Over inna-Oakanda’ is a collaboration between longtime Burnt Sugar vocalist Lisala Beatty, (described by V. Jeffrey Smith as ‘’the last of the real red hot soul singers’’) and Greg Tate, who generated the lyrics. Lisala was given the bulk of the Oakanda recordings and rough mixes to vibe with and chose to snag the first 3-minutes of Gilmore’s ‘Repatriation’ to flex Tate’s lyrics over. Subsequently, Gilmore adapted the instrumental arrangement to support Lisala’s heavenly vocal flow while also, at Tate’s most-welcomed rhythmic request, created an alternate version with additional Drumz that comprises the advance-release single.

About his lyrics Tate says, ‘’The verses pay an abstract homage to the ghost-lineage of American born Black radical artists and activists — from those of the transatlantic trafficked who sustained their humanity and mind, body soul throughout that 90-day ‘’Auschwitz on the water’’ (per Arthur Jafa) horror-show, to the Maroon communities of Black and Indigenous freedom fighters of Florida who created free nation-states in fugitivity, fighting off the US Army for 30 years (at the height of chattel slavery, and beyond), to the 60’s modern warrior formations of the Freedom Riders, The Black Panther Party, Black Liberation Army, The Black Arts Movement (led by Amiri Baraka), and the Republic of New Africa who helped free Assata Shakur.

Lisala took Tate’s stark lines and gave them a buoyant melodicism, at once “anthemic, aspirational, spiritual, operatic, and Afro-Angelical.’’

FYI: There will be a second and third release of remixes and extrapolative extensions of Angels Over Oakanda by Burnt Sugar on the horizon…