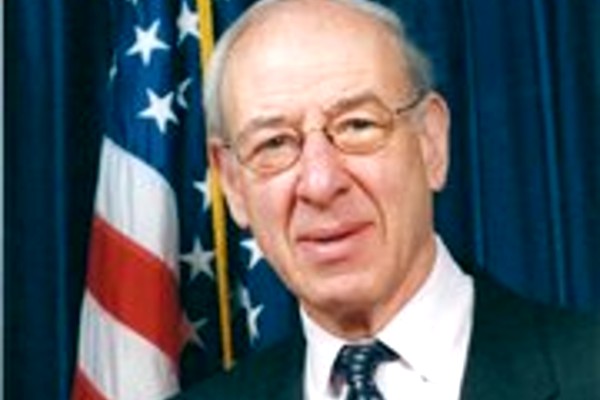 Leichter was born in Vienna, Austria. He came to the United States as a refugee from German-occupied Europe in 1940 with his father and brother.

According to an August 19, 2020 article posted on the American Friends of the Documentation Center of Austrian Resistance, when “the German Wehrmacht overran France in May 1940,” Leichter, his father and his brother “fled Paris;” and “after some weeks in Montauban, they left France with a forged exit certificate, traveled across Spain to Lisbon, and took a Greek steamer to the United States,” where “Muriel Gardiner, one of the greatest rescuers of Austrian refugees in the US, helped the two sons gain admission to a boarding school in Connecticut.”

His mother Käthe Leichter (1895–1942) was a leading sociologist and feminist. She was arrested by the Gestapo in 1938, sent to the Ravensbrück concentration camp, and killed in 1942.

The Government of Austria has conferred an annual Käthe Leichter Award in her honor since 1992.

Franz S. Leichter, a Democrat, was first elected to the New York State Assembly in November 1968. He remained in the Assembly until 1974, sitting in the 178th, 179th, and 180th New York State Legislatures.

He drafted a bill expanding abortion rights together with Republican Assemblywoman Constance Cook of upstate Tompkins County, New York, proposing legislation that included no restrictions on the practice of abortion.

The bill passed in the Senate on March 18, 1970, after five hours of debate by a vote of 31–26. For the Assembly, the bill was amended to allow for women to have abortions until their 24th week of pregnancy or at any time to protect the life of the mother.

The Cook-Leichter bill was the first in the nation to legalize abortion. This law influenced the U.S. Supreme Court ruling in its landmark January 1973 Roe v. Wade decision.

Leichter won election to the State Senate in 1974 after he defeated incumbent Senate Minority Leader Joseph Zaretzki in the Democratic primary.

In the Legislature, Leichter was known as a maverick who fought for reform and effective ethical standards.

For his outspoken criticism of how the Legislature operated, and his willingness to take on powerful interests such as New York City’s banking and real estate industries, and the leadership of the Democratic and Republican parties, he was often referred to as “the conscience of the Senate”.

Leichter took on many causes. He introduced the New York City canine waste law, commonly known as the “pooper-scooper” law, which requires dog owners in New York City to clean up after their pets. Since its enactment in 1979, similar laws have been adopted throughout the country.

Leichter was a strong consumer advocate. As ranking Democrat on the Senate Banking Committee, he sought to advance the interests of consumers and to block harmful legislation.

Among his major achievements was the law that required banks to promptly credit their customers with checks when deposited instead of holding the amounts for days while using the money for their own profit, the first such law in the country.

For many years he issued a popular Consumer’s Guide to Banks to help empower consumers with information on how to avoid excessive charges and hidden fees.

He also published a similar Consumer’s Guide to Credit Cards. He frequently called attention to hidden bank and credit card charges and other practices that were costly to consumers.

Active in support of affordable housing, Leichter pushed the Legislature to pass the “warranty of habitability” to protect tenants from dangerous and unsanitary conditions.

Related:  Not In Harlem, But Second And Third Person Under Investigation For Novel Coronavirus

He was a leading advocate for tenants’ rights and a vocal supporter of New York’s rent regulations to protect affordable housing.

Leichter was a major proponent of establishing parks and green space to provide community access to the Hudson River waterfront, both within New York City and in the Hudson valley.

He co-authored with Assemblyman Richard Gottfried legislation that created Manhattan’s Hudson River Park and led the effort that established Riverbank State Park in Harlem where he lived 250 West 104th Street, in Harlem.

He co-authored with Assemblyman Richard Gottfried legislation that created Manhattan’s Hudson River Park and led the effort that established Riverbank State Park in Harlem where he lived 250 West 104th Street, In Harlem. The Hudson River Park now stretches from Battery Park City to 59th Street along the Hudson River.

The park has replaced rotting piers and a derelict waterfront with acres of greenery, with areas for both quiet space and active recreational use that has brought thousands of New Yorkers and visitors back to the waterfront.

The Riverbank State Park, which was built at Leichter’s urging on top of a wastewater treatment plant, stretches for ten blocks along Harlem’s shore of the Hudson River. Riverbank is visited annually by more than 3 million people and is the third most-used State park in New York.

The Riverbank State Park, which was built at Leichter’s urging on top of a wastewater treatment plant, stretches for ten blocks along Harlem’s shore of the Hudson River. Riverbank is visited annually by more than 3 million people and is the third most-used State park in New York.

In 1990, Leichter drafted and introduced the first state bill anywhere in the country providing for domestic partnerships, primarily to expand civil rights for lesbian and gay people in the absence of their right to marriage.

While his bill did not pass it helped move to the forefront of the effort to achieve equal rights for gays and lesbians. New York State adopted the same-sex marriage law in 2011.

As a Democrat serving in the minority party his entire legislative career, Leichter described his strategy as “raising issues”, which he accomplished through the aggressive debate on the Senate floor, extensive research reports, and frequent news conferences in the Senate lobby and on the steps of New York City Hall.

His districts covered portions of the western sides of Manhattan and the Bronx. His stands and independence resulted in the Democratic and Republican leadership twice reapportioning him so his home was outside his district. Both times he ran in newly structured districts to retain his seat.

Leichter announced his retirement from the Senate in 1998 at age 67 and was succeeded by Eric Schneiderman, who went on to be elected as New York State Attorney General in 2010.

In 2000 he was nominated by President Bill Clinton as a Director of the Federal Housing Finance Board (FHFB), which was the regulator of the Home Loan Bank System. Leichter began his service in August 2000 with a recess appointment from the President.

He was then re-nominated by President George W. Bush and confirmed by the Senate. Leichter served until July 2006 when his term expired.

Leichter was nominated in 2009 by Governor David Paterson to serve on New York State’s Banking Board. He was confirmed by the Senate and served as a member until its elimination in 2011.

Leichter was a practicing attorney for 50 years, specializing in commercial litigation and in representing foreign clients. Among others, he represented Brazilian and Mexican Banks.

He was associated with various law firms, including Wachtell Manheim & Grouf and until his service on the Federal Housing Finance Board with Walter Conston, Alexander & Green (now part of Alston & Bird).

Leichter appears in the 2012 film Here One Day, directed by daughter Kathy Leichter, about the 1995 suicide of Leichter’s wife and Kathy’s mother Nina.

Photo credit: Apologies for the quality of the image of Franz Sigmund Leichter.