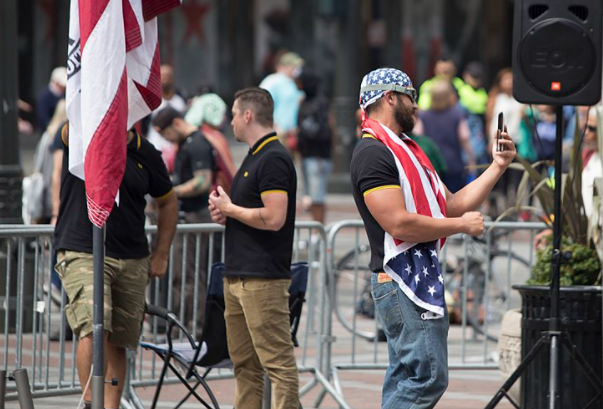 Today, Harlem Representative Adriano Espaillat and Representative Jesús G. “Chuy” García released the following statement regarding the introduction of their resolution in the House.

The resolution which expresses the Sense of Congress that the Proud Boys engaged in acts of domestic terrorism at the U.S. Capitol, urges the Department of Justice, state, and local law enforcement entities to recognize the threat posed by the Proud Boys and white supremacists and to intensify efforts to hold the Proud Boys accountable for their discriminatory and violent acts:

“The Proud Boys have a very clear brand: domestic terrorism, which was on full display at the United States Capitol on January 6th, prompting Canada, one of our nation’s closest allies to formally tag them as a terrorist organization. As detailed in press accounts and federal complaints against Proud Boy members, the group played a leading role in the insurrection on the Capitol, which led to the death of five people, including members of the United States Capitol Police force,” said Rep. Adriano Espaillat. “Given the violent, extremist ideology of the Proud Boys organization, which is arranged into chapters under one brand and a leadership structure, it is essential that the House formally express its belief that the Proud Boys have operated as domestic terrorists and pose an imminent insider threat to communities across the country and to our democracy.”

“Let me be clear—on January 6, the Proud Boys helped coordinate an act of domestic terrorism when they joined a violent mob that stormed the U.S. Capitol,” said Rep. Jesús G. “Chuy” García (IL-04). “The Proud Boys’ actions fit the FBI definition of domestic terrorism: they commit violent, criminal acts to promote their far-right ideology. It’s time to call them what they are and hold them accountable.”

“Members and leaders of the Proud Boys have repeatedly embraced and advanced antisemitic, racist, and violent rhetoric, and their role in helping to instigate and carry out the attempted insurrection of January 6 further reveals this event’s foundation in dangerous extremism. If our nation is to ever eliminate this kind of destructive hate, it is critical that Members of Congress unequivocally condemn the Proud Boys’ behavior in the clear and strong language that Reps. Espaillat and García have proposed,” said ADL CEO and National Director Jonathan Greenblatt.