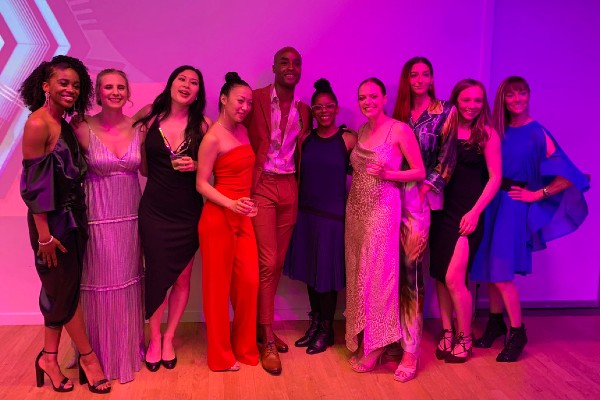 education, and collaboration, announced virtually a few nights ago.

This was during their 40th Anniversary Gala that effective immediately, they will assume a new name: Emerge125.

This rebranding is intended to pay homage to their Harlem home and commitment to inclusivity.

Founded in 1981, this is the third name change that the company has undergone and comes on the 5th anniversary of the succession of leadership from the company’s founder Elisa Monte to its current Artistic Director Tiffany-Rea Fisher.

Having held many positions in the company since becoming a member nearly twenty years ago, Fisher’s career timeline began center stage as a principal dancer and quickly moved into more integral roles of the company; developing the company’s educational outreach initiative, working to secure funding, and as a leader, working to shape the future voice of a company that continues to bridge cultural boundaries through dance.

Today this shift in brand identity celebrates the next era for the organization and ensures the company’s broader positioning and messaging is aligned with both the name and the spirit of the organization as it exists today.

Operating from dual homes in Harlem and Lake Placid, New York, while serving audiences both locally and around the world, their work over the last five years has and will continue to use movement as a catalyst for community building while expanding the reach, purpose, and impact of the art of dance.

“I am very grateful to lead a company that has always been at the forefront of the field, constantly evolving and changing while staying true to the mission,” reflects Fisher. “This is the third name change in our company’s history:  Elisa Monte Dance (1981) to Monte Brown Dance (1998), back to Elisa Monte Dance (2002) and now EMERGE125. We understand that what we are called should be representative of the work we do. I want this company to exist long after my tenure and for those who come after me to keep Harlem close to their hearts as well as the push to evolve.”

“This next chapter of EMD’s story is thrilling, exemplified by its new name EMERGE125, which is crafted to sustain the company in this next century,” adds Elisa Monte.  “It is a pleasure to see Tiffany fly with her own vision and to witness the company continue to grow in a new direction. I look forward to seeing it soar into its future.”

While the city and its burgeoning arts community rebuilds from the extensive COVID-19 closures, EMERGE125 is bringing their dancers back to the stage this season celebrating not only their own restart but a new era of possibility with several upcoming appearances:

In addition to announcing the company’s new identity, guests of the virtual gala were also treated to excerpts from Fisher’s new works Geography of Grace and Rights of Renaissance as well as their yet-to-be-released documentary.

In the spirit of collaboration, the evening also welcomed guest speakers Producing Artistic Director and Actor of the Classical Theatre of Harlem, Ty Jones, Executive Director of Lake Placid Center for the Arts, James Lemons, Artistic Director of The Flea Theater Nigel Smith, and presented a Service to the Field award to the Director of Programming at Harlem Stage, Monique Martin.

Founded in 1981, EMERGE125, formerly known as Elisa Monte Dance, is a hub for a dance performance, creation, and education.

The organization operates from two home bases in both Harlem and Lake Placid, New York, while serving audiences both locally and around the world.

Our rigorous dance education programs impact children, families, pre-professionals and professionals, and our movement and wellness programs engage multi-generational learners from the diverse communities we serve.

EMERGE125 has established itself as a leader in the field by using movement as a catalyst for community building while expanding the reach, purpose, and impact of the art of dance.

Before her career as a choreographer and starting her company in 1981, Elisa had the privilege of working with some of the most renowned choreographers of the last century.

A professional dancer from a young age, she first danced for Agnes DeMille in several stage and TV productions.

She went on to later dance with Lar Lubovitch, Pilobolus, and Martha Graham. It was Ms. Graham who ignited her choreographic career by commissioning her work Treading in 1979.