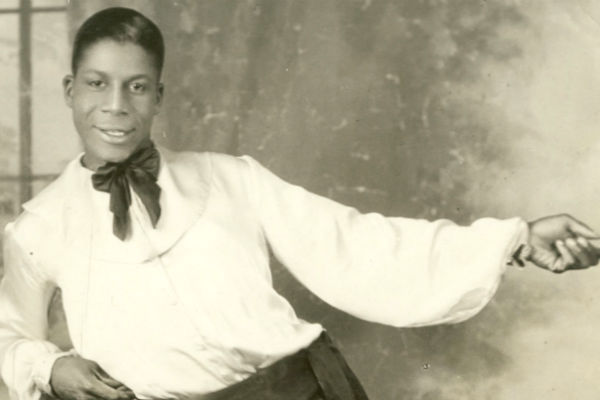 Earl “Snakehips” Tucker, 1905 – 1937, became known as the “Human Boa Constrictor” after the dance he popularized in Harlem in the 1920s called the “snakehips (Dance)“.

Tucker frequented Harlem music clubs and was a regular at the Savoy Ballroom. He built his reputation by exhibiting his odd style of dance, which involved a great deal of hip motion. The snakehips dates back to southern plantations before emancipation.

Tucker would make it appear that he was as flexible as a snake, and eventually, the dance became his calling card. He became popular enough to eventually perform at Connie’s Inn and the Cotton Club.

Riding this wave of popularity, in 1930 he appeared in Benny Rubin‘s 16-minute short film “Crazy House“, a comedic introduction to residents at the fictitious “Lame Brain Sanitarium”. Tucker’s 2-minute dance number, performed in a shiny white shirt and shiny, baggy gold pants, displays his amazing dance innovations, his style a precursor to modern street and stage dance. Interestingly, his name appears in the opening credits only as “Snake Hips”. Similar moves would later inspire an element of hip-hop culture known as breakdancing or even Michael Jackson’s “Moon Walk.”

Here’s a video of Mr. Snakehips:

In 1935, Tucker appeared in a short film called Symphony in Black: A Rhapsody of Negro Life. The film was based around a Duke Ellington composition and included clips of Ellington composing, as well as Billie Holiday singing and Tucker doing the snakehips.