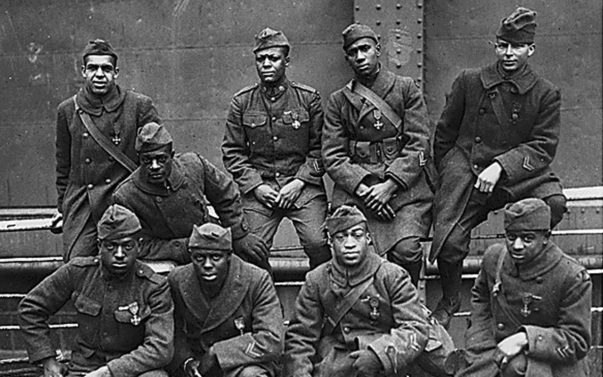 Dorrance Brooks, born 1918 -, an African American soldier who died in France shortly before the end of World War I. A native of Harlem and the son of a Civil War veteran, Brooks was a Private First Class in the 15th Infantry. In World War I, African American soldiers served in segregated regiments and were not eligible for aid from the Army Nurse Corps or the American Red Cross. In spite of these discouragements, Brooks distinguished himself as a faithful and patriotic soldier. Brooks was praised for his “signal bravery” in leading the remnants of his company after his superior officers were killed.

Dorrance Brooks Square was dedicated on June 14, 1925, more than 10,000 people were said to have attended the ceremony, presided over by Mayor John F. Hylan and Colonel William Hayward, commander of the 15th Infantry.  The New York Times reported that Dorrance Brooks Square was “the first public square to be named after a Negro soldier.” In October 1952, President Truman, who four years earlier had issued an executive order requiring “equality of treatment and opportunity” in the armed forces, addressed an audience of 50,000 from this small square to celebrate the desegregation of the services.

Dorrance Brooks was part of the 369th Infantry Regiment, which consisted of only African and Puerto Rican Americans, during both World Wars. He was a Private First Class at the time of his death. The 369th Infantry Regiment was nicknamed the “Hell Fighters” by the Germans due to their toughness in battle (Black Soldiers of New York State, 2009). Before the 369th Infantry Regiment was constituted, on June 2, 1913, African-American soldiers were typically sent to fill vacancies within the French armies. With the formation of this regiment, many African-Americans saw it as an opportunity to prove their capabilities, and alter the way that they were perceived by their white counterparts (Fighting for Respect: African American Soldiers in WWI, 2015).

Photo credit: Dorrance Brooks not pictured in an image of Harlem Hellfighters 369th Infantry from wikipedia. Via source