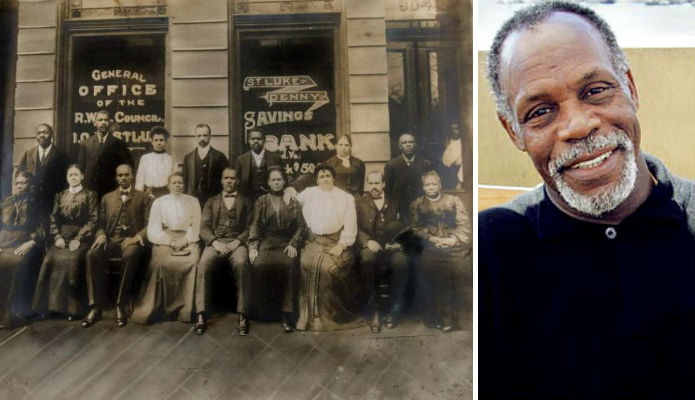 The African Diaspora International Film Festival will celebrate Black History Month with a selection of films about the multiple dimensions of Black History.

Highlighting the program is the East Coast Premiere presentation of The Robeson Effect, Juney Smith’s latest documentary that celebrates the life and accomplishments of actors and Harlem resident Danny Glover (pictured above) and Ben Guillory, co-founders of the Robey Theatre Company named in honor of pioneering actor, public speaker, and opera singer ‘Paul Robeson’. A red carpet and VIP reception will start at 7 pm on Friday, March 1 at the Cowin Center at Teachers College, Columbia University. The 8 pm screening will be followed by a Q&A with Mr. Smith and actors Danny Glover and Ben Guillory.

Another highlight is the East Coast Premiere screening of Boss: The Black Experience in Business. The little-known story of African American entrepreneurship from post enslavement and reconstruction to the present, where skill, industriousness, ingenuity and sheer courage in the face of overwhelming odds provide one of the backbones of this nation’s economic and social growth.

Directed by Peabody- and Emmy Award-winning filmmaker Stanley Nelson (Tell Them We Are Rising: The Story of Historically Black Colleges, The Black Panthers: Vanguard of the Revolution and Freedom Summer), Boss: The Black Experience in Business shines a light on the story of resilience and resistance within the black American experience in the face of overwhelming odds, including racial hostility and violence, economic exclusion, segregation, and discrimination.

Other films in the program include the epic drama Njinga, Queen of Angola by Sergio Graciano about the famous 17th century Queen who led her kingdom in a long struggle for independence. Barrow, Freedom Fighter by Marcia Weekes, tells the story of The Right Excellent Errol Walton Barrow who successfully led Barbados to independence on November 30th, 1966 after more than 300 years as a British colony. Barrow will screen with Catch a Fire by Menelik Shabbaz, the story of Deacon Paul Bogle, often described as the 19th century Malcolm X of Jamaica. Time and Judgment, also by Menelik Shabbaz, is an overview of the African Liberation Movement that spans a period of 400 hundred years andNasser’s Republic: The Making Of The Modern Egypt by Michal Goldman is the first film for an American audience about Gamal Abdel Nasser, a great pan Africanist, and transformative leader.

Celebrating leadership in the arts and politics are Jacques Roumain: Passion For A Country by Arnold Antonin, an exploration of Haitian society in the late 19th and early 20th centuries that focuses on the tormented life of one of Haiti’s most important authors and prominent political figures. Aleijadinho, Passion, Glory and Torment by Geraldo Santos Pereira is set in 19th century Brazil – at a time when slavery was still at the foundation of the Latin American economy. This fascinating historical drama is loosely based on the life of Afro-Brazilian sculptor Antonio Francisco Lisboa “Aleijadinho,” one of the greatest sculptors of Latin America.

ADIFF’s Black History Month Program will open on February 28, 2019, with a FREE screening of Tango Negro: The African Roots of Tango by Dom Pedro, a revealing historical and musical documentary that celebrates the contribution of Africa to the development of the Tango.

The African Diaspora International Film Festival BLACK HISTORY MONTH PROGRAM is made possible thanks to the support of the following institutions and individuals: ArtMattan Productions; the Office of the Vice President for Diversity and Community Affairs, Teachers College, Columbia University; the New York City Council in the Arts; and WBAI.