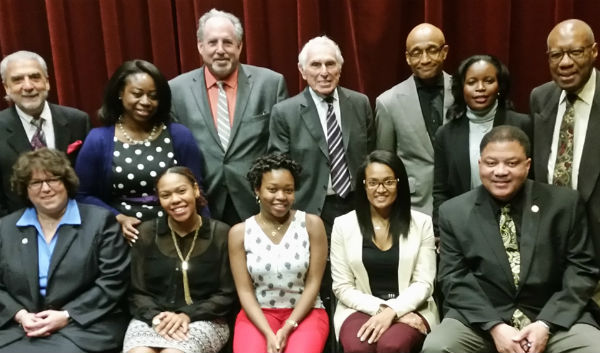 Last night, Harlem’s Community Board 10 voted to “disapprove the Olnick Rezoning Plan” that would substantially rezone the Lenox Terrace neighborhood and allow for the construction of luxury towers and overscale retail stores. The rezoning application, filed by the Olnick Organization, is opposed by the Lenox Terrace Association of Concerned Tenants (LT-ACT).

The CB10 vote was 20-15 against the proposed rezoning, voting “No, With Conditions.” The “conditions” laid out CB10’s reasons for their “No” vote to the rezoning and added conditions for any future development on the property which included protections for the tenants of Lenox Terrace and the Central Harlem community. Many of the Community Board members who voted against the resolution wanted a clean “No” vote without conditions.

“I am an enthusiastic supporter of smart, better-planned urban development, but this proposal is a neighborhood-altering mega-structure,” said Lenn Shebar, president of LT-ACT. “The scale of the plan illustrates the dehumanizing forces of commerce-minded urban planning. Olnick’s profit driven proposal was never about enhancing the property for the benefit of the existing residents or addressing their maintenance and security concerns, but more about creating a new community for people who have yet to live here at the expense of those who currently reside here.”

The Lenox Terrace site has enormous cultural and historical significance as a center of African-American culture in Harlem and is eligible for registration on the state and national historic registries. The current residential zoning (R7-2) already allows for additional housing to be built within the existing complex and also has commercial overlay zoning (C1-4) on its perimeter, allowing for small-scale retail and restaurants on three sides of the complex.

The Olnick Organization’s application asked the City to rezone Lenox Terrace from the current residential zoning to a C6-2 designation, which is “normally found in the central business district and regional commercial centers,” according to the City’s Zoning Resolution. If passed, the rezoning would unleash the development of “destination retail” stores, like Target or Walmart, for the first time in the neighborhood, while also allowing five new 28-story towers in Lenox Terrace, more than doubling the density within the complex. The Community Board’s resolution rejected the rezoning, finding it “not consistent with the present and future needs of the community.”

“You don’t see places like Target in the pretty renderings that the developer gave the City but that’s the end goal of this commercial upzoning,” said Daniel Carpenter-Gold, a staff attorney at TakeRoot Justice, which represents LT-ACT. “Community Board 10 did the right thing in putting the needs of Lenox Terrace and Central Harlem residents ahead of profiteers like Olnick.”

The resolution cites the class-action lawsuit by current Lenox Terrace tenants against Olnick for illegally taking units out of rent stabilization while claiming a J-51 tax abatement for affordable housing, along with “significant health hazards” created by Olnick’s failure to maintain the existing apartments. Residents have reported lead contamination in their drinking water and asbestos-vinyl tile flooring in the basements, laundry rooms, and many apartments. Due to cracks and breaks in the tile, the tiles are now “friable,” creating a health risk to residents. The Community Board found that Olnick’s behavior “has resulted in high levels of mistrust of Olnick among residents and the community at large” and “question[ed] Olnick’s overall integrity for any project.”

The Community Board also raised the alarm about the “serious negative impact” the seven-to-ten years of proposed construction would have on people with asthma or other respiratory diseases in the area, noting that Central Harlem already has high levels of harmful air pollution.

The resolution emphasizes Olnick’s failure to meet the “standards and expectations” for affordable housing that have been laid out by the Community Board, and that continued development of luxury housing would drive up property taxes and rents in the immediate neighborhood.

Finally, the Community Board explained that “any proposed development must protect and celebrate” the culture and history of Lenox Terrace. Such recognition must be “more than photographs, statutes or written information,” but “support the physical brick and mortar” of the development, including its iconic circular driveways and the access of apartments to light and air.

The resolution provides that the Community Board will not reconsider its denial of the proposal unless Olnick withdraws its application and resubmits a new plan, without the proposed rezoning, as well as a legally binding and permanent tenants-benefits agreement and community-benefits agreement. The resolution also requires that any new plan include a set of detailed and comprehensive plans to address concerns raised by the community, including density, public health, and economic impact.

The proposal will now be reviewed by Manhattan Borough President Gale Brewer, who will issue a recommendation on it within 30 days. The Borough President has scheduled a hearing for Monday, November 18, 2019, at 6:00 PM at the Kennedy Center (34 West 134th Street) and will take written comments at info@manhattanbp.nyc.gov.

Multiple elected officials voiced their support for LT-ACT and shared opposition to the proposal ahead of Wednesday’s vote via letters submitted to Cicely Harris, who chairs Manhattan Community Board 10, including City Council Member Bill Perkins, Public Advocate Jumaane D. Williams, State Senator Brian A. Benjamin, Assemblymember Inez Dickens and former Gov. David A. Paterson, a proud resident of Lenox Terrace. (Copies of the letters are available upon request.)