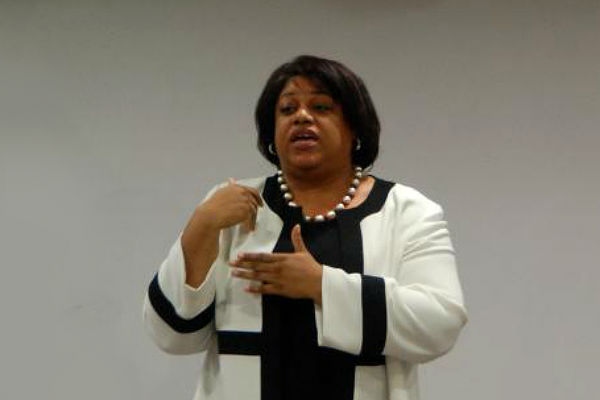 In conjunction with the 29th anniversary of the signing of the Americans with Disabilities Act (ADA) and the Sapolin Accessibility Awards, Mayor de Blasio and the Mayor’s Office for People with Disabilities (MOPD) Commissioner Victor Calise released the 2019 AccessibleNYC report. The fourth annual report provides a comprehensive roadmap to improve quality of life for New Yorkers with disabilities in the areas of: transportation, employment, financial empowerment, housing, health, technology, access to City services and education.

While advancing the progress of initiatives laid out in the previous reports, the report adds a new section on technology. This section discusses the ways in which the City is leveraging assistive technology to remove barriers for people with disabilities, all the while ensuring that the needs of people with disabilities are included in the development of future smart city projects.

“To be the fairest big city in America, we must ensure that New Yorkers with disabilities have equal access to all New York has to offer,” said Mayor de Blasio. “AccessibleNYC highlights our accessibility efforts and offers a roadmap for the future of our city while strengthening our commitment to becoming more inclusive for all.”

“AccessibleNYC documents the work of this Administration to make New York City more accessible in the areas of housing, transportation, employment, education, city government, health, technology, and financial empowerment,” said Deputy Mayor for Strategic Policy Initiatives J. Phillip Thompson. “The progress we have made reflects Mayor de Blasio’s unwavering commitment to ensuring that residents and visitors with disabilities have the tools they need to be fully included in every facet of life.”

“Over the past year, we have continued to improve accessibility for New Yorkers with disabilities in all facets of life,” said MOPD Commissioner Victor Calise. “The fourth edition of AccessibleNYC builds on our previous reports and adds a new section on technology, the great equalizer for people with disabilities. I am extremely proud to issue AccessibleNYC 2019 and thank Mayor de Blasio for his continued support to making New York the most accessible city in the world.”

Highlights from the 2019 edition of AccessibleNYC include:

Transportation: The City has made a concerted effort to ensure that all New Yorkers are able to navigate the city. The Taxi and Limousine Commission (TLC) has steadily increased the number of accessible taxis in the fleet and passed the first-of-its-kind rules to mandate wheelchair accessibility in the for-hire-vehicle sector. Furthermore, the Department of Transportation has continued to increase the number of accessible pedestrian signals and pedestrian ramps. In addition, MOPD is working with our partners at MTA New York City Transit to increase accessibility and efficiency of the New York State-run mass transit and Access-A-Ride paratransit services.

BUY IT ON Shop HW

Technology: NYC’s Digital Accessibility Coordinator working in tandem with the Department of Information Telecommunications and Technology has published the second Digital Accessibility Report. This biennial report notes the progress of accessibility of NYC websites and all other digital products. In addition, MOPD partnered with the Mayor’s Office of Creative Communications to hold the second annual Digital Inclusion Conference. This public event had hands-on workshops, panels, and networking opportunities for digital workers in public and private sectors on internet human rights, digital accessibility, and inclusion.

Access: With the assistance of the Department of Information Technology & Telecommunications, MOPD has expanded ASL Direct by hiring a new Program Supervisor and opening a second location in Human Resources Administration. Callers who are Deaf/Hard of Hearing can—via video call—be directly connected to a Resource Specialist who is fluent in American Sign Language and can provide information about City services. In addition, MOPD has partnered with Small Business Services, elected officials and Business Improvement Districts to provide information on making a business accessible in compliance with the ADA.

Education: Starting in 2019, DOE students with disabilities will receive priority in admissions to school buildings that are fully or partially accessible. In addition, MOPD held a convening of other government offices focused on disability from around the country. Over the course of three days, each agency shared best practices on how they are making their services and infrastructure more accessible for people with disabilities. Furthermore, MOPD partnered with DemocracyNYC to meet with disability advocates regarding access to voting and civic engagement.

For more information on these highlights and other work the City is doing to improve accessibility, the 2019 Edition of AccessibleNYC is available now at nyc.gov/accessiblenyc

“As the largest minority group in the City, people with disabilities continue to face barriers. I am proud to partner with Commissioner Calise and the Administration to make the City more accessible,” said Council Member Diana Ayala, Chair of the Committee on Mental Health, Disabilities, and Addictions. “AccessibleNYC lays the groundwork for inclusion and respect for the disability community and I am determined to work with my Council colleagues to achieve these goals.”

“I send my warmest congratulations to the recipients of the Sapolin Accessibility Awards — their profound commitment to improving the lives of people with disabilities is an inspiration to me and so many others. And I am equally grateful to receive the latest report from the Mayor’s Office for People with Disabilities, which examines our progress on ensuring that New York is truly accessible for all. Through the leadership of MOPD and accessibility advocates, disability rights are slowly but surely being integrated into every facet of city life,” said Council Member Helen Rosenthal (Manhattan, District 6).

“Almost 3 decades after the passage of the Americans with Disabilities Act, New York City is still committed to full accessibility for New Yorkers with disabilities and the fourth annual AccessibleNYC report illustrates the City’s dedication to attaining this goal,” said Assemblyman David I. Weprin. “This innovative report includes policy initiatives addressing all aspects of city life and is an essential framework for improving equity. I thank Mayor Bill de Blasio and Commissioner of the Mayor’s Office for People with Disabilities Victor Calise for their combined efforts to make the vision of the ADA a reality.”

“On the 29th anniversary of the ADA, I’m thrilled that New York City is expanding on the AccessibleNYC agenda. For too long New Yorkers with disabilities have struggled with our largely inaccessible urban environment, and I am pleased to see progress being made,” said Assemblymember Jo Anne Simon. “I am also pleased that a new section on technology has been added this year, as accessibility to technology is so key to bridging the digital divide for people with disabilities and historically overlooked. After 29 years, the ADA’s vision is not fully realized, and I am glad that New York City is working to increase accessibility for people with disabilities in multiple sectors. Thank you to Mayor de Blasio and MOPD Commissioner Calise for their commitment to this important work.”

“In a city constantly on the move and forever marching forward, increasing accessibility is critical. We must all remain committed to helping New Yorkers with disabilities lead full, independent lives, and AccessibleNYC is an important step in the right direction,” said Assembly Member Al Taylor. “By empowering New Yorkers with disabilities and ensuring they have access to transportation, technology, housing, and employment opportunities, among other important resources, we can change so many lives and truly make New York a city of the future.”

“The AccessibleNYC report represents Mayor de Blasio and Commissioner Calise’s commitment to building a more accessible New York City. The report’s priorities work towards creating more access for young people with disabilities in schools, employment, and in our communities. It is a valuable resource to our parents and families, and they look forward to receiving it every year,” said Barbara A. Glassman, Executive Director of INCLUDEnyc, an organization providing training and information for young people with disabilities and their families throughout New York City.

“Lighthouse Guild applauds the Mayor’s Office for People with Disabilities (MOPD) for its continued efforts to improve the quality of life for New Yorkers with disabilities. As technology has long served to make activities of daily living for people with vision loss more productive and safer, I commend MOPD for including it in the 2019 edition of AccessibleNYC,” said Alan R. Morse, JD, PhD, President and CEO of Lighthouse Guild

“The Hearing Loss Association of America, New York City Chapter, is grateful to the Mayor’s Office for People with Disabilities (MOPD) for recognizing and acting on behalf of the hundreds of thousand New Yorkers with the invisible disability of hearing loss,” said Katherine Bouton, President of the New York City Chapter of the Hearing Loss Association of America. “We appreciate that MOPD understands that we are a separate category from the Deaf and that ASL does not help us. We need accommodations in the form of captions and signage as well as assistive listening devices like the hearing loop recently installed in the City Council Chambers. Thank you Commissioner Calise and staff, and thank you, Mayor de Blasio, for the release of AccessibleNYC.”

“The Administration has committed to making every corner in NYC wheelchair accessible, has dedicated resources and personnel to this effort, and is working hard to make taxis, liveries and rideshare services accessible too. We acknowledge and applaud the Mayor’s efforts,” said James Weisman, President & CEO of United Spinal Association

“BILS has enjoyed working very closely with MOPD and other city agencies over the past year on important initiatives including financial empowerment, civic engagement, and overall accessibility. We look forward to continuing to work with MOPD in the coming year to further enhance accessibility for everyone so we can all enjoy everything New York City has to offer,” said Brett L. Eisenberg, Executive Director of Bronx Independent Living Services

“Mayor de Blasio’s April 11th Executive Order, mandating the availability of plastic straws — which are vital for some people with disabilities — at city agencies, is a prime example of how the City and advocates can work together to make New York fully accessible,” said Joseph G. Rappaport, Executive Director of the Brooklyn Center for Independence of the Disabled. “The City must continue to press for other accessibility initiatives, including those highlighted in AccessibleNYC that finally will make this a truly accessible, disability-friendly city.”

“The Staten Island Center for Independent Living (SICIL) provides services to the disability community. Thank you to MOPD for the release of the annual AccessibleNYC report, which provides an overview of all the City’s services,” said Michelle Sabatino, Executive Director of the Staten Island Center for Independent Living. “For example, MOPD’s Project Open House program has greatly helped our constituents remove barriers from their homes. SICIL looks forward to continuing to work with MOPD and the City to increase accessibility for people with disabilities.”

“The Harlem Independent Living Center (HILC) is excited and proud of the many programs initiated by Commissioner Calise and the staff of MOPD in their ongoing efforts to make NYC the most accessible city in the country for people of all disabilities,” said Christina Curry, Executive Director of the Harlem Independent Center. “HILC applauds MOPD for the release of AccessibleNYC and is eager to continue our partnership on behalf of New Yorkers with disabilities.”

“Integrating people with disabilities into the social fabric of this city is critical to increasing opportunities and independence,” said George Contos, CEO of the YAI Network. “Our allies at the Mayor’s Office for People with Disabilities (MOPD) realize this and continue to examine improvements to supports for people with disabilities. YAI stands with MOPD in advancing inclusivity and access across the scope of life in New York.”