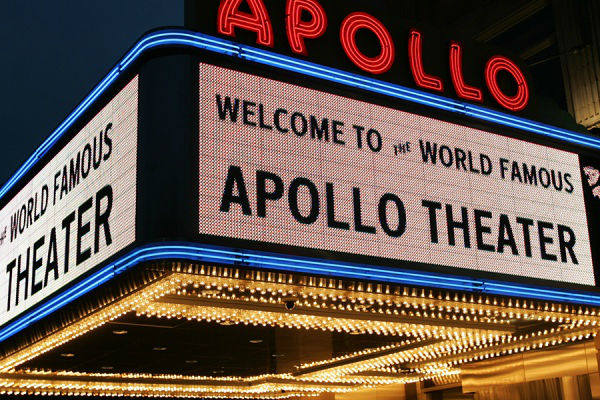 Sirius is the leading audio entertainment company in North America, building on the organization’s over a decade relationship.

In recognition of the gift and for the many special performances held by SiriusXM at the theater since 2010, the Apollo will name the Orchestra Level of the historic theater the SiriusXM Orchestra.

SiriusXM’s exclusive shows at the Apollo further both the Apollo and SiriusXM’s support of artists and help create access for a wide range of audiences.

The generous donation, which comes at a pivotal moment for the non-profit as it opens its doors in January for the winter/spring 2022 season, helps support the Apollo’s mission to create and present work that center Black artists and voices from the African Diaspora.

The gift to the Apollo was funded by the company’s charitable arm, SiriusXM Cares.

Over the past 88 years, the Apollo has hosted audiences from all over the world and launched the careers of incredible artists from Aretha Franklin and James Brown to Lauryn Hill, D’Angelo and countless more. And since 2010, SiriusXM has held a series of critically acclaimed and first-ever performances at the theater featuring a range of artists including Lady Gaga, Paul McCartney, U2, Pitbull, and Bruce Springsteen.

In recent months, as part of the Apollo and SiriusXM’s more than decade-long relationship, the organizations have presented an array of invitation-only concerts for SiriusXM subscribers and Pandora listeners, including Grammy Award winner Alicia Keys, who gave a special performance in her hometown of New York City last month; the singer-songwriter H.E.R., who originally debuted on the theater’s stage as part of “Showtime at the Apollo”; and Coldplay, who made their Apollo debut as part of SiriusXM and Pandora’s Small Stage Series in September. At the time, Coldplay frontman Chris Martin shared with the audience, “We’ve been dreaming of playing here for a long, long time.”

“I am incredibly grateful to SiriusXM for their continued commitment to the Apollo and their immense generosity. Bringing together the country’s leading audio entertainment company and the world’s leading home for Black artists is an ideal match, and it’s been an honor to work with them to bring performances from some of the most iconic performers to the Apollo Stage,” said Apollo President and CEO Jonelle Procope. “The Apollo has long been a vibrant platform for artistic innovation, from musical and comedy performances to timely conversations on topics facing our communities. I look forward to our continued collaboration with SiriusXM as we celebrate Black excellence on our stages.”

“Ever since we held our first special concert there in 2010 with Paul McCartney, we have seen why the Apollo is hallowed ground for artists, their joy and excitement so visible as they perform on its stage,” said Scott Greenstein, President and Chief Content Officer of SiriusXM. “We are proud to support the Apollo and its mission, and we look forward to bringing many more great shows to the world-famous Apollo.”

Looking ahead to 2022, the Apollo will offer a dynamic line-up of free and ticketed programs in person at the Apollo’s historic theater and online on the Apollo Digital Stage. Highlights include the long-anticipated return of the Amateur Night at the Apollo competition on Wednesday, February 16 at 7:30 pm EST; Apollo Master Artist-in-Residence Ta-Nehisi Coates and The Roots’ Tariq “Black Thought” Trotter, in conversation; the Lyricist Lounge 30th Anniversary Concert featuring hip-hop trailblazers to be announced; the premiere of The Gathering: A Collective Ring Shout, co-presented by the American Composers Orchestra and the Apollo and co-curated by National Black Theatre; the return of the Africa Now! Festival featuring East African jazz vocalist and Grammy nominee Somi; and more. As with all of its programming, the non-profit Apollo’s season centers Black artists and voices from the African Diaspora with myriad opportunities for artists and audiences to come back together at the iconic theater. For a complete line-up and more information about the Apollo, please visit www.ApolloTheater.org.

The non-profit Apollo Theater is a performing arts presenter, commissioner, and collaborator that also produces festivals and large-scale dance and musical works organized around a set of core initiatives that celebrate and extend the Apollo’s legacy through a contemporary lens, including the Women of the World (WOW) Festival as well as other multidisciplinary collaborations with partner organizations.

Since introducing the first Amateur Night contests in 1934, the Apollo has served as a testing ground for new artists working across a variety of art forms and has ushered in the emergence of many new musical genres-including jazz, swing, bebop, R&B, gospel, blues, soul, and hip-hop.

Pandora, a subsidiary of SiriusXM, is the largest ad-supported audio entertainment streaming service in the U.S. SiriusXM’s subsidiaries Stitcher, Simplecast, and AdsWizz make it a leader in podcast hosting, production, distribution, analytics, and monetization.