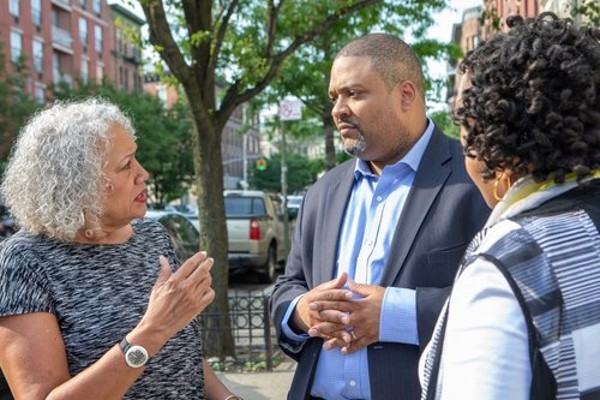 At the stroke of midnight on New Year’s Day, history maker Alvin Bragg became Manhattan’s first Black district attorney and only the fourth prosecutor elected to the office in the past 80 years.

Bragg was sworn in at a private ceremony officiated by the Clerk of New York County, the Hon. Milton Tingling in lower Manhattan on Friday afternoon.

Due to the surge of COVID cases, a community inauguration ceremony has been rescheduled for March 6th, 2022.

Alvin Bragg being sworn in as Manhattan DA by the Hon. Milton Tingling as his wife, Jamila Ponton Bragg (center) holds a bible at the New York County Courthouse in Manhattan, New York on Friday, Dec. 31, 2021.

Bragg zeroed in on the leadership-by-reform theme he honed during his campaign, and promised that his office would put the community first.

“I will govern tirelessly from the perspective of the communities most impacted by the justice system,” Bragg said. “Together we will make the Manhattan DA’s Office a leader on reforms that make our communities safer: ending racial disparities and mass incarcerations; getting justice for survivors of sexual assault and stopping the flow of guns onto our streets.”

Bragg said his office would also expand treatment for mental health and drug addiction and address the “humanitarian crisis at Rikers Island.”

Bragg, 48, retold the story of how his quest for justice was shaped by his experiences as a private citizen. He said he was wrongly stopped at gunpoint by the police three times; had a semi-automatic weapon pointed at his head, and just recently had to walk through a crime scene – the aftermath of a shooting on his block– to get into his home.

Related:  Holiday Fun comes To City College Center For The Arts In Harlem

Bragg said he also had a close relative return from incarceration and solitary confinement and stay with his family as he tried to get back on his feet.

“This has been a long journey that started in the same place I’ve lived my whole life, the village of Harlem,” Bragg said. “

“This has been a long journey that started in the same place I’ve lived my whole life, the village of Harlem,” Bragg said. “And today, that 15-year old boy who was stopped at gunpoint by the police is the Manhattan district attorney.”