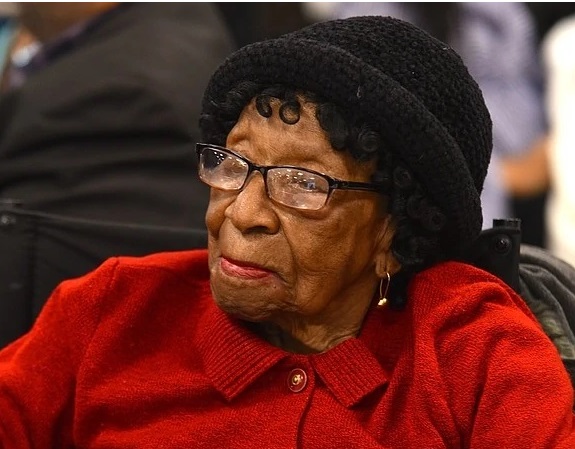 Mrs. Alelia Murphy who was born on July 6, 1905, in North Carolina making her the oldest living person in the entire country!

“This is Harlem history, this is family history we are standing here with a Harlem landmark, a Harlem icon – Mrs. Alelia Murphy,” said State Sen. Brian Benjamin. Her age has been validated by the Gerontology Research Group.

The party was held on the second floor of the Adam Clayton Powell, Jr. State Office Building. Among those paying tribute are elected officials, including Sen. Benjamin, who represents Upper Manhattan. The party was thrown by the African American Caucus of 1199SEIU. Mrs. Murphy’s daughter, Rose Green, is a retired 1199 member.

“I’m so proud of her and so glad to have her as long as I have had,” said Green. Green says she calls and or sees her mother daily, and refers to her as her best friend.

Mrs. Murphy was born into a family of 12 children in North Carolina. She moved to Harlem because she wanted to be a part of the Harlem Renaissance in the 1920s. She lost her husband early – a widow since 1953 – she raised her daughter, Ms. Green, and a son who pre-deceased her. Murphy became a respected resident of Harlem, getting involved in her church and other community organizations.

“My grandmother, her strength I don’t know where she gets it from but she has been through so many things, she is the glue that holds this family together,” one of her granddaughters, Nefer Nekhet, tells PIX11.

The record-setting supercentenarian says the secrets to longevity are a healthy diet and an active lifestyle, her nurse, Natalia Mhlambiso told The Manhattan Times.

“She grew up in the South in the days before processed food, so she ate very healthy,” Mhlambiso, who visits Murphy twice a week, told the local outlet. “Keeping active when you are younger, and eating healthy and continuing to do so — it really does help a lot,” Ms. Mhlambiso continued.

Read the entire article here, and pass me the vegies.