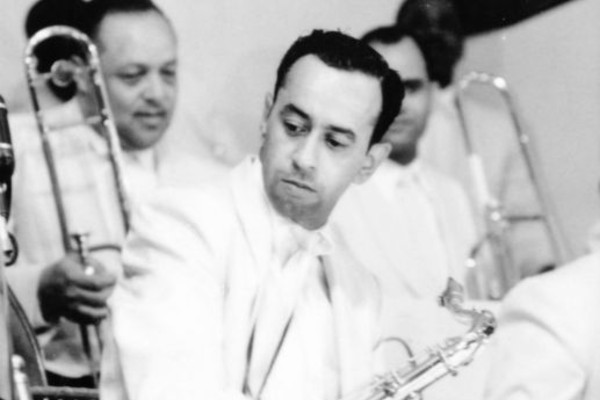 He was a jazz tenor saxophonist best known for his association with Duke Ellington.

At the 1956 Newport Jazz Festival, Gonsalves played a 27-chorus solo in the middle of Ellington’s “Diminuendo and Crescendo in Blue,” a performance credited with revitalizing Ellington’s waning career in the 1950s.

Born in Brockton, Massachusetts, to Cape Verdean parents, Gonsalves’ first instrument was the guitar, and as a child he was regularly asked to play Cape Verdean folk songs for his family.

He grew up in New Bedford, Massachusetts, and played as a member of the Sabby Lewis Orchestra.

His first professional engagement in Boston was with the same group on tenor saxophone, in which he played before and after his military service during World War II.

At the 1956 Newport Jazz Festival, Gonsalves’ solo in Ellington’s song “Diminuendo and Crescendo in Blue” went through 27 choruses; the publicity from this performance is credited with reviving Ellington’s career.

The performance is captured on the album Ellington at Newport. Gonsalves was a featured soloist in numerous Ellingtonian settings.

The Paul Gonsalves video below does a fantastic job capturing Mr. Gonsalves’ sensitivity to each cord, the tone, and The Dukes sound:

He received the nickname “The Strolling Violins” from Ellington for playing solos while walking through the crowd.

Gonsalves died in London a few days before Duke Ellington’s death, after a lifetime of addiction to alcohol and narcotics.

Mercer Ellington refused to tell Duke of the passing of Gonsalves, fearing the shock might further accelerate his father’s decline.

Ellington and Gonsalves, along with trombonist Tyree Glenn, lay side by side in the same New York funeral home for a period of time.

Gonsalves is buried at the Long Island National Cemetery in Farmingdale, New York.

On June 25, 2019, The New York Times Magazine listed Paul Gonsalves among hundreds of artists whose material was reportedly destroyed in the 2008 Universal fire.