Harlemite AJ Walker And Others “Sleepover” At The TADA! Youth Theater 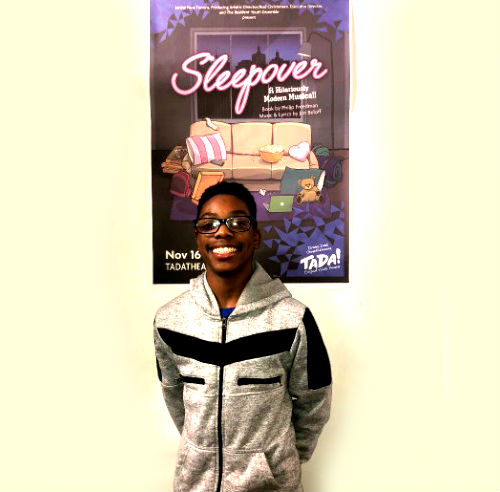 Sleepover is a hilariously modern musical that tackles all the hairy situations in the glorious stage of young teen-hood. While Simone frets about not fitting in because she’s new to NYC and doesn’t know anyone at the party, Mia worries about whom to invite. As for the boys? They’re plotting a way to crash the party.

Sleepover will be AJ Walker’s seventh show at TADA!, and he will be playing Frank, the male lead of the show. “I think I have a few things in common with Frank. We both love hanging out with friends, and we’re both incredibly loyal. However, Frank is definitely next-level outgoing, and I’d like to be as fearless as him,” AJ says.

AJ describes participating in TADA! as a stress reliever. “It’s like my sanctuary, an escape from the real world. Once I get to TADA!, I can let go and just have fun. Every show I do has its own place and environment, which I love,” he explains.

AJ says that his hero is Nina Trevens, the co-founder and Producing Artistic Director of TADA! He feels that Nina is his inspiration. “She’s been through so much, yet she still comes to TADA! and works with us. She’s always there for all of her students, which is amazing,” he says.

AJ, who is from Harlem, is currently a freshman at the Horace Mann School in the Bronx. “If I decide to pursue theater as a career path, I would like to be a scriptwriter,” he explains.

For tickets to Sleepover, please visit http://www.tadatheater.com/shows/buy-tickets-3 for more information.

Sleepover’s book is by Philip Freedman, with music and lyrics by Jim Beloff. The production is directed and choreographed by Joanna Greer, TADA!’s Associate Artistic Director and Resident Choreographer, with music direction by Matthew Gregory.