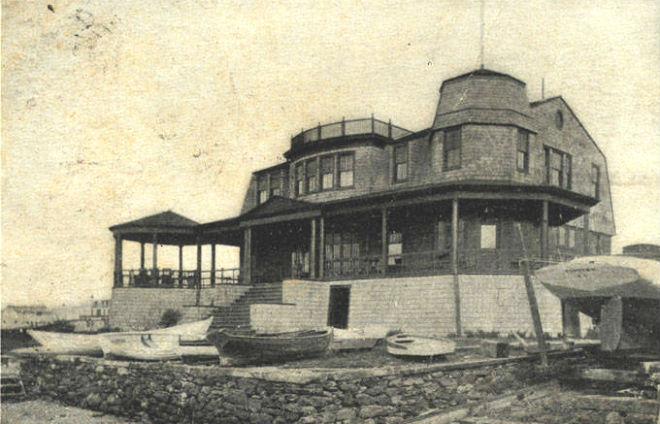 The Harlem Yacht Club, currently based on City Island in the New York City borough of The Bronx and incorporated in 1883.

Is the third oldest continuously functioning yacht club in the City of New York, the first being The New York Yacht Club, founded in 1844 in Harlem New York.

The Club is currently active in Manhattan and in Newport, Rhode Island), and followed by the Williamsburgh Yacht Club (founded in 1871 in Brooklyn, and currently still active in College Point, Queens).

The club currently has over 100 enrolled members in various membership categories.

Harlem Yacht Club was originally one of several boating clubs founded in the 19th century on the banks of the Harlem River in Harlem, New York, where it established its first clubhouse at the foot of 121st Street.

HYC was originally one of several boating clubs founded in the 19th century on the banks of the Harlem River in Harlem, New York, where it established its first clubhouse at the foot of 121st Street.

Over the next two decades, the club grew and acquired a station at College Point, Queens, where most of its races and regattas took place.

In 1894, the club sold the station at College Point while establishing a new one on property it had purchased on City Island, as its membership grew.

For the next ten years, the club occupied both locations – a clubhouse in Harlem and its City Island station on Hunter Avenue.

In 1898, the club began building an impressive Victorian-era clubhouse on City Island, which opened in June of the following year. Its opening was heralded by a “salute of seventeen guns … an illumination [of the fleet], and fireworks ashore and afloat.”

By 1901, the New York Times noted that…in place of the fishing smacks and oyster boats that once anchored in East Chester Bay is the fleet of the Harlem Yacht Club. In 1903, the club gave up its location in Harlem, which was taken over by the newly-formed Metropolitan Yacht Club.

HYC has been at its present location on City Island since then.

The clubhouse built-in 1898 was destroyed by fire on May 29, 1915, and was replaced by the club’s current three-story structure that same year.

This trophy, presented by Thomas Lipton, had been won by club member J.A. Crowley, in 1913.  Also lost were equipment and records needed to run the annual regatta.

The nearby New Rochelle Yacht Club (no longer extant) loaned HYC the required equipment to run the regatta that year.

HYC conducted numerous regattas and became known locally for its Memorial Day Regatta. Conducted on its own initially, this regatta later became part of the YRALIS championship circuit. For over 60 years, this race was considered to be the start of the yacht racing season in western Long Island Sound. In 1892, seventy yachts participated in the event.

In its 1911 YRALIS Memorial Day regatta, the HYC hosted the first regatta of the Star class – a small fixed-keel sloop that was established as an Olympic Games class in 1932, and is still raced today. In that same year, The New York Herald reported on the Stratford Shoal Race: Fast time was made by the twenty-six yachts that took part in the annual Stratford Shoal races of the Harlem Yacht Club, which were started from off the Execution Light… As was common in that era, the race had both power and sail divisions.

The NYYC Fifty class was so evenly matched that after sailing the 15-1/2 nm triangle course in just shy of two and a quarter hours, the last place boat finished only one minute and forty seconds after the leader.

The regatta was sailed in a nine to twelve knot northwesterly and lumpy seas leftover from a northeasterly wind that morning.

In 2000, the club was involved in a legal battle regarding the traditional colors ceremony. Following long-standing tradition at many yacht clubs, a cannon would be fired at sunset to signal that the American flag was about to be lowered for the day, and that all those present should stand with respect.

A complaint was filed against the club due to the noise of the cannon firing. The New York City Environmental Control Board ruled that the sound of the cannon violated city noise ordinances.

The club argued that the firing of the canon was a patriotic expression and thus constitutionally protected free speech.

In 2007, an appellate court ruled that the noise levels produced did indeed violate the Administrative Code of the City of NY, but that the club could still fire the canon, but only at reduced sound levels.

Today the Harlem Yacht Club has a diverse membership that is drawn primarily from New York City, Westchester County, NY, and New Jersey, and conducts an active calendar of racing and cruising events for owners of sailboats and powerboats.

Many of the boats are kept in the club’s large mooring field in Eastchester Bay, where it operates a 24-hour launch service during the yachting season. The club operates an active restaurant and bar on its premises.

Photo credit: The Harlem Yacht Club, on City Island in the New York City borough of The Bronx and incorporated in 1883 – present.