Harlem Through The Lens Of Dawoud Bey 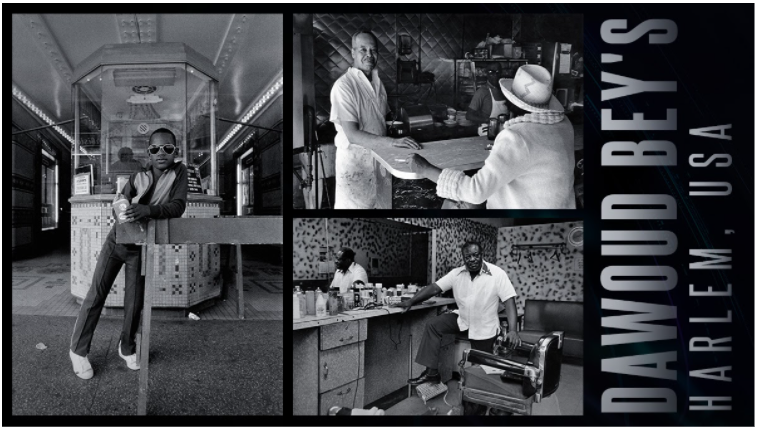 Over the years, Harlem, a neighborhood in Manhattan, has undergone a transition that photographer Dawoud Bey best captures.

Some of the qualities that defined Harlem as a lively place in the past, such as jazz clubs, soul food, and rich African-American heritage, are still very much present up to date.

What makes Dawoud Bey’s perception of Harlem stand out is that he communicates real feelings and contemporary issues of a society using pictures. He has had several art projects such as Night Coming Tenderly, Syracuse New York, and The Birmingham Project through his passion for photography and vision of positively impacting humanity.

However, for this particular article, the focus will be on his two projects that reflect the neighborhood of Harlem—the Harlem USA Series (1975-1979) and the Harlem Redux (2014-2017).

The Harlem USA Series marks the beginning of Dawoud Bey’s career as a photographer and a champion of the black community through his photography. Born in 1953, Dawoud Bey was raised in Harlem and got to experience the lively neighborhood together with his relatives and other community members. However, after a few years, his parents moved to Jamaica, Queens, searching for greener pastures, but Harlem had already won Dawoud’s heart.

When he was 16 years old, he came back to Harlem to see the Harlem On My Mind Exhibition that was the talk of the town. Despite the protests that were happening, Dawoud had already made up his mind not to miss it, and in his TEDx talk, all his parents told him was to take care and get back home on time.

Upon arrival at the exhibition hall, Dawoud says he was transfixed and mesmerized. First, because this was his first time in an art museum, and second, he had never seen photos of African-American people as ordinary men and women and not depicted stereotypically. The art pieces by James VanDerZee showed Harlem’s Renaissance period, where the black community thrived in the creative arts.

This humbling experience spiked Dawoud’s interest, and from there, he got his first camera and started his photography journey that tells the story of the black community in Harlem. He started the Harlem USA Series in 1975 and ended it in 1979 with 25 in-depth and captivating photos.

The photos depicted the black community as an empowered nation, children with big dreams, and a free people full of confidence and happiness. In summary, we can say that he “reimagined history.”

Some of the photos in the series include:

Just recently, National Geographic released a poster with a cartoon map of Harlem in 1932 that shows where to find theatre performances, gambling casinos for police officers and famous musicians. Venues, notably the Cotton Club and Savoy Ballroom, were the center of the nightlife. Of course, a lot has changed since then, and casinos are no longer prohibited, and you can even play them online.

Over 35 years later, Dawoud Bey returns to Harlem, where he had his first project but with a different mindset. He aimed to capture the changes in the physical and social fabrics of society. What was once a vibrant community bursting with random activity had now transitioned into a more diverse, gentrified, and homogenized neighborhood.

The large-format-colored photos of this new series show the demographic shifts, changes in urban landscapes, and Harlem’s redefined identity.

Dawoud Bey said that “Harlem is a community that is increasingly defined by a sense of ‘erase-and-replace’ wherein pieces of social and cultural history, along with memory itself, are routinely being discarded, with only the nostalgic residue of that memory being evoked.”

His first project, the Harlem USA Series, was exhibited at the Studio Museum, Harlem, in 1979, and since then, he has had several exhibitions worldwide. Some of the institutions he has shown his work include the Art Institute of Chicago, the Cleveland Museum of Art, the Detroit Institute of Art, the Whitney Museum of American Art, the Barbican Center in London, and the National Portrait Gallery in London.

The exhibition of his latest project, the Harlem Redux, will be something to look forward to as it will be the first time that the two series of Harlem will be shown side by side.

Hi! I’m Bryan, and I’m a passionate & expert writer with more than five years of experience. I have written about various topics such as product descriptions, travel, cryptocurrencies, and online gaming in my writing journey. The latter is one of my favorite topics, and you can find some of my premium casino content at OUSC.