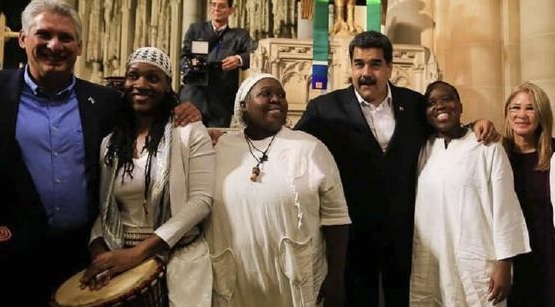 The detour was made along with Cuban President Miguel Diaz-Canel, and both men spoke at a solidarity event held at the Baptist church.

Riverside has a rich history of progressive struggle, and has been the site of visits from prominent world leaders such as Nelson Mandela and Fidel Castro over the years. The church is also famous for holding civil rights, anti-nuclear, and peace protests, and for organising the poor, largely African-American and Latino community of Harlem. It was at this church that Martin Luther King Jr. declared his opposition to the Vietnam War in 1967.

Maduro’s participation in New York had earlier been cast into doubt when he cited security concerns over travelling to the USA. Nevertheless, he made the journey for the first time since 2015, only to be greeted by the announcement of further sanctions by the US Treasury Department and talk of a military uprising by US President Donald Trump. His presence was, though, greatly appreciated by the 2000 strong Harlem crowd.

Maduro’s predecessor, Hugo Chavez, also made a habit of escaping from diplomatic duties to prioritize visits to poor US communities, a strategy which Maduro adopted from the outset on his first visit to the US as president in 2014, when he visited the Bronx.

For his part, Cuban President Diaz-Canel told the Harlem crowd that he had come “to ratify solidarity and the unwavering commitment [of the Cuban people] to justice and to achieve a better world which is, indeed, possible.”

“Cooperating with exploited people in other countries is always a political principle and a duty of revolutionaries,” he went on to state, quoting Cuban ex-President Fidel Castro.

“In this church incredible things have taken place (…), here we are amongst friends, (…) Venezuela and Cuba, together receiving the love of the US people as friends,” Diaz-Canel continued.

Apart from the support of his Cuban ally and the people of Harlem, Maduro also received the backing of a series of world leaders who spoke out in the UNGA against the latest US sanctions and threats.

Bolivian President Evo Morales called on the Trump administration to “withdraw the illegal and unilateral measures,” and abandon any pretension of a military intervention, stressing that “Venezuelans should sort out Venezuela’s problems.”

Speaking from New York, China’s Foreign Minister Geng Shuang also criticised Washington’s actions, stating that “each country has the right to choose their own path of development and their own social system.”

For his part, El Salvadorian President Salvador Sanchez Ceren also objected to US saber-rattling, telling world leaders that “We reject any threat from foreign powers of military intervention.”

At parallel meetings, the governments of Russia and Iran also voiced support for Venezuela, with Russia’s Foreign Minister Sergei Lavrov declaring that “we are ready to offer [Venezuela] complete assistance.”

Likewise, Iranian President Hassan Rouhani told the press that “The people of Iran and Venezuela have continuously been under the aggression and sanctions of the United States”.

Representatives from five Latin American nations, alongside Canada, handed in a formal request to the International Criminal Court (ICC) to investigate the Venezuelan government on possible crimes against humanity, including murder and torture.

The document was signed by the right wing governments of Argentina, Chile, Colombia, Peru, Paraguay, and Canada, and accompanied by an Organisation of American States report which Venezuelan authorities have described as “propaganda” and “a grotesque media farce”.

The lack of more signatures to the petition can, though, be considered a victory for Caracas. The 17 member Lima Group has led the charge against Venezuela in the international arena, and it remains unclear why 11 of its members declined to join the petition.

Other leading opposition figures were also vocal yesterday, with Venezuela’s ousted Attorney General, Luisa Ortega, who is fleeing corruption charges in Colombia, unsuccessfully calling on the Trump administration to arrest Maduro while he was in New York. A handful of Venezuelan opposition supporters also protested outside the UN building as the Venezuelan President spoke.

Washington’s allies did, however, have more success in Geneva, where the UN’s Human Rights Council passed a resolution put forward by US allies Wednesday which urged Venezuela to accept foreign-led humanitarian aid, something Caracas has repeatedly claimed is not needed, denouncing the narrative of a “humanitarian crisis” as a pretext for a foreign intervention. Venezuela’s ambassador to the UN, Jorge Valero, described the resolution as “the start of an escalation of interventionism.”