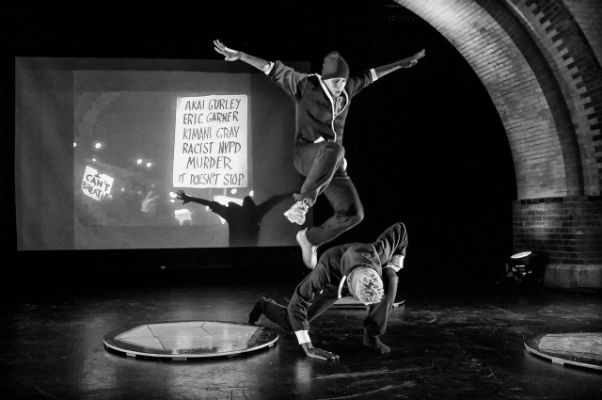 “In 1983, Harlem Stage, (then named Aaron Davis Hall, Inc.) was founded in part on the principal that artists of color, particularly Black Artist’s voices were censored,

not treated equitably, not given the resources, not provided the platforms that were commensurate with their talents. In short they were denied equal access. Our mission was to provide access, resources and enable audiences to witness the visionary work of excellence by artists of color that examined and critiqued the world, our world. We have presented and commissioned their work for 37 years and continue that work at the intersection of Art and Social Justice.

Our collective work continues to amplify the voices of the millions who have taken to the streets demanding justice not just this time, but also historically to examine and denounce racism, its terrible legacy and its recurring deleterious impact. We are proud of our past and are finally seeing a gradual increase in the presentation of these artists in programming offered by institutions across the country and the world.

Simultaneously we realize that while we have seeded the field with their representation, we have not been treated equitably, not given the resources that are required to develop and consistently sustain this work, this investment in artistic equity. The development of new work is a costly matter, from artists’ commissions, to rehearsal fees to marketing expenses, each new work takes from 1 to 2 years to develop and costs an average of $200,000 to produce.

Our commitment has been rewarded in work of outstanding quality and insight, art that transforms. Our long history includes: Craig Harris’s Brown Butterfly on the real fight of Cassius Clay to become Muhammad Ali, triumphant in the ring but imprisoned for his refusal to fight in an unjust war; the late Sekou Sundiata’s 51st Dream State, a state of imagined grace founded in the recognition of our common humanity; and later through our WaterWorks initiative—Vijay Iyer and Mike Ladd’s Holding it Down, revealing the impact of another war in which soldiers of color were traumatized in a conflict not of their own making; Carl Hancock Rux’s Makandal, developed as an opera examining the life and history of the first betrayed Haitian revolutionary (which we had to shelve because we could not raise the funds required to bring the project to full staging); the two and a half year citywide celebration of the works of James Baldwin which culminated with Stew’s Notes of a Native Song which included his homage to the innocence of young Trayvon Martin in Florida; and Meshell Ndegeocello’s, Can I get a Witness?

The Gospel of James Baldwin, with its church infused music and sermons that became a healing ceremony that cautioned and prepared us for the pending “Fire Next Time” following the election of Donald Trump; the community reckoning of Antigone In Ferguson done in collaboration with Theatre of War in recognition of the murder of Michael Brown; our tribute to the revolutionary thinking and music of Sun Ra led by Nona Hendryx in the Temple of Dendur in collaboration with the Metropolitan Museum of Art.

And then the COVID-19 curtain fell just as we were prepared to produce the American premiere of A Drop of Midnight by Afro-Swedish hip hop star, Jason “Timbuktu” Diakité—a performance based on his autobiographical novel tracing the journey of his family from Harlem, to Sweden and his return to their roots in South Carolina and the racism that he encountered along the way.

Our calling out for justice has been long and consistent, not from the streets but from the stage, from Harlem Stage.”

We are sensitive and keenly aware of the impact this shutdown has on independent artists. Please visit our website and review our Harlem Stage Artist Resources Google Sheet—we update both frequently with information on grants, emergency funding and other resources in support of
artists sustaining their art practices.