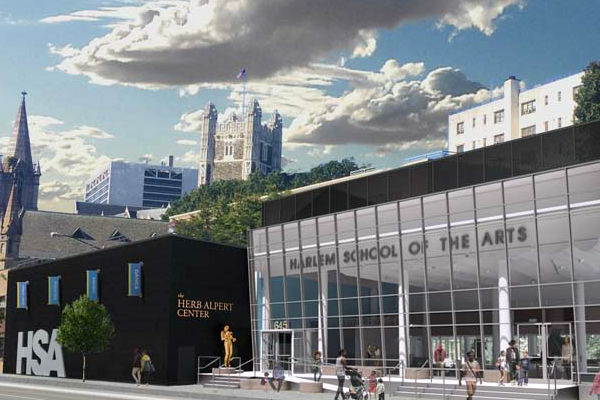 The $9.5 million dollar renovation of the Harlem School of the Arts (HSA), underwritten by legendary musician/philanthropist Herb Alpert and the Herb Alpert Foundation, has been completed.

According to a statement from HSA Board Chair Charles Hamilton, Jr. Over the past decade, HSA has received more than $17 million dollars in financial support from the Herb Alpert Foundation, including this latest gift.

The project, known as the Renaissance Project, which broke ground a year ago and was completed on time and on budget despite the pandemic, has transformed the Harlem School of the Arts (HSA) into a dazzling cultural center. The building, which was originally designed by architect Ulrich Franzen, has received a major facelift.

A main section of the austere brick façade has been replaced with a cutting- edge, angled glass curtain wall, offering the community and the public at large, a transparent view inside the facility where so many young lives have been enriched and given a sense of purpose and focus. The remainder of the brick exterior has been repaired, treated, and stained; windows replaced, exterior lighting, and new signage added.

“We have been this walled-in oasis for a very long time. Now, we can share the beauty that our young people create within the safety of this space, and under the guidance of our extraordinary staff and teaching artists,”

“We have been this walled-in oasis for a very long time. Now, we can share the beauty that our young people create within the safety of this space, and under the guidance of our extraordinary staff and teaching artists,” said HSA President, Eric Pryor.

The design team led by Celia Imrey/Imrey Studio, LLC, a New York-based design studio specializing in museum and library design, along with Eric K. Daniels, the architect of record, brought their combined decades of experience and a clear approach to the work of enhancing and reconfiguring key portions of the 37,000-square foot building, while Seamus Henchy and Associates, Inc. managed the flow of work.

Once shielded from view, the spectacular public space/performance gallery dubbed, Dorothy Maynor Hall, has been fully re-imagined by legendary acoustician/architect, John Storyk, who first rose to prominence for his work on Jimi Hendrix’s Electric Lady Studios.

The high fidelity, duo audio/speaker system was donated by Harman Kardon, a division of Stamford-based Harman International Industries, a subsidiary of Samsung Electronics.

The thorough modernization of the gallery space renders it one of the best performance/music venues in the city, and allows optimized use of the space for a wide range of events while providing students a professional performance environment that will drive their creativity and motivate them to excel.

“As musicians, whether performing or recording, my wife Lani and I know the value of having a space that allows the audience a full appreciation of what we artists are delivering,” said Herb Alpert, who has taken a personal, hands-on interest in the renovation project.

Through their Foundation, the multi-Grammy Award-winning couple has been supporting numerous arts education programs and institutions, including the annual Herb Alpert Award in the Arts which has provided substantial financial support to mid-career artists – this year announcing a doubling of awardees from five to ten.

Herb Alpert stated, “When Lani and I became involved with this organization, it was because the kids who bring their passion for the arts to this building deserve a space as beautiful as the art they create. And that’s what this renovation is all about – the kids. They are the future of art, and they are our future artists.”

Immediately upon entering HSA, visitors check in at the newly positioned security desk before gaining access into the main gallery and other parts of the building. A series of decorative murals, installed on the walls in the main lobby, visualize the mission and promise of HSA and charts the history of the organization and its founder Dorothy Maynor.

The HSA Store shares space with the Cafe, a vibrant, sun-drenched waiting area for parents, students, and visitors. The back-garden courtyard has been revamped.

Improvements include the installation of a new uplighting system that provides dramatic night time effects, as the light reflects against the natural rock wall, and the building’s signature built-in waterfall becomes visible from the street.

“Within the scope of work that has just been completed were a number of necessary repairs that will make the building far more energy-efficient, and will improve the safety of our students and the public,” said Mr. Pryor.

Board Chair, Charles Hamilton, Jr., reiterated the importance of the renovation to the 56-year-old institution. “This has always been a special place with the highest standards of professional training. With the completion of the Renaissance Project, HSA has truly transformed into a cultural destination. I believe it is what our founder imagined from the very beginning, and this is all thanks to the generosity of Herb Alpert, his wife Lani Hall, and Rona Sebastian, President of the Herb Alpert Foundation and a member of the HSA Board.”

Students will not immediately have an opportunity to see the changes made to the building due to COVID-19 and the suspension of in-person classes. “But when they do, what a moment that will be,” said Rona Sebastian. “Herb, Lani, and I are hoping to be there, to share in the excitement when the doors of HSA open once again, welcoming back the hundreds of students who annually fill the corridors of this historic institution.” The ribbon-cutting celebration, which had been originally scheduled to take place this Fall, has now been moved to the Spring of 2021.

The completion of the transformative project marks another milestone in the evolution of the corridor along 141st-145th and St. Nicholas Avenue. HSA sits as an anchor on the extended block which is fast becoming an educational campus comprised of the Neighborhood Charter School, which opened for classes in Fall of 2019; the Harlem Academy, which broke ground on their 29,000-square foot, five-story facility this past August, and the newly renovated Harlem School of the Arts.

The Harlem School of the Arts, recognized as a multidisciplinary cultural institution, providing accessible quality arts education, world-class training, and an interdisciplinary curriculum, is perfectly poised to become an inclusive arts partner to the members of this campus, as it has been to other schools and organizations in the community.

HSA reaches over 10,000 individuals annually through a variety of public programs and community performances; more than 1,200 students enroll in classes annually; the organization holds more than 4,000 group classes, provides over 5,000 private lessons, and has a growing roster of alumni who have gone on to top ranked colleges, universities and conservatory programs, as well as celebrated careers in the arts, politics and other industries.

HSA reaches over 10,000 individuals annually through a variety of public programs and community performances; more than 1,200 students enroll in classes annually; the organization holds more than 4,000 group classes, provides over 5,000 private lessons, and has a growing roster of alumni who have gone on to top ranked colleges, universities and conservatory programs, as well as celebrated careers in the arts, politics and other industries.

Dorothy Maynor, a retired artist, gifted with one of the most beautiful operatic voices, founded the school and was responsible for the construction of the historic building. At the time when Ms. Maynor’s School of the Arts was nestled in the basement of St. James Presbyterian (corner of 141st & St. Nicholas Ave.), a young man with a golden horn was beginning his musical journey and about to make musical history on the opposite coast. Herb Alpert and the Tijuana Brass would go on to break record sales.

More than forty years later, though never having the opportunity to meet one another, they would be brought together by their mutual love of the arts, by their passionate commitment to children and to ensure their access to arts education. These two artists also have a deep recognition of the transformative power of the arts to stimulate creativity, build self-confidence, and add a dimension of beauty to a child’s life that’s important in the development of creative thinkers, and tomorrow’s innovative leaders.

At present, the Harlem School of the Arts remains open online, 24/7, with a schedule of Fall virtual classes and public programs readily available by visiting http://www.hsanyc.org.

The School’s reputation for artistic rigor and excellence attracts students of diverse socio-economic and ethnic backgrounds from the five New York City boroughs as well as Westchester County and the tristate area, which includes Connecticut and New Jersey. HSA’s alumni and faculty are counted among the most talented leaders in the arts.

For over 50-years HSA has enriched the lives of tens of thousands of people through world-class training in the arts. HSA offers its students the freedom to find and develop the artist and citizen within themselves in an environment that teaches discipline, stimulates creativity, builds self-confidence, and adds a dimension of beauty to their lives, empowering them to become creative thinkers and innovative leaders of tomorrow. To learn more about the Harlem School of the Arts, please visit http://www.HSAnyc.org.

The Herb Alpert Foundation envisions a world where all people are blessed with opportunities that allow them to reach their potential and lead productive and fulfilling lives. 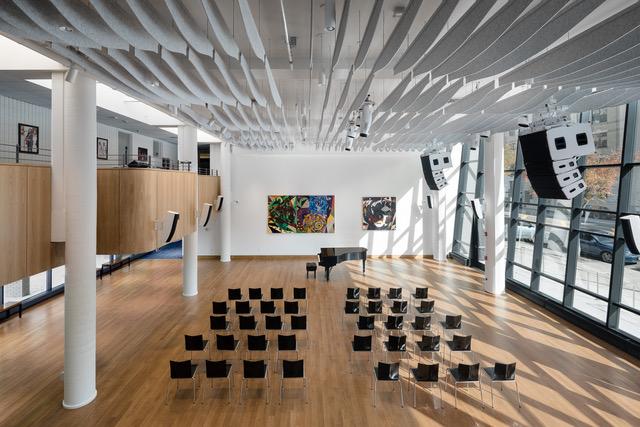 Since its inception, the Foundation is dedicated to championing and investing in the Arts, primarily arts education, a focus on jazz, and support to professionals. This includes programs that see access to arts education as an issue of social justice and that the work of artists in society is what helps us not only to appreciate our differences but also to celebrate them reports our source.

This work often dovetails with the Foundation’s support in the area of Compassion and Well-Being, which invests in organizations that understand the importance of empathy and cooperation in our daily interactions with others and the positive effects inherent in restoring individuals’ and families’ abilities to stand independently. Please note: The Foundation does not accept unsolicited proposals.

Photo credit: 1-2) Harlem School of the Arts at the Herb Alpert Center.