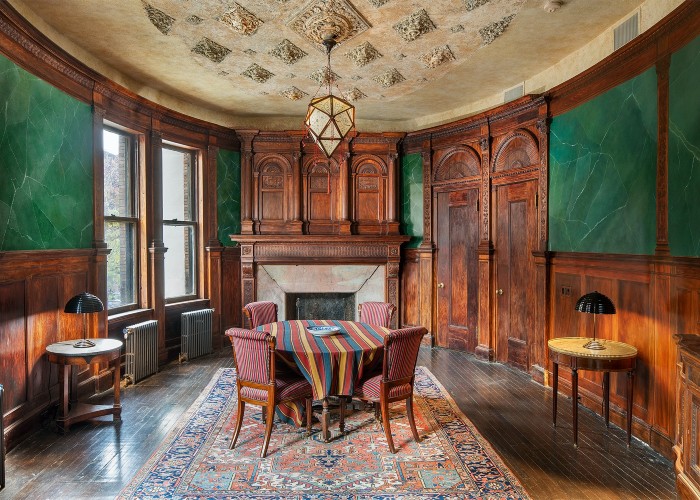 The New York Landmarks Conservancy has announced the winners of the 2022 Lucy G. Moses Preservation Awards.

1 West 123rd Street in Harlem is among the projects that will be recognized at the Awards Ceremony on April 20th at 6:00 pm at The Cathedral of Saint John the Divine in Harlem, Manhattan.

James Fenton and Darryl Pinckney took on a labor of love to restore their extraordinary home at 1 West 123rd Street in the Mount Morris Park Historic District.

The 1890 neo-Renaissance house was built for James Dwight, owner of the Arm & Hammer Baking Soda Company. Later owners left the house in poor condition with many inappropriate changes.

The 2008 financial crisis upended a development scheme: those owners walked away, leaving the building exposed to the elements and a flock of pigeons, who moved into the house.

Working with PBDW Architects, they have spent a decade bringing the house back towards its original, magnificent condition.

The Lucy G. Moses Preservation Awards are the Conservancy’s highest honors for excellence in preservation.

The Awards recognize individuals, organizations, and building owners for their extraordinary contributions to the City.

The Conservancy is grateful for the support of the Henry and Lucy Moses Fund, which makes the Awards possible.

“We have an amazing range of Lucy winners this year,” said Peg Breen, President of The New York Landmarks Conservancy. “From daring work at the top of individual landmarks to a dazzling Art Deco room to remarkably affordable housing projects. The City’s incredible architectural diversity will be on full display,” she added, “and we’re thrilled to be celebrating it all in person again.”

Writers Fenton and Pinckney bought a complete ruin at 1 West 123rd Street in 2010, with no working utilities, subdivided formal rooms, a flooded basement, non-working toilets in every closet, and layers of thick paint hiding original details.

At first, they relied on a nearby fitness center and a microwave to get by. Once the house was secure, with utilities in working condition, they turned their attention to restoring their landmark.

The interior scope addressed every room, completing missing walls in the dining room, installing new fixtures and systems, and re-opening the main stair.

At the exterior, masonry repairs secured the building and more than 50 new windows and skylights match the originals.

The two-story annex, built as a kitchen for the sanitorium, was converted into a library for over 10,000 books.

The quality, condition, and abundance of recovered detail, to say nothing of the survival of the house itself, is a tribute to the vision and persistence of its owners.

The Preservation Organization Award will be presented to Prospect Park Alliance for excellent stewardship of its collection of historic structures and sites.