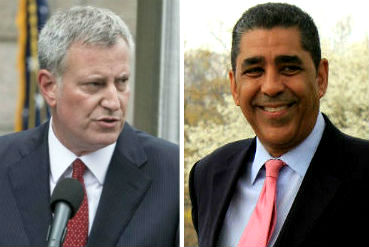 Mayor de Blasio presented Laine Alvarez, wife of the late Detective Luis Alvarez, and members of the extended Alvarez family with a Key to the City today. Alvarez, a former NYPD detective, lead the charge to permanently extend the September 11th Victim Compensation Fund on behalf of his fellow 9/11 first responders. The legislation was signed into law this summer. Alvarez passed away in June after complications from 9/11-related cancer.

The Mayor was joined by John Miller, Deputy Commissioner of Intelligence and Counterterrorism with the NYPD, John Feal, first responder and founder of the FeelGood Foundation, and Jon Stewart, television host and activist.

“Luis Alvarez was a portrait in courage. He never stopped fighting for his brothers and sisters who came to the aid of our city on our darkest days—even until the very end,” said Mayor de Blasio. “Today, we honor a life of extraordinary service, and pledge to never forget the sacrifices he made on behalf of his fellow New Yorkers. His legacy lives on in all of us.”

“Today is the 18 year anniversary of my horrific injury suffered during the cleanup at Ground Zero,” said John Feal, 9/11 First Responder and Founder of the FeelGood Foundation.” A day I usually spend alone and feel sorry for myself. But knowing Louie is receiving the key to NYC today, something I spearheaded, I will take comfort in years to come that we share a special day.”

“Luis Alvarez was a hero whose legacy will live forever,” said Congressman Eliot Engel.” We honor his memory by continuing the fight to give 9/11 first-responders and their families the care they so desperately need and deserve.”

“Detective Luis Alvarez was a true American hero and one of the most courageous, honorable, and profoundly decent people I have ever known,” said Congresswoman Carolyn Maloney. “His lifetime of service can never be repaid, but his legacy lives on. This July, we fulfilled his dying wish by passing the Never Forget the Heroes Act to fully fund and make permanent the September 11th Victim Compensation Fund. Because of Detective Alvarez and his courage, that fund is available to every first responder, survivor, and family who needs it. It is hard to think of anyone more deserving of this honor.”

“Luis Alvarez without any hesitation, put his own health and well-being on the line when he joined fellow first responders on September 11, 2001. For 18 years, Detective Alvarez gave every ounce of life and strength he had to making sure that his fellow first responders and their families would receive the care and benefits they were owed for their service to New York City and our nation,” said Congressman Adriano Espaillat. “When he joined the NYPD, he committed himself to keeping our city safe. When he helped those in need during the 9/11 attacks on our country, he put others before himself. When he saw the need to speak out on behalf of the families and individuals suffering, he used his voice to ensure the 9/11 Victim Compensation Fund would remain viable to support the surviving 9/11 responders for the rest of their lives. We can never repay Luis Alvarez for his selfless deeds, but we vow to always remember him in honor, bravery, and in service to our great city and all who got to know and work with him during his life as a champion.”

“Detective Luis Alvarez was and remains a hero in every sense of the word. With unflinching courage, he served our City and our nation on before, during and after 9/11,” said State Senator Andrew Gournardes. “And he battled relentlessly on behalf of his friends and fellow first responders with 9/11-related illnesses to get the services they and their families are owed. Detective Alvarez left behind a legacy of courage, strength and selflessness that will never be forgotten.”

“A common refrain about the September 11th attacks is ‘Never forget.’ We owe a responsibility not to forget those who sacrificed their safety for others, said Public Advocate Jumaane Williams. “That sacrifice continues, that loss continues, and Detective Alvarez’s fight to get aid for his fellow first responders shows that his heroism continued throughout his entire life. His courage and his commitment to the people of New York City were extraordinary, and it is only fitting we honor him and his legacy now.”

“Detective Luis Alvarez represented the greatest New York can offer. He led a noble and heroic battle—with extraordinary courage and perseverance—championing the cause of his fellow brave 9/11 first responders,” said New York City Comptroller Scott M. Stringer. “We must honor his legacy and continue the fight for what’s right—and as New Yorkers, we will.”

“Detective Alvarez lives on in the hearts of every New Yorker, particularly my fellow 9/11 first responders who are forever grateful for his tireless advocacy on their behalf,” said Brooklyn Borough President Eric Adams. “A Key to the City is a fitting tribute for a hero who legacy is among the finest of the Finest.”

Related: Listen to Harlem Clyde Frazier Jr. who lost his son in the Twin Towers during 911 on The Danny Tisdale Show.

“Detective Luis Alvarez was a hero not only because of his work at the World Trade Center site, but because of his vigorous advocacy on behalf of his fellow 9/11 responders,” said Queens Borough President Melinda Katz. “Detective Alvarez spearheaded the successful fight for a long-term extension to the September 11th Victim Compensation Fund, and the law mandating this extension rightfully bears his name. Queens is proud that the family of Detective Alvarez, who had deep Queens roots, is being presented with the Key to the City in Detective Alvarez’s honor.”

“Nobody is more deserving of a Key to the City than Detective Luis Alvarez who dedicated his life to protecting the citizens of New York City,” said Council Member Donovan Richards, Chair of the Committee on Public Safety. “Det. Alvarez served the NYPD with honor and distinction before September 11, 2001 and then put his health and safety on the line as a first responder in the rescue and cleanup efforts. His continued advocacy for the permanent funding of the 9/11 Victims Compensation Fund symbolized the passion and unwavering diligence that makes New York the greatest city in the world. Today’s honor will immortalize his efforts fighting for all of the 9/11 first responders while ensuring that his family knows how much he meant to this city and that he will never be forgotten.”