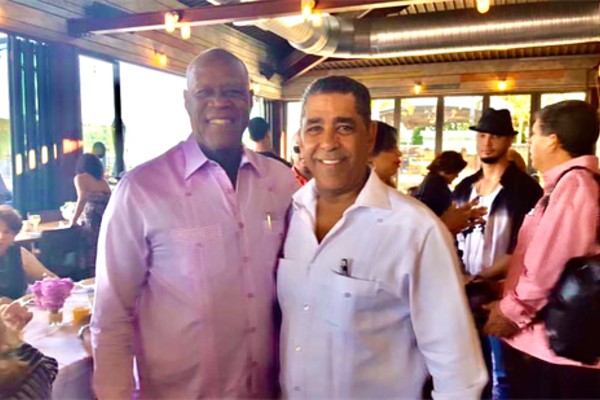 Rep. Adriano Espaillat spoke on the U.S. House floor to honor the life and legacy of the most prominent Merengue artist in the world, Johnny Ventura.

The following are remarks by Harlem Rep. Espaillat, as prepared for delivery:

“Madam Speaker, I rise today with a heavy heart to honor the life and work of the most prominent Merengue artist in the world who sadly passed away yesterday, the great Johnny Ventura.

“Johnny Ventura started his career in the 1960s with his Johnny Ventura and Combo Show. His career quickly flourished both nationally and internationally with his contagious music. He also embarked on a life of public service as a mayor in Santo Domingo and a member of Congress in the Dominican Republic. Just last February, we honored him here in Washington, D.C. as part of the yearly event Dominicans on the Hill.

“He prided himself in being the Ambassador of Merengue and as such of the Caribbean and the world. We will always remember him for contagious songs including “Yo soy el Merengue”, “Si vuelvo a nacer”, “El tabaco” y “Patacon Pisao”. El sonido de la tambora para hoy, el sonido del saxofón descansa, la güira también descansa hoy.

“We will always remember him for his great service to people and for his music and dedication to music. He will always be present in our hearts through his songs that often were funny and sometimes melancholic as he sang to the diaspora and as you know Madam Speaker, folks from all over the world find themselves in an economic exile and at times think of the family they left behind. They think of the wonderful beaches, river,s and mountains they left behind and they could only claim that feeling through the songs, like the songs Johnny Ventura often played for all of us. He had a contagious smile and a wonderful rhythm of music, with African-based instruments. Adiós Johnny Ventura, Adiós merenguero hasta la tambora, Adiós Caballo Mayor.

“Madam Speaker, I yield back.”