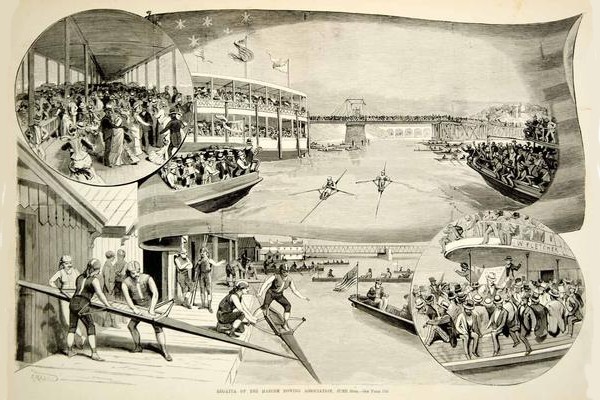 The New York Rowing Association (the “Association”) was founded by returning civil war veterans in Harlem.

The course was generally from McComb’s Dam Bridge to Gate’s lumber dock and was a 1-mile straight course.

“A. Montgomery rowed for the New York Athletic Club and was considered one of the largest members of the club.”

From The History of American Amateur Athletics and Aquatics by Frederick William Janssen (published in 1888?).

Jamieson has also contacted rowing historian Bill Miller of Friends of Rowing History, who had some more information about A.W. Montgomery and his medal.

Bill replies, “I have the July 3 New York Times article copied and attached. It reports the results of the race. It lists A.W. Montgomery racing in the Nassau four and winning.

The Nassau Club was one of the largest and well-established rowing clubs in America and much larger than the recently formed New York Athletic ‘Athletics’. I hope this helps zero in on AWM.

Photo credit: The Harlem Regatta Association on June 26, 1875. Via Source.