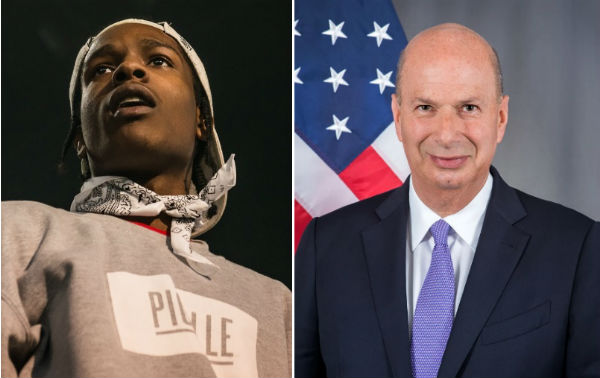 When you think of Harlem rapper A$AP Rocky, impeachment hearings probably don’t come to mind. And yet, Rocky, real name Rakim Mayers, was a surprise focal point of testimony made by US Ambassador to the European Union Gordon Sondland during the impeachment inquiry into President Donald Trump on Wednesday.

Sondland mentioned Rocky several times throughout his testimony, saying he and President Donald Trump had discussed the Harlem rapper during a July 26, 2019 phone call.

Rocky spent a month in a Swedish jail after he was detained in July over an altercation in Stockholm. Rolling Stone reported that “later that month, Kim Kardashian and Kanye West reached out to Trump to intervene. In August, A$AP Rocky was found guilty of assault In Sweden, but did not face additional jail time.”

He was found guilty of assault on August 14. He was released from custody on August 2 after President Donald Trump lobbied for his release, and was not ordered to return.

Time reported that “Trump had pressured Sweden’s Prime Minister to release A$AP Rocky on bail (despite the fact that Sweden has no bail system) after the rapper was detained and charged with assault in July after a street brawl in Stockholm. The rapper pleaded not guilty, claiming self-defense. He was convicted of assault but was not required to serve additional jail time. Trump later celebrated the rapper’s release in August, saying “get home ASAP A$AP!'”

Later in the testimony, when Democratic counsel Daniel Goldman asked why he had not mentioned the July 26 call in his initial closed-door testimony.

The phone call was mentioned by US diplomat David Holmes, who in closed-door testimony on Saturday said he heard Sondland tell Trump that he should let Rocky “get sentenced, play the racism card, and give him a ticker-tape when he comes home.”

Sondland said he had later remembered the call, thanks to the rapper being mentioned: “What triggered my memory was someone’s reference to A$AP Rocky.” He said the phone call mostly focused on Rocky being in jail, and not Ukraine military aid.

Throughout the testimony, Rocky was mentioned at least three more times, mostly in reference to the phone call.

Business Insider has contacted Rocky, his agent, and record label for comment.