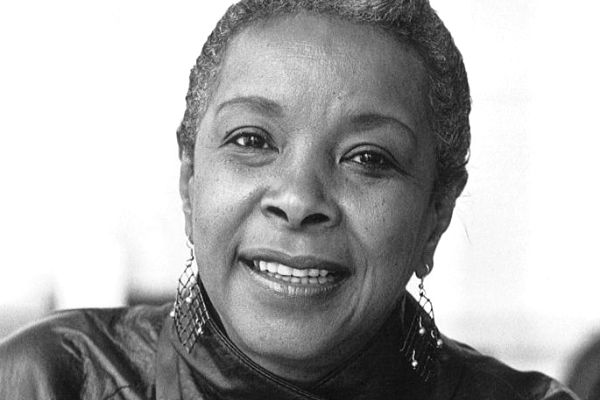 Rosa Cuthbert Guy, September 1, 1922 – June 3, 2012, was a Trinidad-born American writer who grew up in Harlem, New York. Her family had immigrated and she was orphaned when young. Raised in foster homes, she later was acclaimed for her books of fiction for adults and young people that stressed supportive relationships.

Guy lived and worked in New York City, where she was among the founders of the Harlem Writers Guild in 1950. It was highly influential in encouraging African-American writers to gain publication and had a high rate of success.

Rosa Cuthbert was born in 1922 in Diego Martin, on the Caribbean island of Trinidad. She and her younger sister Ameze were left with relatives when their parents Audrey and Henry Cuthbert emigrated in 1927 to the United States.

The children did not join their parents in Harlem, New York, until 1932. The following year their mother became ill, and Rosa and her sister were sent to Brooklyn to live with a cousin.

The cousin’s espousal of Garveyism and black nationalistic politics deeply affected Rosa. After their mother’s death in 1934, the two girls returned to Harlem to live with their father, who remarried.

When their father died in 1937, the orphaned girls were taken into the welfare system and lived in foster homes. Rosa left school at the age of 14 and took a job in a garment factory to support herself and her sister.

In 1941, at the age of 19, Rosa met and married Warner Guy. While her husband was serving in the Second World War, she continued working in the factory. A co-worker introduced her to the American Negro Theatre

, where she studied acting; other graduates included Harry Belafonte and Sidney Poitier. In 1942, her son Warren Guy, Jr, was born.

After the war, Rosa Guy moved to Connecticut with her husband and son. Five years later she and her husband divorced, and she returned to New York City.

In 1950, along with novelist John Oliver Killens, Rosa Guy formed a workshop that was to become the Harlem Writers Guild (HWG). Its goal was “to develop and aid in the publication of works by writers of the African Diaspora”. Its members and participants included Willard Moore, Walter Christmas, Maya Angelou, Dr. John Henrik Clarke, Paule Marshall, Audre Lorde, Alice Childress, Ossie Davis, Ruby Dee, and Douglas Turner Ward. The Guild was very influential, nurturing more than half of all successful African-American writers between 1950 and 1971; they were associated with the workshop. Guy also belonged to On Guard for Freedom, a Black nationalist literary organization founded by Calvin Hicks on the Lower East Side of New York City. Other members included LeRoi Jones, Sarah E. Wright, and Harold Cruse. On Guard was active in the political realm, supporting Congolese liberation leader Patrice Lumumba and protesting the United States-sponsored Bay of Pigs invasion at Cuba.

In 1954, Rosa Guy wrote and performed in her first play, Venetian Blinds, which was successfully produced Off-Broadway at the Tropical Theater.

Two stories by her, “Magnify” and “Carnival”, appeared in the Trinidad Nation newspaper in 1965. The following year her first novel, Bird at My Window

, was published. Maya Angelou commented on this novel and said:

“This book was welcomed when it was first published in 1966. Its brave examination of a loving, yet painful, relationship between a Black mother and her son is even more important today. Rosa Guy is a fine writer and she continuously gives us new issues to contemplate. Welcome Bird at My Window.”

Most of Guy’s books are about the dependability of family members and friends who care and love each other. Her trilogy of novels for young people — The Friends, Ruby, and Edith Jackson — is based on her own personal experiences, as well as those of many young African Americans growing up in New York City with little or no money or support from family. Ruby, published in 1976, tells the story of a young girl seeking love and friendship, who finds it in Daphne Duprey, allowing both girls a new insight of relationships and love.

, has been described as a Caribbean re-telling of Hans Christian Andersen’s “The Little Mermaid

” “with a dash of Shakespeare’s Romeo and Juliet.” In the tale, Desiree is a beautiful peasant who falls in love with a handsome upper-class boy whom she saved in an accident. His family does not approve of Desiree, for she is too black and too poor for their son who will be king. Concepts of sacrifice and pure love reign throughout the novel. It was adapted for the Broadway musical, Once on This Island

by Lynn Ahrens and Stephen Flaherty. The show’s original cast ran for a year, from 1990 to 1991, and was then revived in December 2017 at Circle in the Square Theater. It won the 2018 Tony Award for Best Revival of a Musical and ran until January 6, 2019.

Rosa Guy died of cancer in 2012 at her home on the Upper West Side of Manhattan, aged 89. Her obituary was included in The Socialite Who Killed a Nazi with Her Bare Hands: And 144 Other Fascinating People who Died this Year, a collection of New York Times obituaries published in 2012.