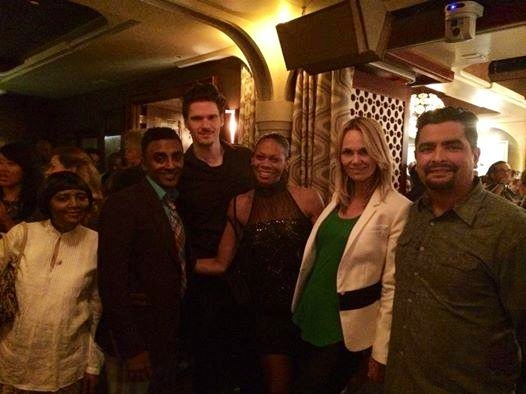 What does community mean to you?

A true sense of community is more than borrowing a cup of sugar, saying hello or holding the door, it’s going the extra mile in a time of need. For East Harlemites who are still reeling from the tragedy of the East Harlem explosion at 116th St./Park Ave on March 12, the community is pulling together to raise funds for displaced families and individuals, making sure their voices are heard well beyond the quadrants of their block.

Samuelsson, who lives in East Harlem and is the chef/owner of the very popular Red Rooster/Ginny’s Supper Club, heard the loud sounds that morning, but didn’t realize the gravity of the situation until he checked the news online and read comments on social media.

With a staff of 150 people, which includes many employees from the Latino community in East Harlem, Samuelsson knew that he had to do something to help.

“I was like we can’t be this big restaurant and not do our part,” he told Latin Post. “I didn’t know what we would be able to bring, but I knew we would have to bring something. I didn’t have a number in mind, but I knew the right accomplices to do something.”

Samuelsson reached out to the American Red Cross for help. “They said we don’t have an East Harlem chapter yet, but we’re going to get one,” he explained. “And in just two days, it opened one.” It turns the celeb chef was just the mover and shaker that East Harlem needed.

With his star power and famous friends, Samuelsson took to social media to corral fellow celebrity chefs, banker friends and local eateries to get the word out about the Harlem Helps benefit.

“We are a diverse city — this is what you can do when you are a diverse city. I come from a very simple background; I come from a shack in Africa. So, I have been on the other end of getting help and now I’m on this end where I can give help. When you go the elevator all the way, you have to do that, not just because there’s a camera there, but you have to do it because it’s just the right thing to do,” he said.

“It was the ultimate teamwork,” Samuelsson said of the “humble” cooks, waiters and people at the American Red Cross. “People came together and wanted to help out. For two weeks, everybody pushed every day.”

According to celebrity chef Aarón Sánchez, the event, which featured live entertainment from the National National Jazz Museum of Harlem All-Stars, raised $55,000. (The ticket proceeds will go directly to the survivors of the collapse via American Red Cross in Greater NY: East Harlem Collapse Relief to aid the families with daily necessities and resources for recovery.)

Samuelsson recognizes how important it is to pay it forward — he comes from a humble beginning and has an amazing story himself. Born in Ethopia, he, his sister and mother contracted tuberculosis and sadly his mother died from the disease. Samuelsson and his sister, Linda were adopted by a loving Swedish couple who raised them in Sweden, where his adopted grandmother, Helga, inspired him to cook.

Samuelsson studied at the Culinary Institute in Gothenburg, Sweden and apprenticed in Switzerland and France at some of the best eateries. He received a 3-star rating from the New York Times while Executive Chef of Aquavit at the age of 23, thus making him the youngest chef to ever so do at the time. He reconnected with his father and 18 brothers and sisters in Ethiopia and returned to New York City, inspired by both Swedish and African cuisine. In 2009, he cooked the first State Dinner for President Barack Obama for the Prime Minister of India. After 9/11, his perspective on cooking and community changed for him. He also found love and got married to an Ethiopian model, Gate Maya Haile. In 2010, he opened the Red Rooster and in 2012, he opened Ginny’s Supper Club.

Sánchez, who is the co-star of the Food Network’s hit series Chopped and the chef/owner of Kansas City’s Mestizo, also comes from humble beginnings, plus he has East Harlem roots.

“For me it was an opportunity, most importantly to help these people out and to help the neighborhood, and to also support Marcus,” Sánchez told Latin Post.

The Mexican-American celebrity chef went to junior high school on 107th and Columbus and played basketball on 116th and Second Avenue.

“Yes, the tragedy has affected a lot of the community and left these people displaced, but it’s robbed them of their sense of security,” Sánchez explained. “When you’re home, that’s supposed to be your sanctuary, but now these people are forever second-guessing whether or not the gas is on and if it’s safe for them — that is something that they’re going to have to deal with. It was traumatic for them.”

Growing up, Sánchez learned from the best in his own kitchen as the son of celebrated Mexican chef Zarela Martinez. The culinary world has evolved a lot since then, bringing more Latinos to the culinary forefront. Today, Sánchez has become one of the country’s top contemporary Latin chefs.

He is also the Chef Ambassador of WhyHunger, which helps inner-city kids build sustainable gardens and teaches them the origin of the ingredients. Sánchez says this community service “has been very rewarding.”

He also paid tribute to his urban and Mexican roots through his first book, La Comida del Barrio, (2003), as well as his second book, Simple Food, Big Flavor: Unforgettable Mexican-Inspired Recipes from My Kitchen to Yours (2011).

“It’s all about the food for inner-city Latin neighborhoods — because that is who I am,” he said.

With the caliber of the talent at the Harlem Helps benefit — both Samuelsson and Sánchez have been guest chefs at the White House — there was no way the food wasn’t going to be top-notch. Food was served from Barbuto as well as several Harlem restaurants, cocktails from 67 Orange, and there was a live auction featuring prizes such as VIP tickets to Amateur Night at the Apollo, a stay in a suite at the Smyth TriBeCa (https://gripup.com/learn/photogenic-locations-across-the-world/#tribeca), and tickets to opening night of The Maids, featuring Cate Blanchett.

“I thought last night (April 2) was a great way to raise money for something that was so tragic. They organized a fun event that was still rooted in why we were there,” Ayo Haynes, assistant secretary for Community Board 11 (East Harlem where the explosion happened) and the vice chairperson of the Land Use Committee, told Latin Post.

“Today, it is sad that it had to take an accident like that, but we also saw the best and the worst,” Samuelsson added. “The worst in the accident and also the best where people want to come together and help out — that’s the spirit.”

When Melba Wilson (owner of Melba’s Restaurant) started speaking, “she spoke from church, so the spirituality was there. Harlem is a community that has gone through a lot. I think she (Wilson) put it beautifully when she said that ‘this not going to define us.'”

In the aftermath of the explosion, some longtime Harlem residents have noticed somewhat of a change where their voices are finally being heard regarding building concerns within their co-ops.

“I think Red Rooster is amazing for doing this kind of event because it brings more awareness to issues that happen in Harlem all the time … and nobody pays attention to,” said a longtime Harlem resident Jacquelyn Levy, who invested in an East Harlem neighborhood co-op seven years ago.

“Harlem is amazing. It’s an amazing culture,” she added. “People here are so good to each other and look out for each other.  It’s a neighborhood community, which feels nice” (source).