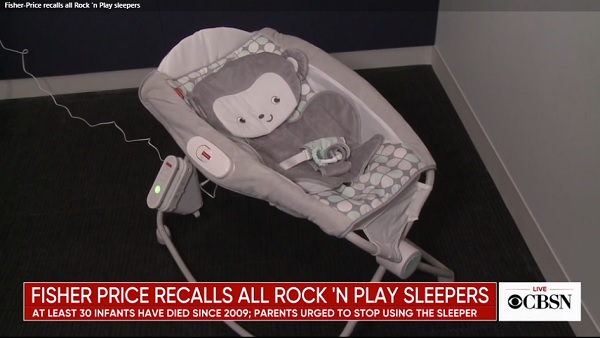 The Consumer Product Safety Commission (CPSC) is proposing a new rule that would virtually eliminate the sale of inclined sleepers, an infant bed that allows babies to sleep at a 30-degree angle.

The American Academy of Pediatrics emphatically states that babies should sleep on flat surfaces, and now there’s mounting evidence that these inverted sleepers can be deadly.

Erin Mannen, assistant professor of orthopedic surgery at the University of Arkansas for Medical Sciences, led the study and found that the design of the inclined sleeper is not safe.

Mannen says the risk is from suffocation. The researchers found that the inclined sleeper makes it easier for an infant to roll into a facedown position. If they lack the strength to roll over again they can suffocate.

Same standard as for bassinets

Mannen concluded that none of the inclined sleep products tested in the study were safe for infants. U.S. PIRG concurs, saying the product is inherently unsafe. The group says new CPSC rules would require future sleepers to meet the same standards used for bassinets

“We have lost too many infant lives because dangerously inclined sleepers continued to be sold, despite the clear evidence they posed a real threat to infants’ lives,” said Grace Brombach, U.S. PIRG Consumer watchdog associate. “We applaud the U.S. Consumer Product Safety Commission for taking bold action to end the sale of inclined sleepers and urge them to adopt the rule quickly.”

In July, Fisher-Price recalled 71,000 inclined sleeper accessories included with all models of Fisher-Price Ultra-Lite Day & Night Play Yards. At the time, the company said infant fatalities had been reported while using other inclined sleep products after the infants rolled from their back to their stomach or side while unrestrained or under other circumstances.

Inclined sleepers are designed to position babies to sleep on an incline of between 10 and 30 degrees. However, the American Academy of Pediatrics has long warned that these products make it more likely that a child’s airway will become compressed, causing them to suffocate.

As of October 4, the CPSC said it had received reports that 54 infant deaths had been linked to inclined sleep products reports our source.

Screenshot from CBS report via source.