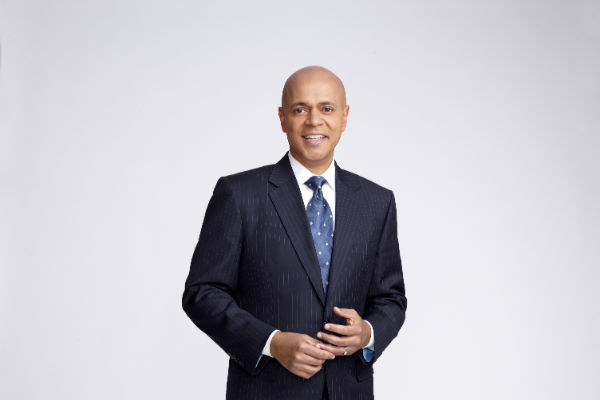 Recognizing David Ushery’s commitment to broadcast excellence, passion for community service, and his work as a positive role model for New York’s youth.

The New York State Broadcasters Hall of Fame has selected NBC 4 New York / WNBC news anchor Ushery’s for its 2020 Induction Class. One of the most recognized and respected news anchors in the Tri-State region, Ushery joins fellow anchor Chuck Scarborough, Chief Meteorologist Janice Huff and the late Senior Correspondent Gabe Pressman as members of the Hall of Fame.

“David is a gifted writer and anchor and one of the most respected and accomplished journalists in our newsroom and beyond. He is a big believer in giving back and making a difference. This is a well-deserved honor and we look forward to David joining the legends of New York broadcasting,” said Eric Lerner, President and General Manager of NBC 4 New York.

Ushery anchors the 11 am and 5 pm editions of “News 4 New York”. He also hosts “The Debrief Podcast”, taking listeners behind the headlines and interviewing the men and women who bring the news to their viewers. A member of the Silver Circle for the National Academy of Television Arts & Sciences, New York Chapter, Ushery was honored with a National Emmy® and an Edward R. Murrow Award for WNBC’s continuing team coverage of Hurricane Sandy in 2012.

Passionate about service and helping those in need, Ushery has brought attention to the sacrifice and unique challenges facing local first responders. He has investigated the high rates of suicide among firefighters and placed an important spotlight on the emotional struggles faced throughout their lifetimes. He also won a New York Emmy® for his 2019 profile on 9/11 responder Michael Dorian, who was diagnosed with cancer following his service and later fought a challenging battle to secure the health benefits due to him under the law. Later that year, he conducted one of the last televised interviews with the late NYPD Detective Luis Alvarez, who helped lead the grassroots campaign which resulted in renewal of the federal Victim’s Compensation Fund.

“It takes two incredible teams to tell the stories most important to our community. It begins with my work family at WNBC, where I work side-by-side with the best in the business. But most importantly, its anchored by – and ends with the home team, my wife and son. Entering the New York State Broadcasters Hall of Fame would never have happened without their love and support. I am grateful,” said Ushery.

For more than 17 years, Ushery has offered WNBC viewers a front row seat to the biggest news stories of the day. He has traveled around the world to report live from the site of terror attacks in Paris and Manchester, England, the front lines in Gaza and the West Bank, and the opening of the United States Embassy in Jerusalem. He has also made multiple visits to St. Peter’s Square in Rome where he covered the resignation of Pope Benedict XVI, the 2013 papal conclave electing Pope Francis and the canonizations of Pope Saint John Paul II and Pope Saint John XXIII.

In recent years, Ushery also reported from Houston following the death of former President George H.W. Bush, from Orlando following the deadly Pulse nightclub shooting and the White House for the transition between the outgoing Obama and incoming Trump teams. He covered Pope Francis’ 2015 visit to Washington D.C. and New York City live from the parade routes. Ushery also delivered live coverage following the 2012 Sandy Hook elementary school shooting and the miraculous 2009 landing of US Airways Flight 1549 in the Hudson River.

“We are honored to induct David Ushery into the New York State Broadcasters Hall of Fame. He exemplifies the very best in broadcasting. An Emmy Award-winning newscaster and anchor, David has covered the most important issues of our time for nearly three decades. His commitment to New York is unsurpassed. We are fortunate to have him in our Hall of Fame,” said David Donovan, President of the New York State Broadcaster Association.

Prior to joining WNBC in 2003, Ushery worked for 10 years at WABC-TV where he rose from general assignment reporter to full-time anchor of the early morning and noon broadcasts and later became the primary fill-in anchor for the evening newscasts. While here, Ushery covered the shooting death of Amadou Diallo, the 9/11 terrorist attacks in New York. He also covered the Space Shuttle Columbia disaster from Houston, the O.J. Simpson trial from Los Angeles and the disappearance of Elizabeth Smart from Utah. Ushery also made multiple trips to Haiti for a series of reports on the island’s political and economic unrest, travelled to Africa and Toronto for visits by Pope John Paul II, and reported from South Africa where he covered the United Nations’ conference on racism.

He is actively involved with both the New York Urban League and the Archdiocese of New York, and received numerous awards for community service, including from the Nubian Cultural Center, Consulate of Israel and Public Relations Society of America. He has received the McDonald’s Black Media Legends: Faces of Black History Award and the National Association of Black Journalists Award for his series of reports on children and violence. Ushery has also been named “40 under 40” from Network Journal and Black Professionals Business Magazine.

Ushery is the recipient of three honorary degrees, earning honors from St. John’s University (2014), St. Francis College (2018) and Fordham University (2019). He is actively involved with both the New York Urban League and the Archdiocese of New York, and received numerous awards for community service, including from the Nubian Cultural Center, Consulate of Israel and Public Relations Society of America. He has received the McDonald’s Black Media Legends: Faces of Black History Award and the National Association of Black Journalists Award for his series of reports on children and violence. Ushery has also been named “40 under 40” from Network Journal and Black Professionals Business Magazine.

A Hartford-area native, Ushery graduated from the University of Connecticut and began his broadcast career at WFSB-TV, where he worked as the lead evening reporter. He also reported for the Hartford Courant and the Los Angeles Times. Ushery was 11 years old when he was selected from a search to host the Connecticut edition of “Kidsworld”, a nationally syndicated television show. One of his first interviews was with news icon Walter Cronkite, who was considered one of the most trusted men in America at the time. Ushery hosted “Kidsworld” until he was 18.

NBC 4 New York / WNBC is the flagship station of the NBC Owned Television Stations division of NBCUniversal, serving the New York Tri-State area with an unparalleled commitment to broadcast excellence for more than 75 years.

The station features New York’s largest investigative reporting team, the I-Team and includes Edward R. Murrow and Emmy Award-winning journalists who successfully track down the answers to the questions most important to viewers. Storm Team 4, the station’s trusted weather team, utilizes the most accurate and the most powerful weather technology available to keep Tri-State viewers informed and safe when severe weather strikes. This includes StormTracker 4, the only commercial high-frequency S-Band dual polarization fixed Doppler weather radar operating in the Northeast.