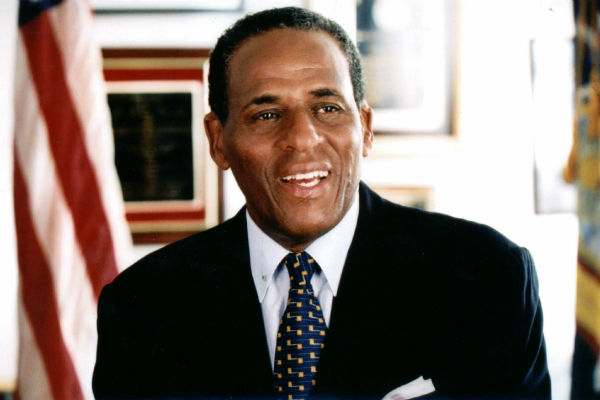 The Honorable H. Carl McCall, former New York State Comptroller and most recently the Chairman of the State University of New York Board of Trustees.Mr. McCall will serve as the Hunter College Roosevelt House Leader in Residence for the 2019-2020 academic year. The announcement was made today by Jennifer J. Raab, President of Hunter College.

McCall stepped down as Chairman of the SUNY Board of Trustees this past spring, has been a member of that board since October 2007. McCall served as New York State Comptroller from May 1993 to December 2002. He was the first African-American elected to statewide office in New York State and, later, the first African-American candidate for governor.

“We are honored to welcome Carl McCall to the Hunter College family,” said President Raab. “He has served New York City and New York State as a distinguished public servant for decades. His wealth of knowledge will be a huge benefit to our entire Hunter community, adding to our Roosevelt House programs and public policy courses. This is a tremendous opportunity for our students to learn from his vast expertise.”

“I’m looking forward to the opportunity to engage with the incredible students and faculty of Hunter College,” McCall said. “I hope to learn from them.”

“It’s a pleasure and an honor to welcome to Roosevelt House a leader I’ve been privileged to know and respect for more than 40 years,” said Harold Holzer, Jonathan F. Fanton Director of Roosevelt House. “Carl exemplifies the traditions we reflect at Roosevelt House: FDR’s commitment to public service and public policy, and Eleanor’s decisive impact on the field of human rights. How perfect to have a Leader in Residence who has served as a member of both the executive and legislative branches making and enforcing policy, and as a human rights commissioner protecting all citizens.”

As part of the new program McCall will lead in its first year, he will explore the notion of leadership for students, sharing lessons learned and demonstrating through example key aspects of leadership. He will interact with students and faculty as a guest lecturer in various public policy classes and meet with student organizations. He will also participate in events at the Roosevelt House, including panel discussions, conferences, and seminars. In addition, McCall will teach in the Urban Affairs Master’s Program in the spring semester.

McCall has long been a passionate advocate for public education. Prior to his years on the SUNY Board of Trustees, he was President of the New York City Board of Education from 1991 to 1993, and Chairman of the Public Higher Education Conference Board, a coalition of 14 member organizations that support a strong and vibrant public higher education system in New York State.

McCall has also been active in the private sector; he served as a Vice President of Citibank and as Corporate Director of the New York Stock Exchange, Tyco International, New Plan Realty Corporation, and Ariel Investment. He was educated at Dartmouth College, Andover Newton Theological Seminary, and the University of Edinburgh. He is the recipient of nine honorary degrees.

Hunter College, located in the heart of Manhattan, is the largest college in the City University of New York (CUNY) system. Founded in 1870, it is also one of the oldest public colleges in the country and famous for the diversity of its student body, which is as diverse as New York City itself. Most Hunter students are the first in their families to attend college, and many go on to top professional and graduate programs, winning Fulbright scholarships, Mellon fellowships, National Institutes of Health grants, and other competitive honors. More than 23,000 students currently attend Hunter, pursuing undergraduate and graduate degrees in more than 170 areas of study. The 1,700 full- and part-time members of Hunter’s faculty are unparalleled. They receive prestigious national grants, contribute to the world’s leading academic journals, and play major roles in cutting-edge research. They are fighting cancer, formulating public policy, expanding our culture, enhancing technology, and more. https://hunter.cuny.edu/