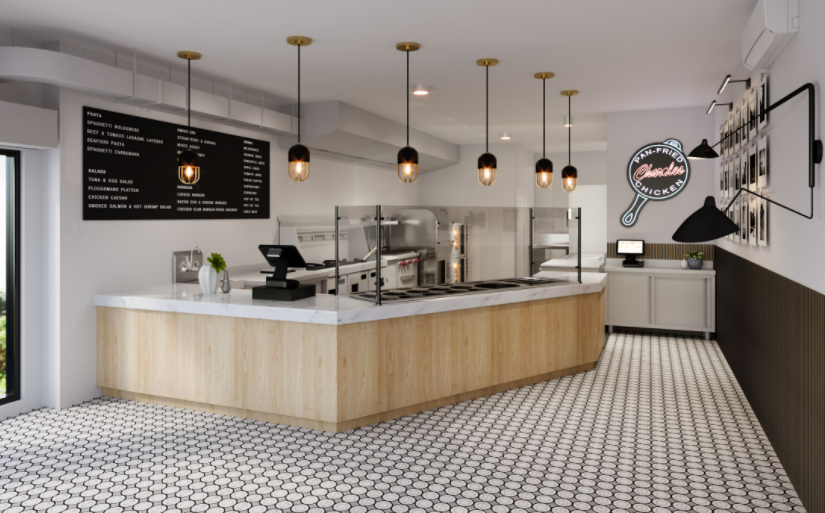 The new space, expected to open this summer, will be the restaurant’s largest location to date, in addition to a 555-square-foot cellar for food storage.

Charles Pan-Fried Chicken, a restaurant founded more than 30 years ago by Charles Gabriel, has become a Harlem favorite, known for its authentic Southern cuisine at affordable prices.

Charles Pan-Fried Chicken, a restaurant founded more than 30 years ago by Charles Gabriel, has become a Harlem favorite, known for its authentic Southern cuisine at affordable prices.

While the pan-fried chicken has become the stuff of legend, popular dishes also include smothered pork chops, turkey wings, chicken and waffles, collard greens, yams, black-eyed peas, and a mixture of okra, tomatoes, and corn.

“We are excited to welcome beloved New York City institution Charles Pan-Fried Chicken to a brand-new space in the heart of a historic Harlem neighborhood,” said Joseph Milone, Director of Retail at L+M Development Partners. “His old-school skillet-fried chicken has drawn long lines for years and this new space will bring the iconic soul food to even more New Yorkers.”

The bigger space will allow the restaurant to offer more pickup and delivery options, enabling it to serve as part of families’ regular meal planning throughout the week.

And even though the James Beard-nominated restaurant is expanding, its classic menu will remain the same, and Gabriel and his team are firmly committed to continuing their home-cooking approach that customers have come to know and love.

In fact, Gabriel has worked to grow and expand his business throughout its 40-year history; he started cooking at a table in the park, before opening a food truck and then a restaurant on 151st Street in 1984, later moving to 2461 Frederick Douglass Boulevard at 132nd Street.

L+M undertook a major renovation of the 340 W 145th site, replacing the dilapidated façade with a floor-to-ceiling storefront system ideal for attracting foot traffic and enhancing visibility along the 145th Street corridor.

The L+M team also made electrical service upgrades and installed energy-efficient HVAC units to prepare the space for a modern dining tenant.

Studio Parallel Arch+Design, a Brooklyn-based full-service architecture, and design firm was brought on to design the restaurant concept that blends Charles’s home cooking style with a streamlined takeout and delivery service.

The new space will feature a large kitchen, an ordering counter, and indoor seating, along with the option for outdoor dining.

The restaurant is conveniently located in the historic Sugar Hill district in Harlem next to Jackie Robinson Park, a mere block from the A/C and B/D trains at 145th Street and a quick walk to the 1 and 3 trains, as well as multiple bus routes.

One of 12 brothers and eight sisters born and raised in Charlotte, North Carolina, Gabriel grew up cooking fried chicken, biscuits, rice, and gravy with his family.

One of 12 brothers and eight sisters born and raised in Charlotte, North Carolina, Gabriel grew up cooking fried chicken, biscuits, rice, and gravy with his family.

Upon moving to New York in 1965 at 20 years old, Gabriel has been bringing this southern-style cooking to New Yorkers ever since.

Since its inception in 1984, L+M Development Partners Inc. has been an innovator in developing quality affordable, mixed-income, and market-rate housing, while improving the neighborhoods in which it works.

A full-service firm, L+M works from conception to completion, handling development, investment, construction, and management with creativity that leads the industry.

Community leaders, government officials, and institutional investors turn to L+M because of its consistent track record of excellence.

L+M is a double bottom line company, where its success is measured not only in financial returns but also by positive impacts.

L+M takes pride in its long-standing partnership with the communities it serves, demonstrated through an annual scholarship fund, workforce development programs, after-school programs, and substantial support for local nonprofits.