Harlem Electeds And Others At Co-Naming Ceremony For Dr. Nasry Michelen 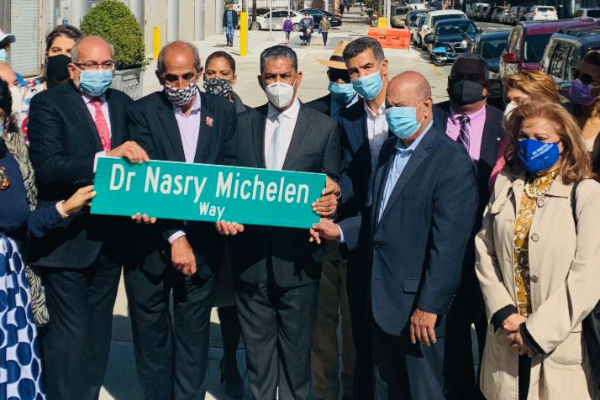 This was to honor the life and legacy of Dr. Nasry Michelen.

Dr. Nasry Michelen was born in San Juan de la Maguana, Dominican Republic into a distinguished family. He received his initial schooling in the Dominican Republic but obtained his medical degree at the American University of Beirut in Lebanon. He married Ms. Marie Armaly and established a practice as a surgeon in Bethlehem, Palestine.

He returned to his native country a few years later, where he practiced in San Juan’s public hospital system. His administrative skills and acumen won him recognition from the Minister of Health, who awarded him a scholarship to obtain his Master’s in Public Health at Columbia University, New York City. Upon his return from studying, he was appointed Superintendent of Hospitals during President Trujillo’s dictatorship.

Dr. Michelen was a fierce critic of the Trujillo regime and rose as a leader of the opposition to the new government formed after Trujillo’s death. The government’s persecution was such that he was forced to leave the country along with his family, which by now comprised of his wife and three sons.

As Executive Director of Lincoln Hospital, Dr. Michelen recruited a cadre of Latino physicians to the medical staff in an effort to provide culturally appropriate care and better serve the predominantly Latino population of the South Bronx. He successfully advocated for the building of a new Lincoln Hospital at 149th St. and Grand Concourse. He also formed part of a group of community activists that fought for better services in the South Bronx.

In 1968, Dr. Michelen became a founding member of Hostos Community College of CUNY and served as its first President. Hostos’ focus was to train a cadre of healthcare para-professionals to serve the South Bronx and other underserved areas. His dream was that one day Hostos would become a medical school. 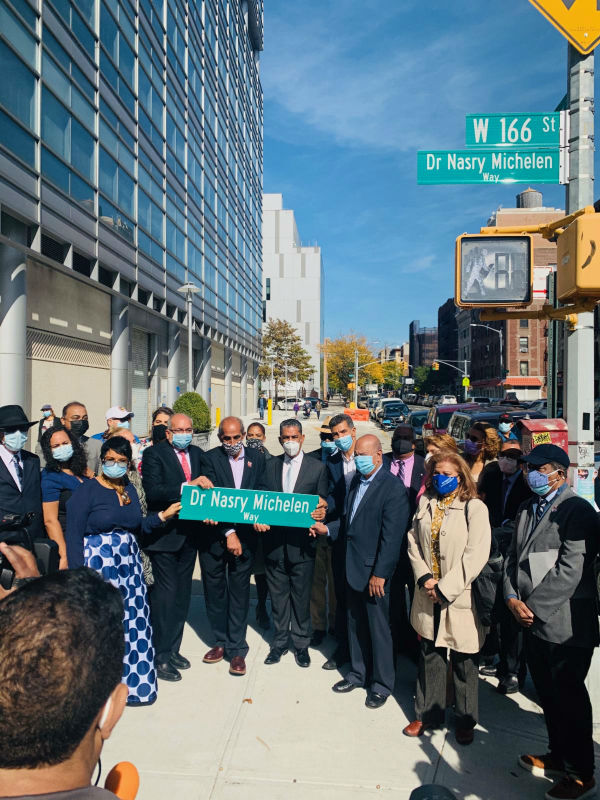 Dr. Michelen presided as Executive Director of the Regional Medical Program in Delaware, as Director of the Division of Hospital Accreditation of the New York State Department of Health, and as Professor at Mt. Sinai School of Medicine.

During his tenure, he made it a priority to strongly advocate for patients. He was responsible, among other achievements, for helping establish the Department of Health’s requirement that all hospitals post the Patient’s Bill of Rights in a visible location.

Dr. Michelen founded and led numerous Dominican organizations, including the Dominican Medical Society in New York, where he also served as President, Asociaciones Dominicanas, and Alianza Dominicana, among others. He was one of the founding members and the first Grand Marshall of the Dominican Day Parade.

He was most proud of his three sons, seven grandsons, and four great-grandchildren, who carry on his tradition. His beloved wife passed away in 2016.

“Today we honored the life and legacy of Dr. Nasry Michelen. A community and health justice advocate who stood for what was right and who dedicated his life to ensure underserved communities received the resources and the respect they deserved,” said Council Member Ydanis Rodriguez. “Dr. Nasry was the first Latino and Dominican to become a Hospital Director in the State of New York. I am proud to stand alongside Dr. Nasry Michelen’s family, friends, and local elected officials as we honor all of the contributions made by Dr. Nasry Michelen.”

“Dr. Nasry Michelen was a visionary medical professional, an inspirational community leader, and man of incredible integrity and compassion whose impact has been instilled throughout our community and greater New York City,” said Representative Adriano Espaillat (NY-13). “As the first President of Eugenio María de Hostos Community College, a Professor of Medicine, a Director for New York’s Department of Health, and a leader for countless Dominican organizations, Dr. Michelen was a trailblazer who led the way for social and health care justice for generations of Dominicans. Today, we honor Dr. Michelen’s legacy of community activism and his endless fight for educational opportunities and healthcare services both in the South Bronx and throughout New York City.”

Cira Angeles, Chairman of the Foundation Board said, “We thank Council Member Ydanis Rodriguez and the members of the Dr. Nasry Michelen Foundation for honoring Street Co-Naming of W166 and Audubon “Dr. Nasry Michelen Way” that will preserve and elevate the legacy of Dr. Nasry Michelen. As Dr. Nasry once said: “You are part of something, you are not alone. That is why you have to help others if you can”

Dr. Rafael A. Lantigua, Professor of Medicine at Columbia University Medical Center said, “Today with honored a trailblazer, mentor, pioneer, who dedicated his knowledge in public health to improve the quality of life of underserved communities on the fields of education and health; by dedicating this street in recognition of his achievements, future generations will be able to learn how his vision during the XX Century contributed to our wellbeing.”