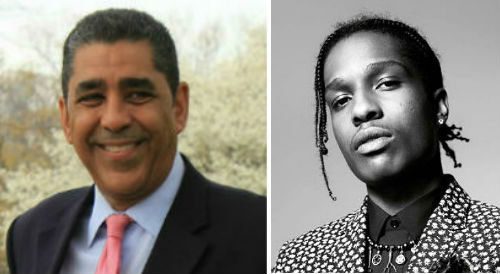 Espaillat demanded that Rocky, who was born Rakim Mayers, be released without charges for the July 2 fight that involved him, his security and two Swedish men, according to a letter sent to the Swedish Embassy in Washington D.C. The congressman said videos of the altercation show that Rocky and his group were acting in self-defense reports Patch.

Espaillat also claimed that Sweden had violated the entertainer’s rights by denying him access to United States Consular Services and holding him in “inhumane detention conditions” with little access to “adequate food, clean water, or appropriate sleeping arrangements.”

“A$AP, a native of Harlem, N.Y., one of the communities I represent in the United States House of Representatives, is beloved universally for his role as a trailblazer in the music and fashion industries,” Espaillat writes in his letter to Swedish Ambassador Karin Olofsdotter. “Touching on issues like incarceration, racism, and drug addiction, A$AP serves as an inspiration and role model for many American teens.”

Rocky and three other men were arrested after turning themselves into Swedish authorities on July 3. The Swedish Prosecution Authority announced the men were facing aggravated assault charges.

Video of the brawl shows Rocky and his security punching a downed man on a street in Stockholm, but the entertainer claims that he and his group were acting in self-defense. Rocky released videos on his personal Instagram account that he claims shows the lead up to the fight. In captions to the two videos, Rocky claims the two men are drug addicts who followed his group for four blocks, were harassing women on the street and attacked his bodyguard with a pair of headphones.

In one of the videos, Rocky appears to play peacemaker. The rapper puts his hands on one of the man’s shoulders and says “we don’t want to fight y’all.”

Rocky’s arrest has drawn widespread criticism from the music industry and the artist’s fans. More than 500,000 people have signed a Change.org petition to have Rocky freed from detention and a number of high-profile entertainers such as Tyler, The Creator and Schoolboy Q have announced they will no longer tour in Sweden.

Espaillat’s letter warns that continued detention of the Harlem artist could result in the tarnishing of Sweden’s tourism industry. The lawmaker also said that Rocky’s detention has caused him to cancel performances, “costing various individuals millions of dollars.”

Read the full letter below:

Espaillat Letter to Swedish… by on Scribd