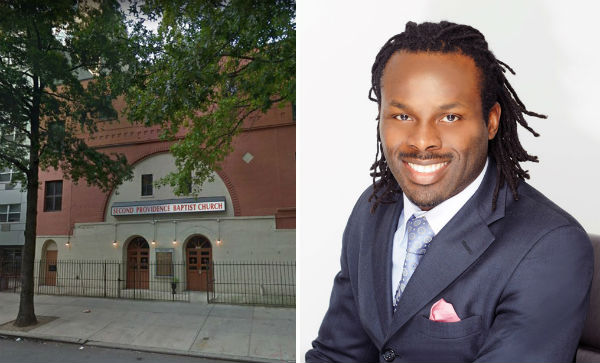 Law.com reports that a Manhattan lawyer has resigned from the bar and admitted that he can’t “defend himself” against professional-misconduct allegations that say he stole $600,000 from a Harlem church he was representing.

The lawyer, John Omololu Shasanmi, has also agreed before an Appellate Division, First Department panel to pay restitution of $601,874.99 to the church and reimburse the Lawyers’ Fund for Client Protection for any awards made to the church in connection with its loss caused by Shasanmi’s misconduct, according to a panel decision granting Shasanmi’s resignation motion.

At the same time, Shasanmi is under criminal indictment by the Manhattan District Attorney’s Office based on what appear to be the same allegations: stealing $600,000 from the Second Providence Baptist Church through misappropriating for his own use deposited escrow funds connected to a real estate transaction.

It is unclear whether Shasanmi’s admission cited by the First Department that “he cannot successfully defend himself against these allegations” in the attorney-discipline matter indicates any intention to admit guilt in the criminal case. His attorney, Andre Travieso, reached by phone on Friday, a day after the panel issued its Nov. 15 decision, declined to comment when asked both about Shasanmi’s admission of being unable to defend himself and about his client’s decision to resign from the bar.

Asked about Manhattan DA Cyrus Vance Jr.’s criminal case against his client, Travieso said that Shasanmi “hasn’t pleaded guilty yet on anything.” He added that the “criminal [case] is still fluid.”

Travieso, of Travieso Law in Manhattan, also said, when asked about any possible forthcoming plea by his client, that Shasanmi does not intend to plead guilty at this time.

The Manhattan DA’s Office declined to comment after being emailed questions about the potential impact of Shasanmi’s statements—made in an affidavit cited by the First Department—regarding his misconduct as an attorney. The questions to the DA included how the office views what is stated in the First Department’s decision and whether information in the decision amounts to evidence to be used in the criminal case.

The Second Providence Baptist Church did not return a call seeking comment.

In July, the DA’s Office announced that Shasanmi had been charged with two counts of second-degree grand larceny and one count of third-degree criminal possession of a forged instrument in relation to his handling of escrow funds that were to go to the church.

The office said that Second Providence Baptist had retained Shasanmi to represent it and act as an escrow agent in a real-estate transaction with Azimuth Development Group. In December 2014, Shasanmi allegedly received a $250,000 deposit that he was supposed to hold in escrow and which would later be paid to Second Providence if the deal, which involved the church allowing Azimuth Development to erect a residential building on its West 116th Street property, closed. By April 23, 2015, Shasanmi had misappropriated nearly all of the funds for his own use, according to Manhattan prosecutors.

After the deal closed in April 2017, he received an additional $350,000 to be held in escrow, the prosecutors said. But Shasanmi held the money in his personal bank account rather than in an escrow account and again misappropriated the funds for his personal use, according to the DA’s Office. The prosecutors further alleged that by Nov. 21, 2017, only $100 of the funds due to the church remained.

Photo credit: Lawyer John Omololu Shasanmi has said he can’t “defend himself” against attorney-misconduct allegations that he misappropriated escrow funds being held for the Second Providence Baptist Church in Harlem, which he was representing. Courtesy photo Law.com