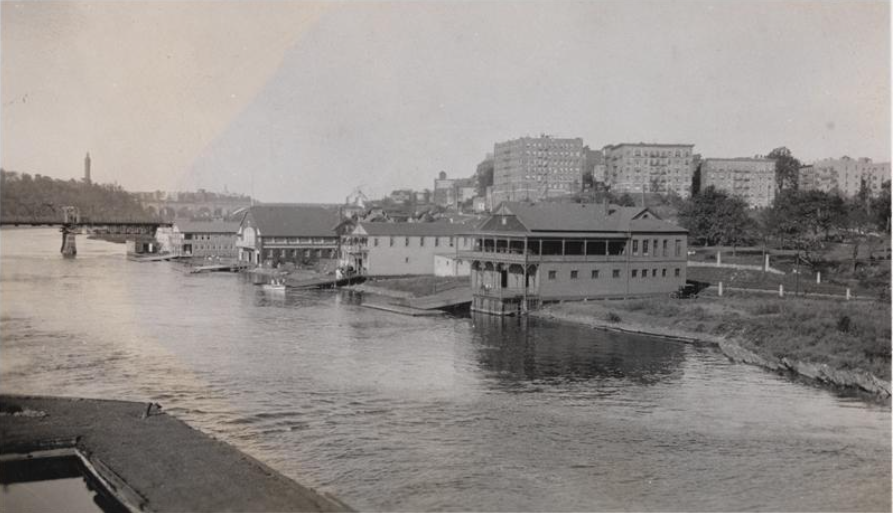 The earliest means of transportation around New York City Harbor, from Harlem to Brooklyn and Staten Island and to trading was moored offshore was rowboats from 96th Street to 155th Street.

The rowboats would unload trade goods at the rear of the buildings.

The boatmen from the rowboats who ferried from ships to coastline regularly had races and rivalries with each other. These early races were the start of rowing in the United States.

Many of the first clubs like Harlem Rowing, the Bohemians were composed primarily of immigrants from one ethnic group, who continued to carry on the traditions from their homeland.

The race among high school crews was popular, as were those among professional organizations. Policeman, trolley car drivers, and Wall Street workers were the first among the professionals that held races on Harlem River.

Harlem had become a rowing centre so much so that it was called “Scullers Row“, because it had over 1,000 rowers by 1902. Some of the best oarsmen in the world came to row along with the Riverside Speedway Course. The most recognized names of early rowing history, including the Biglin Brothers, Thomas Hanlan, and the Ward Brothers Came to Harlem.

Harlem boat club on the Harlem River by B. J. Falk, June 19, 1902. The Harlem Yacht Club (aka Harlem boat club – see photo above), now of City Island, was initially founded at 124th Street and the East River in June of 1883.

It spent most of its first two decades three blocks further south at the old Randall mansion (former home of the same Randalls who owned Randalls Island), and it also operated a ‘station’ at College Point from whence most of its regattas were conducted.

In 1894, the club gave up its station at College Point in favor of one on property it had purchased at City Island. It then occupied both locations – its ‘city house’ at the Randall mansion and its City Island station– for about ten years, even conducting occasional bicycle runs from one house to the other in those early days before the advent of automobiles.

It had towed its College Point clubhouse to the new site at City Island, but decided in 1898 to replace it with a larger structure, and erected a lovely Victorian manse.

Finally, in 1903, the club gave up its headquarters at the Randall mansion in Harlem and took up permanent, and sole, residence at its property in City Island.

The old Victorian building burned in 1915 and was promptly replaced by the club’s current three-story building, which houses a bar, restaurant, and members’ lounge on its main floor, a second-story ballroom, and third-floor offices and steward’s quarters.

From its inception, the Harlem Yacht Club conducted numerous regattas and became known in local waters for its Memorial Day Regatta, which it conducted on its own initiative, then later as part of the YRALIS championship circuit.

For 60 years, this race was said to kick off the yacht racing season in western Long Island Sound. In that golden era of yacht racing, the public could enjoy following a regatta by purchasing a ticket for a steamer that followed the boats around the racecourse.

The steamers could carry up to 2,000 passengers, and this club enjoyed a popular following of such spectators in its early years on the Sound, until the practice ended with the rise of other spectator sports.

The steamers could carry up to 2,000 passengers, and this club enjoyed a popular following of such spectators in its early years on the Sound, until the practice ended with the rise of other spectator sports.

The club also ran several long-distance races such as the HYC Stratford Shoal Race, which ran from 1905 to 1920, and even evolved into a combination sail and powerboat race.

Meantime, the club’s racers also competed, and won honors, in the regattas of other clubs in the YRALIS circuit.

In its 1911 YRALIS Memorial Day regatta, the HYC hosted a historic race – the first regatta of the Star class – a small fixed-keel sloop that became immensely popular in all parts of the world and was in 1932 established as an Olympic Games class and is still raced there today.

In the late ‘30s the HYC became instrumental in the founding of the Eastchester Bay Yacht Racing Association in order to foster the growth of small boat bay sailing.

HYC Race Chairman Sidney J. Treat presided over its first race and for his efforts in promoting Star racing was also appointed Honorary and Life Commodore of the East River Star Fleet. The club boasted a fleet of 12 Stars, and several of the club’s racers were active Star competitors.

Most notable among them were Mike Treat, a champion Sound racer, and Charlie “Buster” Ulmer, who represented the East River Star Fleet in the International Championships in both Lisbon and Havana. “Buster” Ulmer later went on to found Ulmer Sails, now known as UK-Halsey Sailmakers.

With the outbreak of World War II, and because of the depletion of its members to the armed services, the club was forced to abandon the YRALIS Memorial Day Race and its Star racing program dwindled.

In the 1950s, with the rise of powerboats, the club’s members began to lean more heavily toward motor yachts.

In the ‘70s and ‘80s, as sailing reclaimed a measure of its former popularity within the club, the proportion of sailing members again rose to prominence.

The club is currently one of the four City Island yacht clubs which co-sponsor the Eastchester Bay Yacht Racing Association. In addition, the HYC enjoys a number of club races of various types.

These include an around-the-buoy race (Treat Race), an overnight (Higgins Race), a J24 one-design (Hoxsie Race), a short-handed series, and a just-for-fun race called the Vice Commodore’s Regatta in which non-sailor members are recruited to actively crew upon their host member’s sailboat.

Today, the club enjoys a complement of about 150 members, in five categories. Its fleet of 123 boats is comprised of 80% sail and 20% power.

Today, the club enjoys a complement of about 150 members, in five categories. Its fleet of 123 boats is comprised of 80% sail and 20% power.

And, although its membership still draws heavily from the immediate Bronx/Lower Westchester area, it also enjoys a sizeable contingent of New Jerseyans, Manhattanites, and others from points further out, who find its location ideal for accessing the Sound.

All are comfortably accommodated in their beautiful clubhouse on City Island, and the club continues to pride itself as being one of the friendliest on Long Island Sound.