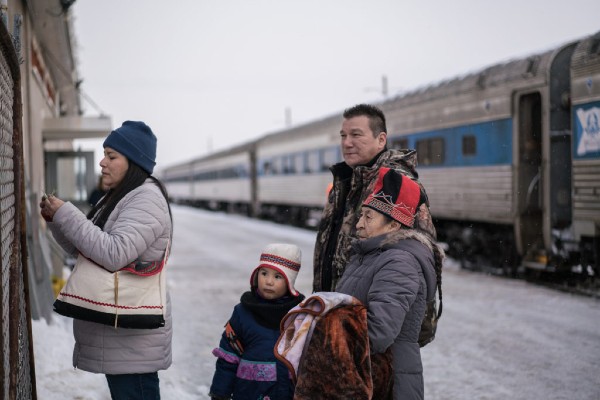 The film was adapted from the acclaimed novel Kuessipan and co-written with the novel’s First Nation Canadian author Naomi Fontaine.

Kuessipan means “your turn” in the Innu language, a title chosen to mark the notion that it is the Innu people’s turn to tell their story.

The story follows two girls who grow up as best friends in a Quebec Innu community. While Mikuan has a loving family, Shaniss is picking up the pieces of her shattered childhood.

As children, they promised each other to be lifelong friends. But as they mature, their lives take different paths, and their personal ambitions diverge leading them to a cultural and identity clash that tests their bond.

Over 20 US independent theaters have signed up to participate in the March 26, 2021, virtual release of KUESSIPAN.

Audiences will be able to choose which theater to support when they purchase tickets by going to https://artmattanfilms.com/kuessipan.  The virtual release will be followed by a digital and home-video release.

“Kuessipan is quiet and mesmerizing and tragic and full of hope. It is a triumph, and a privilege to spend time with.” ~ Globe and Mail

“Myriam Verreault excels at crafting a film told through an Indigenous lens that discusses universal themes of friendship, identity, love, and heartbreak.” ~ Exclaim!

“Heartbreakingly exploring Indigenous identity and the bonds that root us to a community, Kuessipan is a bold ode to young womanhood.” ~ MUBI

Myriam Verreault grew up in Loretteville, a Quebec City suburb. After completing her studies in journalism, history, and cinema. she worked as a props person, director, and editor in the television and film industry.

In 2009, she made a name for herself by co-directing, scripting, producing, and editing West of Pluto, her critically acclaimed debut feature film, which went on to be screened at some 50 festivals around the world.

Myriam started her research and writing for KUESSIPAN in 2012 in collaboration with the writer of the book by the same name, Naomi Fontaine, and spent five hardworking years on it, during which she made multiple immersion trips to the Innu community before beginning to shoot.

ArtMattan Films celebrates in 2021, twenty-nine years of exposing US audiences to a large variety of films about the human experience of people of color in many parts of the world.

Films released by ArtMattan Films include Kirikou and the Sorceress, The Tracker, Gospel Hill, Scheherazade, Tell Me a Story, The Pirogue, Tango Negro: The African Roots of Tango, White Lies, The Man Who Mends Women, The Citizen, Mama Africa: Miriam Makeba and most recently The Last Tree and Made in Bangladesh.