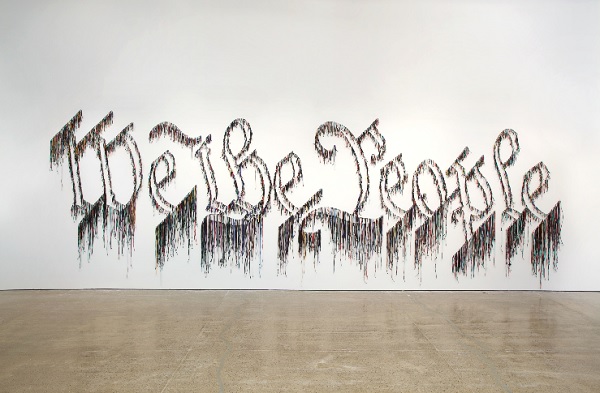 Check out Harlem artist Nari Ward at the New Museum present “Nari Ward: We the People,” on view from February 13 to May 26, 2019.

The first museum survey in New York of the work of Nari Ward (b. 1963, St. Andrew, Jamaica), the exhibition will bring together works spanning Ward’s twenty-five-year career, installed across the three main floors of the Museum. “Nari Ward: We the People” is curated by Gary Carrion-Murayari, Kraus Family Curator; Massimiliano Gioni, Edlis Neeson Artistic Director; and Helga Christoffersen, Associate Curator.

The exhibition will feature over thirty sculptures, paintings, videos, and large-scale installations from throughout Ward’s career, highlighting his status as one of the most important and influential sculptors working today. Since the early 1990s, Ward has produced his works by accumulating staggering amounts of humble materials and repurposing them in consistently surprising ways. His approach evokes a variety of folk traditions and creative acts of recycling from Jamaica, where he was born, as well as the material textures of Harlem, where he has lived and worked for the past twenty-five years. Yet Ward also relies on research into specific histories and sites to uncover connections among geographically and culturally disparate communities and to explore the tension between tradition and transformation.

This presentation will highlight the continued importance of New York, and Harlem in particular, to the material and thematic content of Ward’s art. Many of his early sculptures were created with materials scavenged from buildings and streets in Harlem. These items—baby strollers, fire hoses, baseball bats, cooking trays, bottles, and shopping carts—were chosen for their connection to individual lives and stories within the neighborhood. The exhibition will include several key early works, such as the large-scale environments Amazing Grace and Hunger Cradle (both 1993), which Ward made and exhibited in an abandoned firehouse. That same year, Ward had his first
institutional solo exhibition at the New Museum where he exhibited a dramatic, large sculpture, Carpet Angel (1992).

In his more recent work, Ward directly addresses complex political and social realities that resonate on both a local and a national level, reflecting the profound changes gentrification has brought to Harlem and the increasingly fractured state of democracy in the United States. He uses language, architecture, and a variety of sculptural forms to reflect on racism and power, migration and national identity, and the layers of historical memory that comprise our sense of community and belonging. “Nari Ward: We the People” will bring together many of Ward’s most iconic sculptures alongside a number of works that have not been seen in New York since they were originally created. The exhibition will demonstrate Ward’s status as a key bridge between generations of American sculptors and a vital advocate for art’s capacity to address today’s most urgent issues.

A fully illustrated catalogue copublished by the New Museum and Phaidon Press accompanies the exhibition. The catalogue includes an interview with Nari Ward conducted by Lowery Stokes Sims, as well as newly commissioned essays on the artist’s work.wmuseum.or