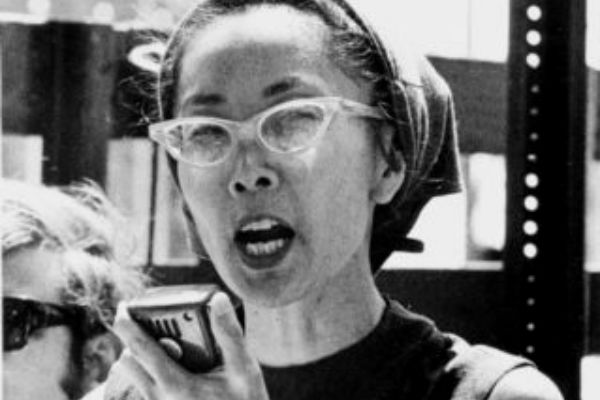 Yuri Kochiyama, Kōchiyama Yuri?, May 19, 1921 – June 1, 2014, was an American political activist. Influenced by her Japanese American family’s internment and her association with Malcolm X, she advocated for many causes, including Black separatism, the anti-war movement, Maoist revolution, reparations for Japanese-American internees, and the rights of people imprisoned by the U.S. government for violent offenses whom she considered to be “political prisoners”. On May 19, 2016, she was featured on the U.S. Google Doodle, sparking controversy.

Mary Yuriko Nakahara was born on May 19, 1921, in San Pedro, California, to Japanese immigrants Seiichi Nakahara, a fish merchant entrepreneur, and Tsuyako (Sawaguchi) Nakahara, a college-educated homemaker and piano teacher. She had a twin brother, Peter, and an older brother, Arthur. Her family was relatively affluent and she grew up in a predominantly white neighborhood. In her youth she attended a Presbyterian church and taught Sunday school. Kochiyama attended San Pedro High School, where she served as the first female student body officer, wrote for the school newspaper, and played on the tennis team. She graduated from high school in 1939. She attended Compton Junior College, where she studied English, journalism, and art. Kochiyama graduated from Compton in 1941.

Her life changed on December 7, 1941, when the Japanese Empire bombed Pearl Harbor. Soon after she returned home from church, FBI agents arrested her father as a potential threat to national security. He was in poor health, having just come out of hospital. The FBI were suspicious of photographs of Japanese naval ships found in the family home and his friendship with prominent Japanese, including Ambassador Kichisaburō Nomura. Nakahara’s six-week detention aggravated his health problems, and by the time he was released on January 20, 1942, he had become too sick to speak. Her father died the day after his release.

In 1960, Kochiyama and her husband moved their family to Harlem and joined the Harlem Parents Committee and the Congress of Racial Equality (CORE).

Soon after the death of her father, United States President Franklin D. Roosevelt issued Executive Order 9066, which forced out approximately 120,000 people of Japanese ancestry from the Pacific coast and interned them at various camps across the United States. Yuri, her mother, and her brother were “evacuated” to a converted horse stable at the Santa Anita Assembly Center for several months and then moved again to the War Relocation Authority internment camp at Jerome, Arkansas, where they lived for the next three years. While interned, she met her future husband, Bill Kochiyama, a Nisei soldier fighting for the United States. The couple married in 1946. They moved to New York in 1948, had six children, and lived in public housing for the next twelve years. In 1960, Kochiyama and her husband moved their family to Harlem and joined the Harlem Parents Committee and the Congress of Racial Equality (CORE).

She was present at his assassination on February 21, 1965, at the Audubon Ballroom in Washington Heights, New York City, and held him in her arms as he lay dying.

Kochiyama met the African-American activist Malcolm X, at the time a prominent member of the Nation of Islam, in October 1963 during a protest against the arrest of about 600 minority construction workers in Brooklyn, who had been protesting for jobs. Kochiyama joined his pan-Africanist Organization of Afro-American Unity.

She was present at his assassination on February 21, 1965, at the Audubon Ballroom in Washington Heights, New York City, and held him in her arms as he lay dying. A famous photo appeared in Life magazine capturing that moment. Kochiyama also had close relationships with many other revolutionary nationalist leaders including Robert F. Williams (who gave Kochiyama her first copy of Mao’s Little Red Book). Kochiyama became a mentor to the radical end of the Asian American movement that grew during and after the Vietnam War protests. As organizers of East Coast Japanese Americans for Redress, Yuri and Bill advocated for reparations and a government apology for the incarceration of Japanese Americans during World War II, and spearheaded the campaign to bring the Commission on Wartime Relocation and Internment of Civilians to New York. President Ronald Reagan signed the Civil Liberties Act in 1988 which, among other things, awarded $20,000 to each Japanese American internment survivor. In later years, Kochiyama was active in opposing profiling of and bigotry against Muslims, Middle Easterners, and South Asians in the United States, a phenomenon she viewed as similar to the experience of Japanese Americans during World War II.

In 1971, Kochiyama secretly converted to Sunni Islam, and began traveling to the Sankore mosque in Greenhaven Prison, Stormville, New York, to study and worship with Imam Rasul Suleiman.

Kochiyama also taught English to immigrant students and volunteered at soup kitchens and homeless shelters in New York City. Kochiyama spoke at over 100 high schools and colleges in at least 15 states and Canada, including Harvard, Radcliffe, Yale, Princeton, Spelman, Temple, UMass/Amherst, New York University, UC Berkeley, and San Francisco State University. In Debbie Allen’s television series Cool Women (2001), Kochiyama stated, “The legacy I would like to leave is that people try to build bridges and not walls.”

Kochiyama has been described as a woman of “complicated political beliefs” and at times “contradictory views” who managed to combine support for both racial integration and separation. Dylan Matthews has described some of her work as “clearly, deeply admirable”, but cautioned that she sometimes admired “truly loathsome figures, because she thought they were effective at combating American empire”, such as Mao Zedong and Ho Chi Minh.

Kochiyama supported the Peruvian Maoist guerrilla group Shining Path which has been widely condemned for its violent terrorism and brutality against civilians. She joined a delegation to Peru, organized by the Maoist Revolutionary Communist Party, to gather support for Abimael Guzmán, the imprisoned leader of the Shining Path. Kochiyama stated “the more I read, the more I came to completely support the revolution in Peru.”

Kochiyama in the mid-1960s joined the Revolutionary Action Movement, a black nationalist organization dedicated to urban guerrilla warfare which was one of the first organizations in the black liberation movement to attempt to construct an ideology based on a synthesis of the thought of Malcolm X, Marx, Lenin, and Mao Zedong. In 1968 she was one of the few non-blacks invited to join the Republic of New Africa which advocated the establishment of a separate black nation in the Southern United States. Kochiyama joined and subsequently sided with, an RNA faction that felt that the need to build a separate black nation was even more important than the struggle for civil rights in Northern cities. After Kochiyama became a “citizen” of the RNA she decided to drop her “slave name” Mary and used only the name Yuri.

Kochiyama founded and sustained the David Wong Support Committee, which after a fourteen-year battle succeeded in exonerating Wong of the murder of a fellow inmate. Kochiyama wrote letters to, fundraised for, and visited Wong in prison.

Kochiyama’s most relentless area of struggle came to be her support for those she saw as political prisoners and victims of FBI oppression. She worked on behalf of Mumia Abu-Jamal, an African-American activist sentenced to death in 1982 for the 1981 murder of Philadelphia police officer Daniel Faulkner. She was a friend and supporter of Assata Shakur, an African-American activist and member of the former Black Liberation Army (BLA), who had been convicted of several crimes including the first-degree murder of a New Jersey State Trooper before escaping from U.S. prison and receiving asylum in Cuba. She stated that to her Shakur was like “the female Malcolm [X] or the female Mumia [Abu-Jamal].” She also supported Marilyn Buck, a feminist poet, who was imprisoned for her participation in Shakur’s 1979 prison escape, the 1981 Brink’s robbery and the 1983 U.S. Senate bombing.

In 1977, Kochiyama joined a group of Puerto Ricans who took over the Statue of Liberty to draw attention to the struggle for Puerto Rican independence. Kochiyama and other activists demanded the release of four Puerto Rican nationalists convicted of attempted murder—Lolita Lebrón, Rafael Cancel Miranda, Andres Figueroa Cordero, and Irving Flores Rodríguez—who in 1954 had opened fire in the House of Representatives, injuring five congressmen. The nationalists occupied the statue for nine hours before giving up peacefully when the police moved in. President Carter pardoned the attempted assassins in 1979.

Kochiyama also supported Yū Kikumura, an alleged member of the Japanese Red Army, who was arrested in Schiphol Airport in Amsterdam in 1986 when he was found carrying a bomb in his luggage and subsequently convicted of planning to bomb a US Navy recruitment office in the Veteran’s Administration building. Kochiyama felt Kikumura’s 30-year sentence was motivated by his political activism.

In response to the United States’ actions following the 2001 September 11 attacks, Kochiyama stated that “the goal of the war [on terror] is more than just getting oil and fuel. The United States is intent on taking over the world” and “it’s important we all understand that the main terrorist and the main enemy of the world’s people is the U.S. government.”

Interviewed in 2003, she said, “I consider Osama bin Laden as one of the people that I admire. To me, he is in the category of Malcolm X, Che Guevara, Patrice Lumumba, Fidel Castro … I thank Islam for bin Laden. America’s greed, aggressiveness, and self-righteous arrogance must be stopped. War and weaponry must be abolished.”

In 2010, she received an honorary doctorate from California State University, East Bay.

On June 6, 2014, the White House honored Kochiyama on its website for dedicating “her life to the pursuit of social justice, not only for the Asian American and Pacific Islander (AAPI) community but all communities of color.”

On May 19, 2016, the U.S. Google Doodle honored the 95th anniversary of Kochiyama’s birthday, prompting both praises for Kochiyama’s activism and criticism of her support for terrorists, dictators, and violent revolutionaries. Senator Pat Toomey (R-PA) called for a public apology from Google