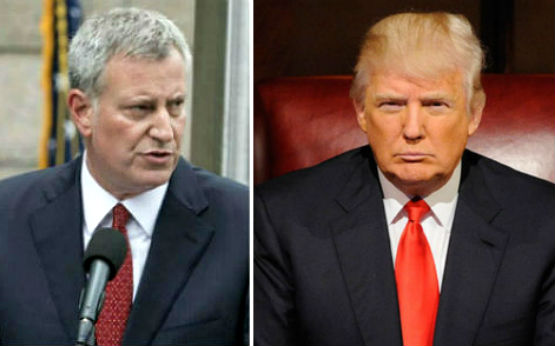 A threat by President Donald Trump to defund New York City over what he called “anarchy, violence, and destruction” prompted equally harsh pushback.

The memo signed by Trump on Wednesday orders a review of federal funds going to New York City, Seattle, Portland, and Washington, D.C. — four cities with recent protests and, at times, violence.

“My Administration will not allow Federal tax dollars to fund cities that allow themselves to deteriorate into lawless zones,” the memo states.

Trump’s order dovetails with his recent campaign rhetoric painting “Democrat” cities as beset by anarchy and violence. The memo paints a grim picture of New York City in the grips of looting and a wave of “unconscionable” gun violence.

Looting did occur during the first days of protests over the killing of George Floyd and the city has seen a 166 percent spike in shootings. But the anarchistic hellscape depicted by Trump likely would be unfamiliar to many New Yorkers in Harlem or in Hollis.

“From the point of view of New York City, this has been the worst president in history,” Cuomo said Wednesday in a hastily-organized conference.”… President Trump has actively been trying to kill New York City ever since he’s been elected and it’s a personal animus as it normally is with the President. I think it’s because he is from New York City and New York City rejected him always. He was dismissed as a clown in New York City.”

That’s the worst record on the globe, he said reported Patch.

“As far as this statement he’s going to stop funding for New York City — he’s not a king,” Cuomo said. “He thinks he’s a king but he’s not. He’s a President. But there’s the Constitution and there are laws, nothing that he knows anything about.”

“As much as Donald Trump wants New York City to drop dead, we will never let this stand,” tweeted mayor’s spokesperson Bill Neidhardt. “This has nothing to do with ‘law and order’. This is a racist campaign stunt out of the Oval Office to attack millions of people of color.”